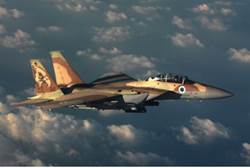 Israeli air force jets bombed trucks carrying Syrian missiles bound for Hizbullah’s warehouses in Lebanon, according to Syrian opposition sources. The sources, were cited Sunday by Voice of Israel radio’s Arabic-language service, which was quoted by i24 News.

The Friday night bombing reportedly targeted a Syrian military base near the town of Quneitra, not far from the Golan Heights cease-fire line.

This was the fifth known Israeli attack this year on Syrian weapons bound for Hizbullah. Syrian strongman Bashar al-Assad reportedly wants to send the weapons to Hizbullah for safekeeping, out of fears they will fall into the hands of the rebels forces fighting him inside Syria, whilst the Iranian-backed terrorist group seeks “game changing weapons” – such as anti-aircraft missiles – in exchange for its costly intervention in the Syrian civil war on behalf of the Syrian regime.

In the most recent such reported attack, a series of explosions rocked the Syrian port of Latakia, on July 5.

The explosions were the result of strikes by Israeli warplanes, multiple U.S. officials told CNN.

Regional media widely reported the predawn explosions at Latakia on July 5, but no one had officially claimed responsibility.

Three U.S. officials told CNN the target of the airstrikes were Russian-made Yakhont anti-ship missiles that Israel believes posed a threat to its naval forces.

The Syrian rebels said that “foreign forces” had destroyed the missiles in Latakia, hinting that Israel may have been behind the attack.

Other reports credited Israeli submarines with the attacks.

– From Turkey With Love: Another Israeli Attack On Syria? (RT)

Getting the ‘response team’ ready: