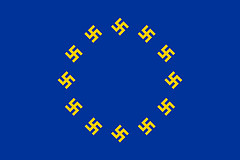 Once upon a time (in April), a few weeks after reversing its initial disastrous decision to haircut all deposits (including insured ones) the Troika slammed large Cypriot depositors (read evil Russian oligarchs) with a “bail-in” template, soon coming to all insolvent European nations, that included not only a forced assignment of equity in broke Cypriot banks, but far more importantly a haircut that amounted to 37.5% of deposits over €100,000. Since then a few things have happened in Cyprus, neither of them good, i.e., an a record collapse in bank deposits despite capital controls and a record crash in the local real estate market.The confluence of both these events meant that as bank liabilities shrank (deposits), asset fair values (home mortgages) collapsed even faster. Which, as we warned in March, would entail bigger and more aggressive deposit haircuts, and ultimately: another bailout of Cyprus (something the president floated but promptly denied upon rejection by Merkel ahead of her September elections). Today, we learn that while the inevitable next bailout of Cyprus is still on the table, the deposit “haircut” just upgraded to an aggravated Brazilian wax, as the 37.5% gentle trim initially proposed was revised to 47.5%.

The Finance Ministry and the Troika appeared to be converging on an agreement on the haircut of uninsured deposits over 100,000 euros in the Bank of Cyprus at 47.5%.

After marathon negotiations at the Finance Ministry further talks continued at Central Bank until late into the night with Finance Minister Haris Georgiades focussing on the technical issues that had arisen.

“They are very close to an agreement but some technical issues have risen and they are dealing with it,” a source close to the negotiations told The Cyprus Daily.

Under a programme agreed between Cyprus and its international lenders in March, large depositors in BoC were asked to pay for the recapitalisation of the bank.

Authorities initially converted 37.5% of deposits exceeding €100,000 into equity and an additional 22.5% as a buffer in the event of further needs.

The Troika, who are here assessing Cyprus’s loan adjustment programme until the end of the month demanded, a 47.5% haircut on uninsured deposits at BoC while the Finance Ministry was drawing the line at 45%, the sources said.

“The final agreement for the haircut will hover around 47.5% but that remains to be seen as negotiations will continue until late at night and announcements will be made tomorrow (Monday),” they added.

Alas, we have bad news for Cyprus, or rather for those evil oligarchs (and other innocent and naive people who believed the lies) who still haven’t managed to bribe enough local bankers and pull what remains of their money: the “final” haircut will be far higher than 47.5%. And at a 10% rate of increase every 3 months, we expect the final 60%+ haircut to be revealed some time before the end of the year.