What could possibly go wrong? WW3 anyone?

– Russia Says It Will Not Allow Syria No-Fly Zones 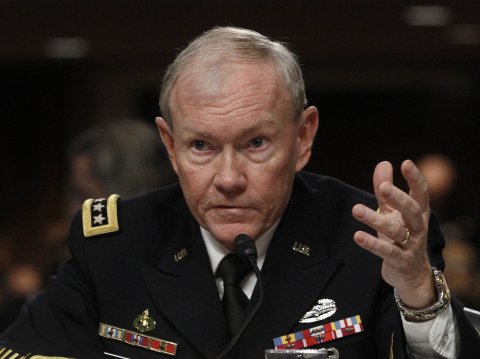 ﻿America’s top military officer told a Senate committee that the Obama administration is considering the use of military force in Syria, Richard Lardner of the Associated Press reports.

U.S. Army General Martin Dempsey testified that he has provided President Barack Obama with options for the use of force in Syria, including “kinetic strikes.”

The military is constantly laying out potential courses of action, but Dempsey’s comments signal at least a willingness to directly enter the conflict.

The issue “is under deliberation inside of our agencies of government,” the four-star general said.

In March Dempsey implied military force would be a bad idea: “I don’t think at this point I can see a military option that would create an understandable outcome. And until I do, it would be my advice to proceed cautiously.”

U.S. military options range from one-off missile strikes on infrastructure linked to chemical weapons, to funneling more weapons to rebels, to carving out no-fly zones, and even as far as putting 20,000 U.S. troops in Jordan for a ground invasion.

“Senator, I am in favor of building a moderate opposition and supporting it,” Dempsey said on Thursday. “The question whether to support it with direct kinetic strikes … is a decision for our elected officials, not for the senior military leader of the nation” (emphasis ours).

Also on the table are drone strikes targeting rebels linked to al-Qaeda, which indicates that America would actually be attacking the strongest elements on both sides of the conflict.

Now that is complete BS!

We are arming and training Al-Qaeda in Syria, but we are losing the war, which is why Dempsey considers more intervention.

Well, it does if you consider the following links: