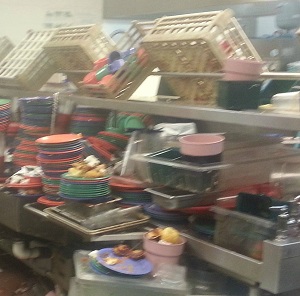 Shocking photos posted on the internet claim to show behind-the-scenes filth at a Golden Corral restaurant. The photos appear to show filthy dishes stacked nearly head-high, with food waste littering the floor right next to beverage service carts. Three employees are clearly depicted in the photos, and they appear to be wearing uniforms consistent with those worn by Golden Corral employees.

The photos (see below) also show overflowing trash cans and food refuse so thick that employees are walking all over it while mountains of filthy dishes appear to be ready to collapse onto the floor.

All photos are shown below.

Adding to the apparent filth, a young man who claims to be a Golden Corral employee has posted a shocking video that he says shows Golden Corral hiding fresh meat near dumpsters while the restaurant undergoes an inspection. Once the inspection is over, he explains, the food will be carted back into the restaurant and served up to hungry customers (but without all the flies).

Below, take a look at some of the shocking photos from the dishes area. All the bolded comments are my own…

Hey, do I get free Obamacare with this job? 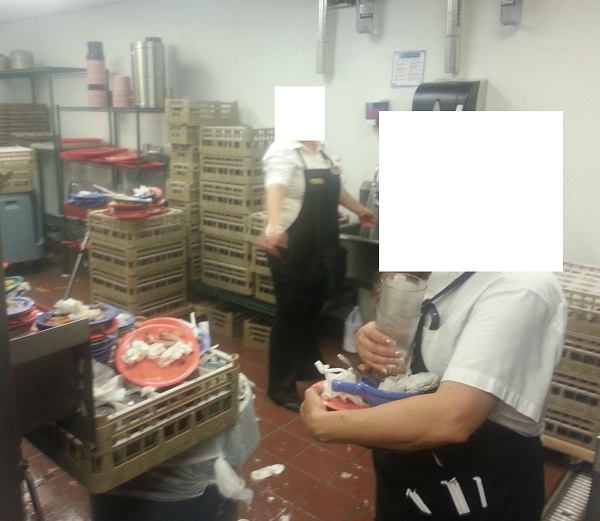 And to think, this was just the appetizer round! 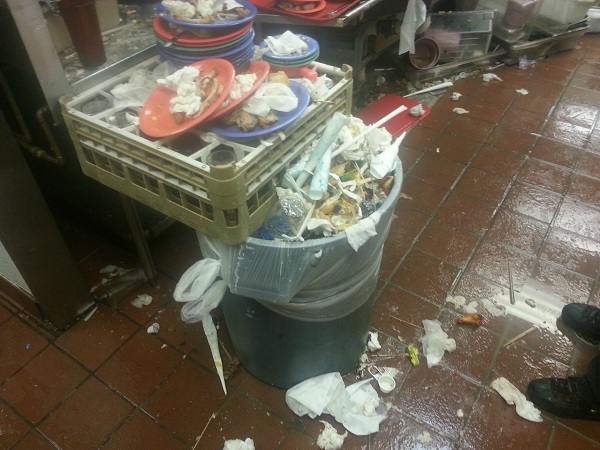 Everybody FREEZE! Or this whole thing may collapse and we’ll have to excavate our way out! 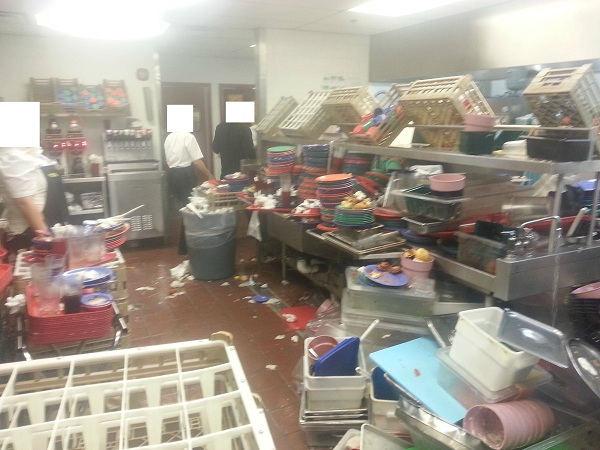 By the way, how do we know these are Golden Corral employees and not people working at some random restaurant? The name badge and uniforms give it away. 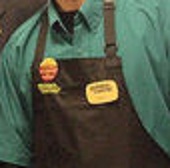 Now take a look at a zoomed-in image of the black apron and name tag from the “dirty dishes” photo shown above: 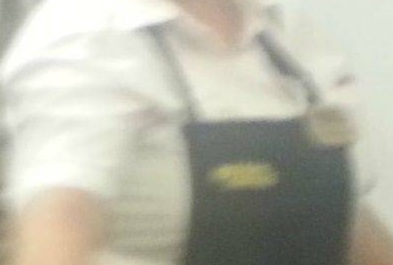 Hungry for some “dumpster ribs?” A man named Brandon Huber posted a jaw-dropping video a few days ago which has already garnered over one million views. The video claims to show fresh food being temporarily “hidden” in the dumpster trash area behind the restaurant while Golden Corral undergoes an inspection.

Here are some of the stills from the video, just in case they pull the video:

Here’s Brandon Huber who rocketed to fame as a fast food whistleblower: 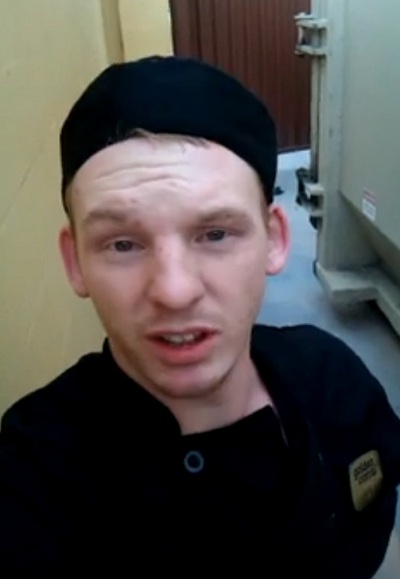 Check out the meat patties, baby back ribs and some sort of mystery sauce, all being stored in the open air with flies everywhere. And don’t miss the hydraulic cables in the background — they’re connected to the trash compactor! 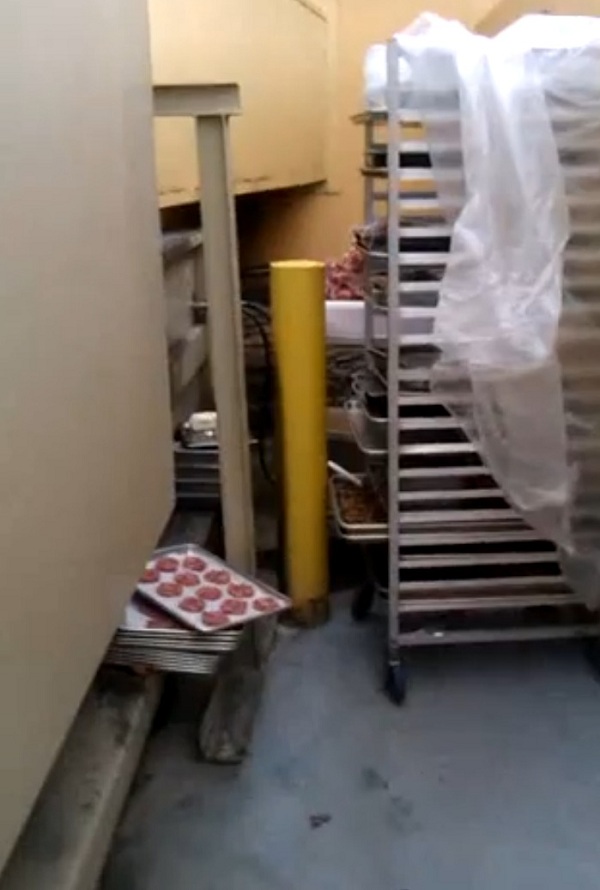 Here’s another look at the “dumpster meat” that Huber claim will be wheeled back into the Golden Corral restaurant and served to customers. 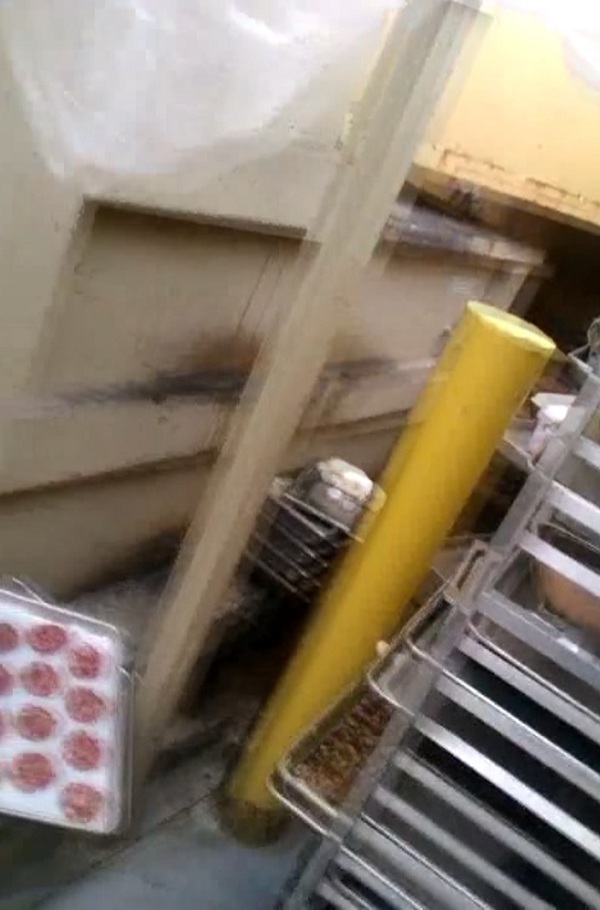 And finally, here’s a close-up of those baby back ribs sitting just inches away from hydraulic cables that power the trash compactor. Delicious, huh? 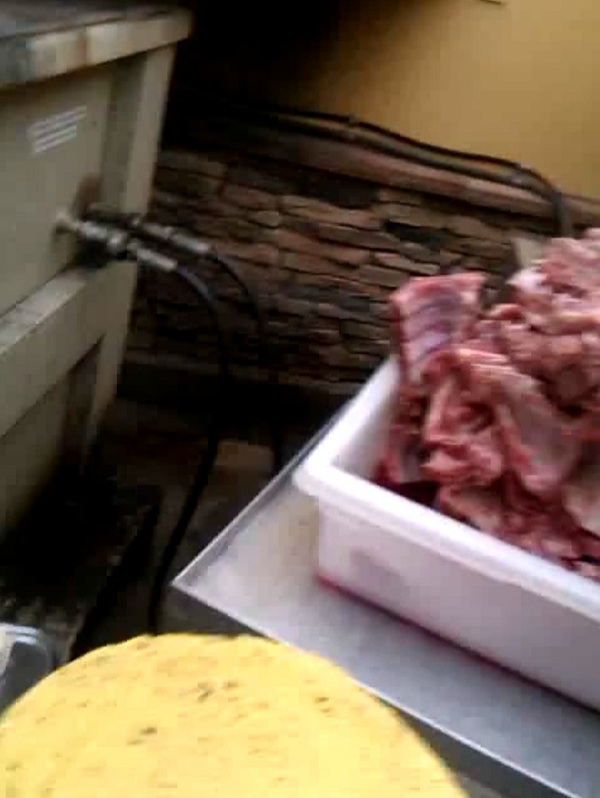 He says, “To me, as an employee here, I would not eat this stuff!”

Is it safe to eat at Golden Corral?

Let’s face it: If you’re eating at Golden Corral, your taste in food is only slightly more sophisticated than that of a farm hog. When it comes to fast food on a grand scale, nobody serves up quantity over quality better than Golden Corral. I actually call it the “Golden feedlot” where humans are fattened up like cattle, then they waddle out the front doors and back into their oversized vehicles so they can go home and take their insulin shots.

That being said, in all fairness these photos and videos may not represent the way Golden Corral restaurants are operated nationwide. (Dear God let’s hope not…)

These could be worst-case restaurants being managed by incompetent personnel who willfully violate food safely laws and regulations. Then again, on the other hand these photos might only scratch the surface of far worse horrors lurking in the kitchens of restaurants everywhere. There’s no way to tell unless we somehow conduct a nationwide undercover covert camera operation or more employees start blowing the whistle.

But the far more important question in all this is now that Brandon Huber has become a whistleblower who exposes the darkest secrets of American society, will Venezuela grant him political asylum?

Share these photos… if you dare… and somebody give Brandon Huber a humanitarian award of some kind! We need more whistleblowers like this guy in the food industry!

1 thought on “Now That Is Totally Disgusting: Golden Corral (Shocking Photos And Video)”