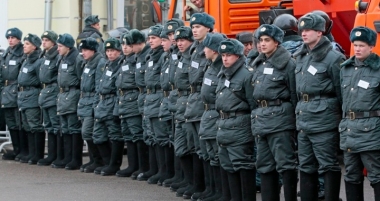 Following outrage and controversy last year over the Obama administration’s unprecedented decision to invite Russian troops for terror drills on U.S. soil, the U.S. Federal Emergency Management Agency (FEMA) is now under fire for signing more agreements to “cooperate” with Vladimir Putin’s Russian “Emergencies Ministry” (EMERCOM) in a wide array of fields. Among the controversial deals outlined in an official Russian press release: exchanging of “experts” and “experience,” “provision of security at mass events,” and “cooperation in disaster response operations.” Critics of the scheme reacted with a mixture of fury and deep concerns.

After the news was picked up in the alternative media, it quickly went viral, stirring widespread fears that Russian forces could be deployed inside the United States under the bogus guise of “security.” Officials from both governments rushed to deny the speculation, trying to downplay the agreements as merely routine international collaboration. However, it remains unclear why the American people would need or want any sort of “assistance” from the Russian government, which, despite the supposed fall of communist tyranny, is still widely regarded as a lawless gangster regime.

According to government press releases and statements by officials, the latest agreement between the Department of Homeland Security’s FEMA and the Russian Emergency Situations Ministry provides for “expert cooperation in disaster response operations” and further “study” of latest practices. “In addition, the parties approved of U.S.-Russian cooperation in this field in 2013-2014, which envisages exchange of experience including in monitoring and forecasting emergency situations, training of rescuers, development of mine-rescuing and provision of security at mass events,” continued a statement released by EMERCOM after the summit, adding that the level of cooperation between the two governments would continue to develop.

Apparently, protecting the planet from potential threats from space was on the agenda as well. “We have decided that the U.S. Federal Emergency Management Agency (FEMA) and Russia’s Emergencies Ministry will work together to develop systems to protect people and territory from cosmic impacts,” claimed Russian “Emergencies Minister” Vladimir Puchkov in a statement to journalists. “I believe we can make a technological breakthrough in this area if the Emergencies Ministry and FEMA supervise this project, attracting the finest minds and research groups including in Canada, Europe, China, and Southeast Asia.”

The extra-constitutional “agreements” were inked late last month in Washington, D.C., at the fourth annual meeting of the so-called “U.S.-Russia Bilateral Presidential Commission Working Group on Emergency Situations.” The shady outfit, formed under the Obama administration, is one of almost two dozen similar “working groups” bringing together top U.S. and Russian officials. The bodies are cooperating on everything from the drug war and agriculture to terror, science, “rule of law,” health, environment, energy, nuclear issues, education, culture, media, business, arms control, and more, according to the U.S. State Department. The Senate has not ratified any of the international deals, as required by the Constitution.

“The [Emergency Situations] Working Group promotes enhanced U.S.-Russia cooperation in the field of emergency management,” the State Department says online about its controversial scheme. “In partnership with a wide range of U.S. and Russian agencies, including the Russian Ministry of Foreign Affairs and EMERCOM, the U.S. Departments of State, Homeland Security, Defense, FEMA, and the U.S. Agency for International Development (USAID) have conducted many joint-exercises, exchanges, and conferences with the goal of sharing best practices and improving emergency response capabilities.”

News about the most recent round of agreements between FEMA and EMERCOM first went viral after being reported by the alternative site Infowars, which has readership numbers that dwarf more than a few establishment media sources. Citing the EMERCOM government press release, reporter Paul Joseph Watson said the agreements suggested that some major public events in the United States could rely in part on authorities from Russia to provide security. As the report pointed out, that would be a violation of federal law — not to mention the Constitution.

Commenting on the FEMA deal with Russian authorities, popular conservative talk-radio host Michael Savage called for the arrest of responsible U.S. officials. “You know who FEMA is — don’t you? — the people with the camps ready for you,” he said on July 1, also suggesting that Russian troops would be providing “security” at events in the United States in violation of Posse Comitatus restrictions. Throughout the segment on the U.S.-Russia agreements, Savage continually referred to the Obama administration as a criminal regime that needed to be stopped.

“Many people fear that this government is getting ready for some major action against the people, they think that this gang that targeted its political enemies through the IRS and the NSA is getting ready to use foreign troops on our soil who will not hesitate to shoot to kill,” he continued. “This is illegal. Whoever signed it for the U.S. government should go to prison… This is what’s emerged under this criminal administration… Obama is a gangster — he’s running the country like he’s a gangster commander.”

The New American reached out to FEMA and other relevant U.S. agencies for comment through multiple channels, but officials did not respond to repeated requests. Instead, a spokesman for FEMA tried to downplay the bilateral “agreements” in a statement offered to Kremlin-funded media outlets, saying there would be “no exchange of security or military personnel” under the latest bilateral arrangement. “The agreement continues information-sharing meetings and observation opportunities with first responders and emergency managers,” the unidentified FEMA spokesman claimed, adding that the dubious “partnership” between U.S. and Russian authorities existed for 17 years.

In the 1950s, congressional investigator Norman Dodd was tasked with investigating the subversive activities of major tax-exempt foundations. As part of the project, Dodd said he spoke with Ford Foundation President Rowan Gaither, who reportedly told him that the immensely powerful institutions were working under White House directives. “The substance of the directives under which we operate is that we shall use our grant-making power to so alter life in the United States that we can be comfortably merged with the Soviet Union,” Gaither is widely quoted as having told Dodd.

Indeed, more than a few independent researchers came to similar conclusions. The Infowars report about the FEMA agreements, for example, cites State Department Publication 7277. Entitled Freedom From War: The United States Program for General and Complete Disarmament in a Peaceful World, this document was presented by the Kennedy administration to the United Nations in 1961. Long quoted by the John Birch Society and other opponents of world government, it outlines the official U.S. government policy to progressively disarm the world while strengthening the United Nations and the capabilities of its armed forces. The eventual goal, in essence, is to create a global government under the UN with a monopoly on force that would merge the “Free World” with the countries already enslaved under communist dictatorships.

While cooperation between Western governments and U.S. administrations has been steadily increasing since the supposed collapse of the communist Soviet Union, President Obama has increased the depth and scope of that “partnership” to unprecedented levels. Among the most stunning examples of Obama’s cozy relationship with Russian authorities: telling then-Russian President Dmitry Medvedev that after the 2012 election he would have “more flexibility,” continually praising the Russian government while cutting back America’s nuclear arsenal, defying Congress and federal law to send U.S. taxpayer money to the Russian military, inviting Russian troops to Colorado for terror drills, and more.

Of course, the controversial agreements between FEMA and EMERCOM make up just one small piece of the larger puzzle and the big picture. As The New American has documented extensively, the plan to foist a dictatorial one-world government on humanity has been in the works for many decades — likely more than a century, at least. Cooperation between the U.S. government and Russian authorities would obviously be central to the scheme. In recent years, the troubling trends have been accelerating quickly, and without a major outcry by the American people, there will be little standing in the way of the global establishment’s sinister plot.