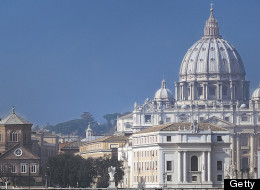 So far, four people have formally been placed under investigation by Rome magistrates, The Times reports.

The newspaper adds: “His allegations gained some credibility from the fact he was accompanied by Monsignor Luca Lorusso, an adviser to the Papal Nuncio to Italy, who is himself a confidante of Pope Francis”.”

The former police officer is alleged to have procured mostly eastern European immigrant boys from gay discos, saunas and outside a bar near Rome’s central rail station known as “Twink”, where he used a vehicle marked “Emergency Blood” to avoid parking fines.

The allegations are rejected by the Vatican, CathNewsUSA reports.

Cardinal Agostino Vallini, head of the Catholic Vicariate of Rome said Poggi’s claims were made from a desire for vengeance.

He said: “The cardinal expresses his full confidence in the magistracy and declares himself fully convinced that this slander will be demolished, demonstrating Poggi’s claims to be untrue.

“God will hold everyone accountable for their deeds.”