He obviously doesn’t want to end up like Bradley Manning. 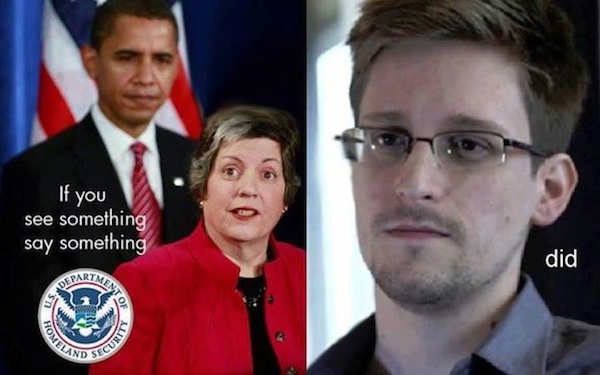 “The Government of Ecuador has received an asylum request from Edward J. #Snowden,” Ecuadoran Foreign Minister Ricardo Patiño Aroca tweeted today hours after a plane believed to be carrying Snowden landed in Moscow from Hong Kong, where Snowden had been hiding. ﻿﻿

MOSCOW — Anti-secrecy group WikiLeaks says a former National Security Agency contractor wanted by the United States for revealing highly classified surveillance programs is going to Ecuador to seek asylum. The group said in a statement Sunday that Edward Snowden is “bound for the Republic of Ecuador via a safe route for the purposes of asylum, and is being escorted by diplomats and legal advisors from WikiLeaks.”

The plane carrying whistleblower Edward Snowden has landed at Moscow’s Sheremetyevo airport. The former CIA contractor, who left Hong Kong in a bid to elude US extradition on espionage charges, is on his way to a ‘third country’ via Russia.

RT’s source reported a doctor from the Ecuadorian embassy in Moscow has examined Snowden on his arrival.

Earlier on Sunday, a spokesperson from the Hong Kong government confirmed that Edward Snowden had “legally and voluntarily” left the country.

“Mr. Edward Snowden left Hong Kong today (June 23) on his own accord for a third country through a lawful and normal channel,” said the Hong Kong government in a press release. The statement also said the documents for Snowden’s extradition submitted by Washington “did not fully comply with the legal requirements under Hong Kong law.”

“As the HKSAR Government has yet to have sufficient information to process the request for a provisional warrant of arrest, there is no legal basis to restrict Mr. Snowden from leaving Hong Kong.”

WikiLeaks legal aidWhistleblowing organization WikiLeaks has rallied behind Snowden and said they are assisting him in his bid for political asylum in a “democratic country.” The group announced on Twitter that they helped obtain “travel documents” and ensured his safe exit from Hong Kong. Diplomats and legal advisors from WikiLeaks legal team were also accompanying the NSA leaker on his flight to Moscow, WikiLeaks said in a statement.

HONG KONG — Hong Kong has risked the threat of US reprisals in allowing Edward Snowden to leave. But its government insists that the rule of law took primacy for a territory that jealously guards its separateness from mainland China.