And who said, when Bilderberg Josef Ackerman left Deutsche, that things will get very interesting soon enough?

Back in May 2012, when we were making fun at the latest iteration of the now fatally discredited European stress tests, we took the first of many jabs at the what may currently be the world’s most systematically important, and undercapitalized, bank in the world:

Finally, if anyone is still confused where the pain is headed next, here is a list from Morgan Stanley of all Euro banks with a Core Tier 1 ratio that is so low, that the banks will soon regret not raising more capital in the period of calm that the ECB’s LTRO bought them.

That’s right – Deutsche Bank was so bad that it wasn’t even allowed to appear on a screen of Europe’s most undercapitalized banks – and we helpfully pointed out its true capital ratio of just under 2%, and an implied leverage of 60x!

Fast forward 13 months to a Reuters interview with former Kansas City Fed president and FOMC dissenter and sole voice of reason at the Federal Reserve, and current FDIC Vice Chairman Tom Hoenig, who confirmed that once again Zero Hedge was just a year ahead of the curve.

A top U.S. banking regulator called Deutsche Bank’s capital levels “horrible” and said it is the worst on a list of global banks based on one measurement of leverage ratios. “It’s horrible, I mean they’re horribly undercapitalized,” said Federal Deposit Insurance Corp Vice Chairman Thomas Hoenig in an interview. “They have no margin of error.”  Deutsche’s leverage ratio stood at 1.63 percent, according to Hoenig’s numbers, which are based on European IFRS accounting rules as of the end of 2012.

In other words, the slighest systemic shock in Europe and Deustche Bank gets it. And as Deutsche Bank goes, so does Germany, so does Europe, so does the world.

Immediately confirming Hoenig’s (and Zero Hedge’s) observations, was Deutsche’s prompt repeat that “all is well” and that “these numbers” are not like “those numbers.”

“To say that we are undercapitalized is inaccurate because if you look at the Basel framework, we’re now one of the best capitalized banks in the world after our capital raise,” Deutsche Bank’s Chief Financial Officer Stefan Krause told Reuters in an interview, when asked about Hoenig’s comments. “To suggest that leverage puts us in a position to be a risk to the system is incorrect,” Krause said, calling the gauge a “misleading measure” when used on its own.

Of course, DB’s lies are perfectly expected – after all it is a question of fiath. So let’s go back to Hoenig who continues to be one of the few voices of reason among the “very serious people”:

Hoenig pointed to the gain in Deutsche Bank shares in January on the same day it posted a big quarterly loss, because it had improved its Basel III capital ratios by cutting risk-weighted assets.

“My other example with poor Deutsche Bank is that they lose $2 billion and raise their capital ratio. It’s – I don’t want to say insane, but it’s ridiculous,” Hoenig said.

A leverage ratio is a better method to show a firm’s ability to absorb sudden losses, Hoenig says, and he has floated a plan to raise the ratio to 10 percent. He said the 3 percent leverage hurdle under Basel was a “pretend number.”

Opponents of using such a ratio say that it ignores the risk in a bank’s loan books, and can make a bank with only healthy borrowers look equally risky as a bank whose clients are less likely to pay back their loans. It also fails to take into account how easily a bank can sell its assets – so-called liquidity – or whether it is hedged against risk.

But just as we were about a year ahead with our warning of DB’s “off the charts” leverage, so we wish to remind readers that some time around June 2014, the topic of Deutsche Bank’s $72.8 trillion in derivatives, or about 21 times more than the GDP of Germany, will be the recurring news headline du jour.

Recall from April: “At $72.8 Trillion, Presenting The Bank With The Biggest Derivative Exposure In The World (Hint: Not JPMorgan)” which for those who missed it, we urge rereading: 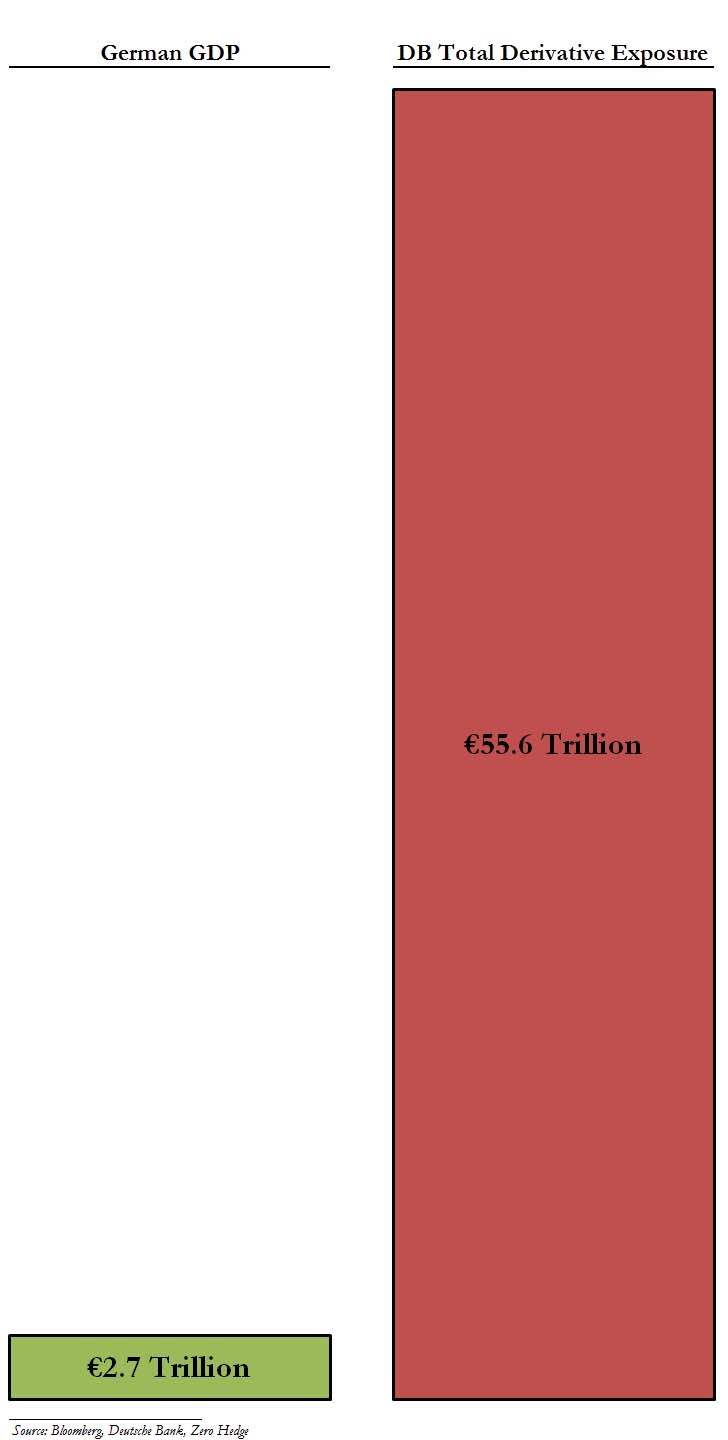