– Here Is The Very Long List Of U.S. Weapons Designs And Technologies Compromised By Chinese Hackers

﻿The charge by a defense panel comes a month visit by China’s president to Calif. 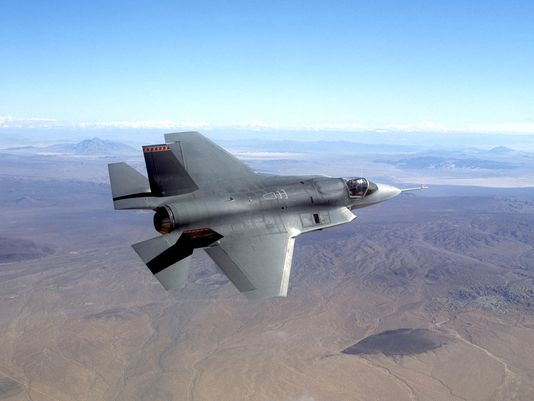 Designs for many of the nation’s most sensitive advanced weapons systems have been compromised by Chinese hackers, according to a report prepared for the Pentagon and to officials from government and the defense industry.Among more than two dozen major weapons systems whose designs were breached were programs critical to U.S. missile defenses and combat aircraft and ships, according to a previously undisclosed section of a confidential report prepared for Pentagon leaders by the Defense Science Board.

Experts warn that the electronic intrusions gave China access to advanced technology that could accelerate the development of its weapons systems and weaken the U.S. military advantage in a future conflict.

The Defense Science Board, a senior advisory group made up of government and civilian experts, did not accuse the Chinese of stealing the designs. But senior military and industry officials with knowledge of the breaches said the vast majority were part of a widening Chinese campaign of espionage against U.S. defense contractors and government agencies.

The significance and extent of the targets help explain why the Obama administration has escalated its warnings to the Chinese government to stop what Washington sees as rampant cyber­theft.

In January, the advisory panel warned in the public version of its report that the Pentagon is unprepared to counter a full-scale cyber-conflict. The list of compromised weapons designs is contained in a confidential version, and it was provided to The Washington Post.

Some of the weapons form the backbone of the Pentagon’s regional missile defense for Asia, Europe and the Persian Gulf. The designs included those for the advanced Patriot missile system, known as PAC-3; an Army system for shooting down ballistic missiles, known as the Terminal High Altitude Area Defense, or THAAD; and the Navy’s Aegis ballistic-missile defense system.

Also identified in the report are vital combat aircraft and ships, including the F/A-18 fighter jet, the V-22 Osprey, the Black Hawk helicopter and the Navy’s new Littoral Combat Ship, which is designed to patrol waters close to shore.

Also on the list is the most expensive weapons system ever built — the F-35 Joint Strike Fighter, which is on track to cost about $1.4 trillion. The 2007 hack of that project was reported previously.

China, which is pursuing a comprehensive long-term strategy to modernize its military, is investing in ways to overcome the U.S. military advantage — and cyber-espionage is seen as a key tool in that effort, the Pentagon noted this month in a report to Congress on China. For the first time, the Pentagon specifically named the Chinese government and military as the culprit behind intrusions into government and other computer systems.

As the threat from Chinese cyber-espionage has grown, the administration has become more public with its concerns. In a speech in March, Thomas Donilon, the national security adviser to President Obama, urged China to control its cyber-activity. In its public criticism, the administration has avoided identifying the specific targets of hacking.

But U.S. officials said several examples were raised privately with senior Chinese government representatives in a four-hour meeting a year ago. The officials, who spoke on the condition of anonymity to describe a closed meeting, said senior U.S. defense and diplomatic officials presented the Chinese with case studies detailing the evidence of major intrusions into U.S. companies, including defense contractors.In addition, a recent classified National Intelligence Estimate on economic cyber-espionage concluded that China was by far the most active country in stealing intellectual property from U.S. companies.

The Chinese government insists that it does not conduct ­cyber-espionage on U.S. agencies or companies, and government spokesmen often complain that Beijing is a victim of U.S. cyberattacks.

Obama is expected to raise the issue when he meets with Chinese President Xi Jinping next month in California.

A spokesman for the Pentagon declined to discuss the list from the science board’s report. But the spokesman, who was not authorized to speak on the record, said in an e-mail, “The Department of Defense has growing concerns about the global threat to economic and national security from persistent cyber-intrusions aimed at the theft of intellectual property, trade secrets and commercial data, which threatens the competitive edge of U.S. businesses like those in the Defense Industrial Base.”

The confidential list of compromised weapons system designs and technologies represents the clearest look at what the Chinese are suspected of targeting. When the list was read to independent defense experts, they said they were shocked by the extent of the cyber-espionage and the potential for compromising U.S. defenses.

“That’s staggering,” said Mark Stokes, executive director of the Project 2049 Institute, a think tank that focuses on Asia security issues. “These are all very critical weapons systems, critical to our national security. When I hear this in totality, it’s breathtaking.”

The experts said the cybertheft creates three major problems. First, access to advanced U.S. designs gives China an immediate operational edge that could be exploited in a conflict. Second, it accelerates China’s acquisition of advanced military technology and saves billions in development costs. And third, the U.S. designs can be used to benefit China’s own defense industry. There are long-standing suspicions that China’s theft of designs for the F-35 fighter allowed Beijing to develop its version much faster.

“You’ve seen significant improvements in Chinese military capabilities through their willingness to spend, their acquisitions of advanced Russian weapons, and from their cyber-espionage campaign,” said James A. Lewis, a cyber-policy expert at the Center for Strategic and International Studies. “Ten years ago, I used to call the PLA [People’s Liberation Army] the world’s largest open-air military museum. I can’t say that now.”

The public version of the science board report noted that such cyber-espionage and cyber-sabotage could impose “severe consequences for U.S. forces engaged in combat.” Those consequences could include severed communication links critical to the operation of U.S. forces. Data corruption could misdirect U.S. operations. Weapons could fail to operate as intended. Planes, satellites or drones could crash, the report said.

The list did not describe the extent or timing of the penetrations. Nor did it say whether the theft occurred through the computer networks of the U.S. government, defense contractors or subcontractors.

Privately, U.S. officials say that senior Pentagon officials are frustrated by the scale of cybertheft from defense contractors, who routinely handle sensitive classified data. The officials said concerns have been expressed by Gen. Martin Dempsey, chairman of the Joint Chiefs of Staff, and Adm. James A. Winnefeld Jr., the vice chairman, as well as Gen. Keith Alexander, director of the National Security Agency.

“In many cases, they don’t know they’ve been hacked until the FBI comes knocking on their door,” said a senior military official who was not authorized to speak on the record. “This is billions of dollars of combat advantage for China. They’ve just saved themselves 25 years of research and development. It’s nuts.”

In an attempt to combat the problem, the Pentagon launched a pilot program two years ago to help the defense industry shore up its computer defenses, allowing the companies to use classified threat data from the National Security Agency to screen their networks for malware. The Chinese began to focus on subcontractors, and now the government is in the process of expanding the sharing of threat data to more defense contractors and other industries.

An effort to change defense contracting rules to require companies to secure their networks or risk losing Pentagon business stalled last year. But the 2013 Defense Authorization Act has a provision that requires defense contractors holding classified clearances to report intrusions into their networks and allow access to government investigators to analyze the breach.

The systems on the science board’s list are built by a variety of top defense contractors, including Boeing, Lockheed Martin, Raytheon and Northrop Grumman. None of the companies would comment about whether their systems have been breached.

But Northrop Grumman spokes­man Randy Belote acknowledged the company “is experiencing greater numbers of attempts to penetrate its computer networks” and said the firm is “vigilant” about protecting its networks.

A Lockheed Martin official said the firm is “spending more time helping deal with attacks on the supply chain” of partners, subcontractors and suppliers than dealing with attacks directly against the company. “For now, our defenses are strong enough to counter the threat, and many attackers know that, so they go after suppliers. But of course they are always trying to develop new ways to attack.”

The Defense Science Board report also listed broad technologies that have been compromised, such as drone video systems, nanotechnology, tactical data links and electronic warfare systems — all areas where the Pentagon and Chinese military are investing heavily.

“Put all that together — the design compromises and the technology theft — and it’s pretty significant,” Stokes said.