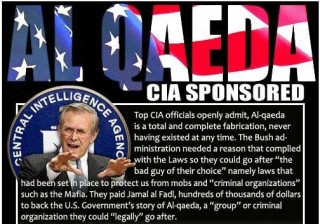 CIA fingerprints are all over the Boston Marathon bombings.In this article, Jerry Mazza notes that the likely perpetrator of the bombings – Craft International – is a CIA spin-off. The  patsies‘ Uncle Tsarny is part of the “family” of rogue CIA spook Graham Fuller. And the patsies were set up with the help of another rogue CIA spin-off – the Mujahedin-e-Khalq (MEK), which uses American tax dollars to murder innocent civilians by the thousands in Iran.

This shouldn’t be surprising. After all, the “radical Muslim terrorists” in Chechnya are heavily supported by the CIA; their job is to attack Russia, not the US. The whole idea of a “self-radicalized Chechen” attacking the US is preposterous.

Bottom line: It looks like the CIA is split by the same “bifurcated command structure” that afflicts the US military.

The making of mayhem

First, you find two or more young, disgruntled immigrants and/or U.S. citizens, preferably from countries that have been violated by the U.S. or another superpower, like Russia. They might have been taken to the U.S. by parents who were refugees, looking for asylum from some part of the world like Chechnya, split by civil war, brutal repression of the larger power, seeming to breed terrorists who had already been creating attacks against civilians, including schools, movie theaters, public events, within that larger power.

Two of these young immigrants were the Tsarnaev Brothers, Tamerlan, the elder, 26, and Dzhokhar, 19, the younger. A third immigrant was the bellicose Uncle Tsarny, who changed his name from Tsarnaev to Tsarny to distance himself from the family. In this case, the two, would-be Chechan guerillas were supported by a terrorist organization called MEK (People’s Mujahedin-e-Khalq), which was also was supported by the CIA. Take note.

Now, mix in the national intelligence agency of a rival country to that larger, more powerful one that was willing to provide support to terrorists that were attacking it, and add our “Brothers” and their bellicose Uncle Tsarny, who coincidentally had been married to the daughter (Samantha Fuller) of a top member of the CIA, Graham Fuller. Fuller had a substantial history of active participation in that agency’s major clandestine operations. Is anyone suspicious about the connections between the brothers, Uncle Tsarni, and the CIA so far?

The real Chechen ‘terrorists,’ it turns out, were useful to the U.S. in keeping the heat up on the Russians, just as the Afghan mujahedeen was used in the anti-Soviet war in Afghanistan, from 1980 to 1989, to sap Russia’s military strength and financial resources. Chechnya even drew neocons who signed up as Chechnya’s ‘friends,’ including former CIA Director James Woolsey. The acting principle is “the enemy of my enemy is my friend.”

In fact, Uncle Ruslan Tsarny while married to Fuller’s daughter, ran a strange organization called the Congress of Chechen International Organizations, which, even more strangely, used as its address Fuller’s home in Rockville, MD, a DC suburb. (The CCIO was said to provide charity aid to Chechnya, though the real substance of that “aid” was most likely something else).

Uncle Tsarni described in the organization’s registration document for Maryland its purpose in very general and uninformative terms, such as “ordinary business.” It seems Ruslan Tsarni also, during the 1990s was a consultant in Kazakhstan, one more former Soviet republic, for US AID (Agency for International Development), an organization which has often provided cover for CIA operatives. Not surprisingly, the Maryland company registration for Ruslan Tsarni’s ‘company’ was located at the CIA heavyweight Graham Fuller’s home.

The coincidences put the two Tsarnaev brothers at two degrees of separation from the CIA Graham Fuller’s household, which should have raised some eyebrows about links between the Brothers and the Agency.

This made the Boston bombing a nasty bit of blowback, which should have inspired someone to look for some US effort to recruit Tamerlan, the older brother to work against Russia. This effort could have backfired, though, if he turned against his U.S. “handlers” for some reason, like the anti-immigrant policy of the “Golden Gloves” boxing organization, which quickly changed its rules about letting legal immigrants take part in the boxing contest, preventing him for a second shot at the national title, or the US Citizenship and Immigration Services that blocked his efforts to gain citizenship, due to an arrest (but no conviction) for once (allegedly) slapping his girlfriend.

It would be very interesting to know what if any contacts took place between either of the Tsarnaev brothers with the CIA. Coincidentally, there is the bizarre presence at the marathon finish line, before and after the bombing, of men who seem to have been working for the Texas-based mercenary firm, Craft International.

Like Xe (formerly Blackwater), Craft International had a close, let’s say incestuous relationship with the CIA. Such enterprises tend to recruit personnel from the ranks of US and foreign Special Forces’ units, which both have close links to the Agency. Craft International in particular, founded in 2009 by the late US Navy SEAL unit member Chris Kyle is said to have a number of SEAL veterans in its ranks. The CIA has more and more relied on Navy SEALs for covert special operations, most notably the assault in Pakistan on Osama bin Laden’s alleged hideout.

But while the CIA is not supposed take part in cover activities inside the United States, its close relationship with a paramilitary organization like Craft International means the Agency could indirectly do the same thing by relying on a private contractor like Craft, which wouldn’t face the same legal restrictions. For all we know, Craft could be just a dummy CIA front, like Air America during the Vietnam War era. In that respect, Craft International’s address (2101 Cedar Springs Rd., Suite 1400, Dallas, Texas) was listed in Business Week, and is the same address, including Suite 1400, for a handful of businesses, including Cayman Capital Management, LLC, a hedge fund firm headed by a J. Kyle Bass; Japan Macro Opportunities Off-Shore Partners, a Cayman Islands-incorporated firm; a Bruce Davis, listed as “registered agent” for a firm called Solidus Bancshares, In.; and HW GP LLC (business not clear) that suggests a “drop box” kind of office rather than a functional business operation. That would point to a dummy corporation or front company.

There’s no official information to suggest that the CIA had anything to do with the Boston bombing. But the same thing can’t be said about Craft International. For instance, the marathon bombing photos present some troubling evidence, showing disturbing similarities between markings on an exploded backpack, which the FBI says contained one of two pressure-cooker bombs, and the backpacks being worn by the Craft International personnel photographed at the marathon finish line.

Did police look into these potential connections, or at the link between the Tsarnaev brothers and their CIA-linked Uncle Ruslan, who loudly disowned himself from his relationship with them? A good start would be to check into Ruslan’s actual historical relationship with his two nephews. It’s bizarre how quick he was to denounce them as “losers who had brought shame on all Chechens.” These are the children of his own brother, Anzar Tsarnaev (who is in Dagestan, where he vigorously denies his children’s guilt, calling the events “a set-up,” which they very well might be). Tsarni also claims that it was Tamerlan’s recent turn to Islam which led him to cut himself from his nephew. Yet, their previous relationship is not clear and bears scrutiny.

For its part, the FBI can’t be trusted here, given its long-standing record of setting up “losers” and “naifs.” It’s very possible that at least Tamerlan Tsarnaev was set up by a Bureau provocateur in a plot meant, like so many before it, to be “disrupted” by the FBI (see the first WTC bombing of Tower 1 in 1993, Oklahoma City, Major Nidal Hassan, or Faisal Shahzad, The Car Bomber, etc.). This op spiraled out of control before it could be disrupted, or was taken in a new direction by a second agency. Meanwhile, the Boston Police have been so wrapped up in their illegal “lockdown” of an entire city (better known as Martial law) that it’s unlikely they want to ask probing questions about why this bombing went down. They’re too busy basking in applause from Beantown.

As for Dzhokhar Tsarnaev, he’s already endured a grueling and unconstitutional 16-hour interrogation by the FBI’s crack interrogation team, the so-called High Value Detainee Interrogation Group. It was conducted while he was hospitalized in serious condition, sedated and chained to his bed. His repeated requests for an attorney were blatantly denied. He’s been arraigned for the capital crime of terrorism with a “weapons of mass destruction” for his alleged role in the bombing. Given this, he’s unlikely to tell his “real story.” He and his legal team would probably go for cutting some kind of deal, saying in open court whatever is demanded by prosecutors in order have the death penalty shelved.

So, mayhem once again has been made big-time. But beyond that, why would two smart, talented young men, with no particular gripes against the U.S. or the Americans they lived with most of their lives, have decided to blow up and kill and maim a bunch of mostly young people like themselves in an event that had no real political significance, that is, beyond distracting the corporate media from any dire issues taking place around the world (and there are many of them: for example, Syria recently attacked by Israel three times), which threatens the entire region’s stability.

Yet, there are “leaked reports” that Dzhokhar during his FBI mind-scrubbing said he and his brother were “Angry with the US about the Iraq and Afghan wars.” Funny, there were no prior histories of the brothers having a problem with them, or attending anti-war protests in liberal Boston or with Occupy actions going on there. If anything, Tamerlan, supposedly the dominant figure of the two, had seemingly focused on the suffering of his native Chechnans and fellow Muslims in Russia, which would make an attack on the US a turn in the road.

More likely, looking for links from Uncle Tarny to the CIA would be helpful. Also, a good look at the presence of the Craft International personnel at the marathon finish line, particularly the uncanny similarity in attire between them and Tamerlan Tsarnaev, should make eyes open. Then, too, an answer to the questions of where the two brothers, neither of whom had obvious access to wealth, got the money to spend on fancy clothes or, in the case of Tamerlan, who with his wife and small daughter, on the basis of his publicly available information, qualified, until this year, for welfare assistance. This while owning a late model Mercedes-Benz sedan. Call in the sleuths. The clowns are here.

Thus, this latest making of mayhem, calls for our attention because our ever-increasing, security-obsessed government has been using each incident to further curtail our freedoms. We have to pay attention more because none of this is being investigated, or even reported at all by corporate media, which seem to be happy just rewriting “official statements” and “leaks” and calling it journalism.