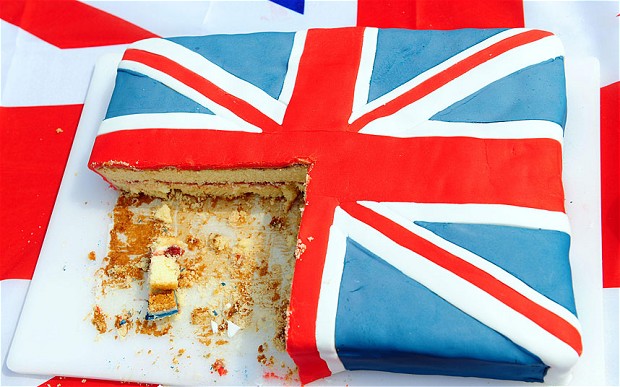 Fitch joined Moody’s in downgrading the UK to AA+ “to reflect a weaker economic and fiscal outlook” that has caused both the budget deficit and national debt to soar above earlier forecasts.

It means that only Standard & Poor’s has the UK on the top rating, albeit on “negative outlook”.

The downgrade was blamed on “the weak growth performance of the UK economy in recent years, partly due to private and public sector deleveraging and the eurozone crisis”.

It will come as another damaging blow to the Chancellor, who has already been under pressure from the International Monetary Fund this week to kick start growth by easing up on austerity.

However, Fitch said its decision to place the UK on a “stable” outlook “assumes a continued policy commitment to reducing the underlying budget deficit”.

And, in words that appeared to contradict the IMF, it argued that the UK lost its top rating because there was no “fiscal space to absorb further adverse economic and financial shocks”.

Speaking in Washington, George Osborne hinted he would reject a likely demand from the IMF next month to fundamentally alter his £130bn austerity programme.

Asked if he would follow a different IMF plan, he said: “It depends whether you agree with that advice.”

Defending his current strategy and risking a fight with the Fund, he added: “What the IMF has asked us to do is to show flexibility and credibility. The Autumn Statement and Budget demonstrated that by not chasing the debt target and taking additional measure to support the economy.”

He was also dismissive of IMF chief economist Olivier Blanchard’s claim that the UK was “playing with fire”, saying he was “just one voice” at the IMF. He added that the IMF has recommended countries reduce their deficit at a rate of 1pc a year and “we are bang on that”.

Fitch cut its UK growth forecast for this year from 1.5pc to 0.8pc and for next year from 2pc to 1.8pc. “The UK economy is not expected to reach its 2007 level of real GDP until 2014, underscoring the weakness of the economic recovery,” it added.

“Weak economic performance and growth prospects, relatively high levels of private and foreign as well as public debt, along with sizeable twin fiscal and current account deficits, are weaknesses relative to rating peers,” it said.

A Treasury spokesman said: “This is a stark reminder that the UK cannot simply run away from its problems, or refuse to deal with a legacy of debt built up over a decade. Though it is taking time, we are fixing this country’s economic problems.”