One of the more curious revelations of the New Normal is the fundamental dichotomy when investing between paper “investors”, or those who chase returns based on intangible, fiat-based and central bank-backed promises, such as capital appreciation or cash flow streams, and those who would rather convert their paper money into hard assets, even if said assets can not be, in the immortal words of Warren Buffett, fondled, or otherwise generate a cash-based return. Such as gold.Today provides perhaps the perfect example of how the former increasingly trade on nothing but momentum and speculative mania (such as the previously reported record inflow of foreign capital into the Japanese stock market well after the bulk of the easy upside has already been made and at this point there is mostly downside) and where buying begets only more buying, while rampant selling only leads to liquidations, while those who invest in hard assets (and thus have little to no leverage) have become the true value investors, purchasing more as the price of the underlying asset drops. Yes, a novel concept to most High Frequency Trading vacuum tubes, and the momentum-chasing, equity trading “expert” du jour, but nothing new to Indians, Australians, Chinese or the Japanese.

And apparently to at least some Americans.

According to today’s data from the US Mint, a record 63,500 ounces, or a whopping 2 tons, of gold were reported sold on April 17th alone, bringing the total sales for the month to a whopping 147,000 ounces or more than the previous two months combined with just half of the month gone.

Punchline number one, as the chart below shows, is that the more the price of gold fell, the more aggressive the purchases of physical gold through the Mint became, rising to 96,500 oz in the last two days alone. Buying more of something you want when the price drops: what a stunning concept – explain that to the algos who nearly crashed the German stock market overnight.

Punchline number two, of course, is that the US mint charges a hefty premium for purchases: much more so than traditional vendors like Apmex or Gainesville Coins, and is usually the last resort for when nobody else has any physical at a lower premium to spot (or any metal in inventory). 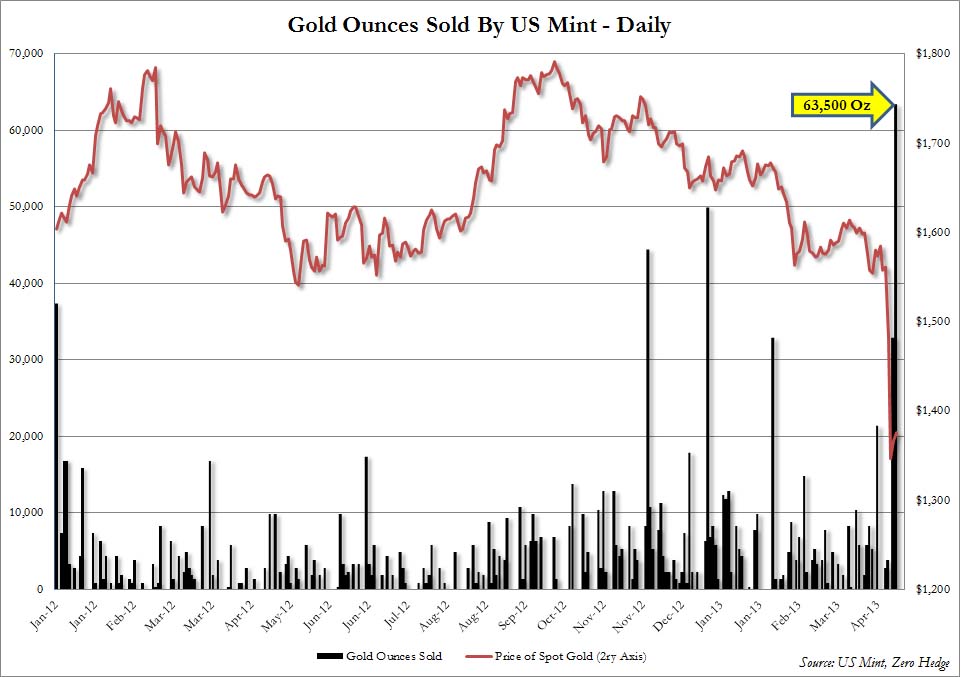 So how long until the US mint “runs out” of American Eagles and Buffaloes in inventory, along with the depletion of all other precious metal vendors? And what happens if the price of paper gold hits zero (or goes negative) courtesy of bank and financial institution liquidation selling of paper derivative contracts nebulously referencing some yellow metal somewhere, even as suddenly there is no physical to be delivered to anyone, anywhere?