It’s now becoming clear that members of the Boston bomb squad had advanced notice of the horrific bombing that took place at the marathon today. As an eyewitness reports, once the bombs went off, officials began announcing, “this is just a drill!” This logically means they were all informed of the “bomb drill” beforehand. Otherwise, why would they respond with, “this is just a drill” ?

According to Local15TV.com, a University of Mobile’s Cross Country Coach said there were bomb-sniffing dogs at both the start and finish lines, long before any explosions went off. He said:

The official story of the bombing is that terrorists detonated two bombs at the marathon finish line and that the Boston bomb squad magically located a third bomb one mile away, identified the bomb, rigged it with explosives and initiated a “controlled explosion” all in less than an hour! (Absurd.)

The official story sounds like nothing more than a cover story.

Here are some of the facts we know so far

1) Bomb-sniffing dogs were present at the start of the race and the finish line, even before bombs went off.

2) The reported arrest of a “Saudi national” has now been retracted. Apparently that was a mistake published by the NY Post.

3) Instead, the mainstream media is pushing a new narrative that blames “right-wing extremists” for the bombing, even without a shred of evidence to back that up.

4) It is impossible for a bomb squad to have located, analyzed, rigged and detonated the third bomb in under an hour, especially when it was located one mile away, at the Kennedy Presidential Library.

See the map, below: 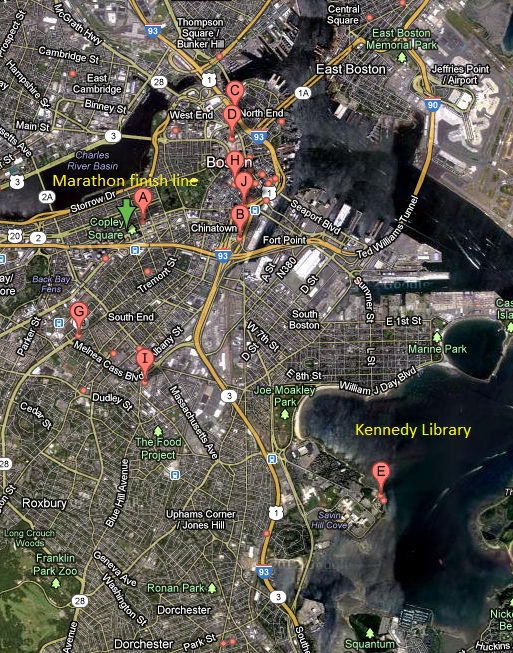 Why did the Boston bomb squad know all this in advance?

Given these facts, ask yourself: Who is the most likely culprit in the bombing?

There are two reasonable explanations for this:

1) Someone called in a warning and threatened to bomb the event, which is why the bomb squad was on scene.

2) The bomb squad carried out the bombing as a false flag operation to achieve a political goal (unleashing TSA on the streets, blaming right wingers, increasing the bomb squad budget, etc.).

For explanation number one: If a credible threat had been called in, why didn’t the Boston police cancel the marathon or try to warn runners about the security threat? Is it their policy to allow people to jog right into a massacre they’ve already been warned about?

For the second explanation, there are all sorts of reasons why the Boston bomb squad might have placed the bombs at the marathon. It could have been a drill that went terribly wrong (i.e. no explosions were planned but they accidentally went off), or it could have been a deliberate attempt to terrorize the American people and justify armed TSA agents on the streets for all future sporting events.

Although it’s still a bit early to know for certain, this looks more and more like a planned event that was deployed by the Boston bomb squad, called a “drill,” then used as a pretext for the President to call for TSA agents to be on the streets at all future sporting events.

And that, in turn, is the run-up to the TSA occupation of America, which has always been the goal of Obama. Remember that back on the campaign trail, he announced he wanted to build a “civilian national security force.”

Click here to watch the video where Obama says:

The fastest way to build a domestic national security force is to stage domestic bombings as a pretext. More and more, that seems to be what unfolded today in Boston.

Remember, too, that DHS has now purchased over 2 billion rounds of ammunition to be used domestically, against the American people. (The number was 1.6 but has now been upgraded to over 2 billion.)

The real proof is in what happens next

Regardless of what you might think is behind this right now, the real proof will be found in what Obama calls for in response to the bombings.

If he calls for TSA on the streets of America to “keep everybody safe” at sporting events, then it’s all clearly a false flag rolled out for a political purpose. It was all a pretext to justify a TSA lockdown.

If the bombing is used to frame and blame veterans, patriots or “right-wing extremists,” then it’s clearly a false flag, too. Veterans and patriots have been severely demonized by the Obama administration as well as the leftist media.

If the administration avoids using the bombings to roll out its political agenda, then it might have legitimately been a random terrorist attack by a deranged individual. We’ll have to wait and see what Obama calls for in reaction to the attacks in order to know their true political purpose.

4 thoughts on “Boston Marathon Bombing Official Story Unravels – Why Did The Boston Bomb Squad Had All This Advance Knowledge?”