According to some economist PhDs, the end of the gold standard era marked by the arrival of the Federal Reserve one century ago ushered in the era of stability, prosperity and virtually unlimited growth (just ignore the two world wars and millions of casualties immediately following). While that is an amusing way of describing a financial system that is now daily on the brink of a financial apocalypse courtesy of a few good central banks propping up a $1 quadrillion house of derivatives cards, whose collapse would mean an immediate “game over”, and where (rapidly evaporating) confidence in a failing status quo, must be preserved at all costs, the question of post-Fed induced stability is an interesting one, especially when measured in terms of intangible value (in this case the most basic of indicators – the Dow Jones), compared to thousands of years of a real tangible, store of wealth: gold. In the chart below, courtesy of Cambridge House, we ask readers: in which period was there a more stable relationship between tangible and intangible values, and a less exuberant irrationality vis-a-vis that which is purely based on confidence, if not so much reality. 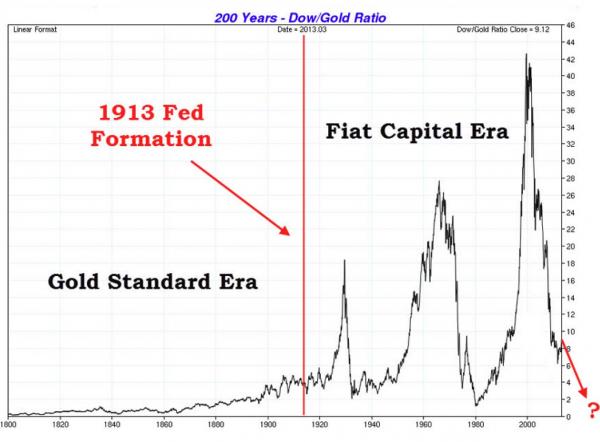 A second logical follow up question is: where is this ratio of intangible to tangible value going next? The chart below attempts to provide some log-based perspective on precisely this. 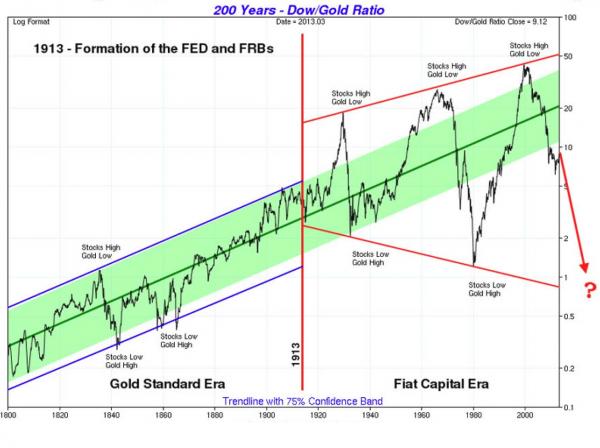