In the past week much has been written about the emerging distinction between the Cypriot Euro and the currency of the Eurozone proper, even though the two are (or were) identical. The argument goes that all €’s are equal, but those that are found elsewhere than on the doomed island in the eastern Mediterranean are more equal than the Cypriot euros, or something along those lines. This of course, while superficially right, is woefully inaccurate as it misses the core of the problem, which is a distinction between electronic currency and hard, tangible banknotes. Which is why the capital controls imposed in Cyprus do little to limit the distribution and dissemination of electronic payments within the confines of the island (when it comes to payments leaving the island to other jurisdictions it is a different matter entirely), and are focused exclusively at limiting the procurement and allowance of paper banknotes in the hands of Cypriots (hence the limits on ATM and bank branch withdrawals, as well as the hard limit on currency exiting the island).

In other words, what the Cyprus fiasco should have taught those lucky enough to be in a net equity position vis-a-vis wealth (i.e., have cash savings greater than debts) is that suddenly a €100 banknote is worth far more than €100 in the bank, especially if the €100 is over the insured €100,000 limit, and especially in a time of ZIRP when said €100 collects no interest but is certainly an impairable liability if and when the bank goes tits up.

Said otherwise, there is now a very distinct premium to the value of hard cash over electronic cash.

And while this is true for Euros, it is just as true for US Dollars, Mexican Pesos, Iranial Rials and all other currencies in a fiat regime.

Which brings us to the crux of the issue, namely fractional reserve banking, or a system in which one currency unit in hard fiat currency can be redeposited with the bank that created it (as a reminder in a fiat system currency is created at the commercial bank level: as the Fed itself has made quite clear, “The actual process of money creation takes place primarily in banks”) to be lent out and re-re-deposited an (un)limited number of times, until there is a literal pyramid of liabilities and obligations lying on top of every dollar, euro, or whatever other currency, is in circulation. The issue is that the bulk of such obligations are electronic, and in its purest form, a bank run such as that seen in Cyprus, and preempted with the imposition of the first capital controls in the history of the Eurozone, seeks to convert electronic deposits into hard currency.

Alas, as the very name “fractional reserve banking” implies, there is a very big problem with this, and is why every bank run ultimately would end in absolute disaster and the collapse of a fiat regime, hyperinflation, and systemic bank and sovereign defaults, war, and other unpleasantries, if not halted while in process.

One look at the chart below should be sufficient to explain this rather problematic issue of a broken banking system in which trust is evaporating faster than Ice Cubes in the circle of hell reserved for economist PhD’s. 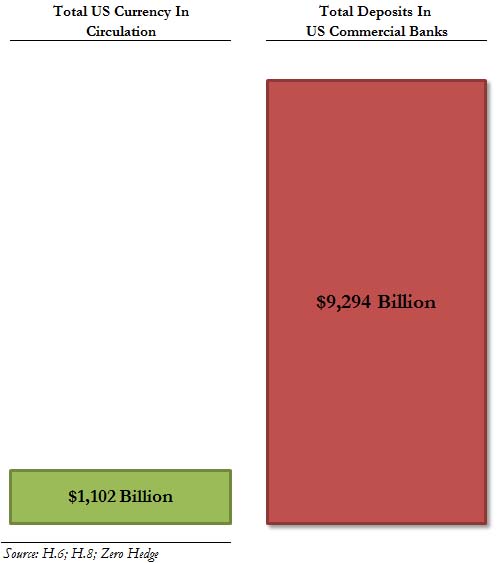 Which means that if (and we are not saying it will) a Cyprus-style fiasco were to occur in the US, and those $9.3 trillion in total deposits seek to obtain
“physical representation” in the form of actual currency (i.e., a systemic bank run), just as all those lining up in front of Cypriot ATMs are desperate to do each and every day when they have a €300 limit on physical cash withdrawals, there will be a roughly 88% haircut for every single dollar that US savers believe is “safe” in the bank.

Of course, this entire example is only applicable within the confines of the fiat monetary system, assuming there are no other currency equivalents, such as precious metals, hard assets, or even virtual electronic currencies. But naturally to the broken monetary system, which relies on nothing but faith, trust and, hence, credit, even the thought of an alternative to a regime in which the breakdown of trust results in a 90% (at least) haircut of accumulated wealth, is pure heresy.

Which is why the deeper the rabbit hole goes, and the more countries are Cyprus’ed, the greater the onslaught and attack against gold, silver, and other traditional and historic fallback currencies to what is increasingly pejoratively known simply as “paper.“