– How Iceland Overthrew The Banks: The Only 3 Minutes Of Any Worth From Davos (Video)

– Iceland’s Economy Now Growing Faster Than The U.S. And EU After Arresting The Banksters

– A Lesson For Europe: Why Iceland Won’t Join The Euro (Video)

Just last week Yiannakis Omirou, Cypriot House of Representatives President, was calling for the nation to accept it is “time for responsibility” as they progressed towards a final solution; and yet today, as Cyprus’ Famagusta reports, he believes the ‘Troika-imposed’ responsibility will, “turn Cyprus into a colony of the worst possible type.” His ‘Icelandic’ solution is to “leave the Troika and EMS behind,” to ensure “national independence, national sovereignty, moral integrity, and economic independence.” He may have a point; judging from the chart below of the Troika’s poster-child Greece, relative to Iceland, things are not going so well. As Omirou ominously concludes, “if we remain bound by the Troika and the memorandum Cyprus’ destiny is already foretold and there will be no future.” 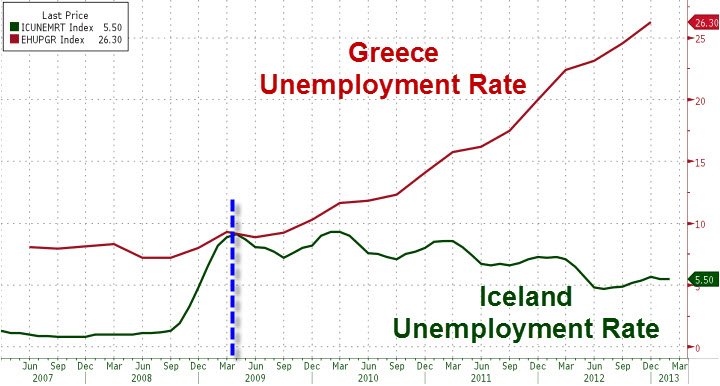 There is no other alternative but to free Cyprus from the bonds of the troika and the memorandum, House of Representatives President Yiannakis Omirou has said.

Omirou also expressed his conviction that no Attorney General would dream of not following through with the results of an investigation led by an independent committee to apportion blame on those responsible for bringing the country’s economy and banking sector near collapse.

Omirou talked about the troika demands, which according to him will multiply and will turn Cyprus to a colony of the worst possible type and warned “I would like to send a message to the Cyprus people that there is no other way, there is no alternative apart from freeing (the country) from the troika’s and the memorandum’s bonds”.

He noted that certainly, “this road will demand sacrifices”, adding that “by leaving the troika and the EMS behind us, we will ensure our national independence, our national sovereignty, our moral integrity and our economic independence”.

“If we remain bound by the Troika and the memorandum Cyprus’ destiny is already foretold and there will be no future”, he pointed out.