(In case you have difficulty believing this, here is the related Wall Street Journal article.)

I told you to invest in physical gold and silver (and most important, to keep it outside the banking system).

All the sheeple who still believe in their fiat currencies will get herded, milked, fleeced and slaughtered (at least financially).

There will be very high rates of inflation in Europe and the U.S. and a currency reform where the sheeple will lose at least  50% through devaluation is just around the corner.

So THIS is just the beginning and another (last) warning.

And if you have a problem with your government stealing your money and resist, then you’re going to feel the batons of your not so local riot police squad.

Those (brainwashed) police officers will also get completely fleeced, BUT they have a very secure (and  highly dangerous) job in the coming years to support their family.

Got PHYSICAL GOLD AND SILVER?

Europe has done it again. 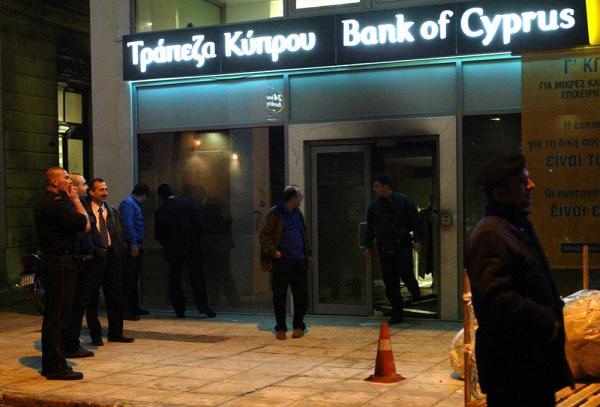 Late last night, after markets closed for the weekend, following an extended discussion the European finance ministers announced their “bailout” solution for Russian oligarch depositor-haven Cyprus: a €13 billion bailout (Europe’s fifth) with a huge twist: the implementation of what has been the biggest taboo in European bailouts to date – the  impairment of depositors, and a fresh, full blown escalation in the status quo’s war against savers everywhere.

Specifically, Cyprus will impose a levy of 6.75% on deposits of less than €100,000 – the ceiling for European Union account insurance, which is now effectively gone following this case study – and 9.9% above that. The measures will raise €5.8 billion, Dutch Finance Minister Jeroen Dijsselbloem, who leads the group of euro-area ministers, said.

But it doesn’t stop there: a partial “bail-in” of junior bondholders is also possible, as for the first time ever the entire liability structure of a European bank – even if it is a Cypriot bank – is open season for impairments. The logical question: why here, and why now? And what happens when the Cypriot bank run that has taken the country by storm this morning spreads everywhere else, now that the scab over Europe’s biggest festering wound is torn throughout the periphery as all the other PIIGS realize they too are expendable on the altar of mollifying voters and investors in the other countries that make up Europe’s disunion.

Bloomberg’s take on the sacrifice of Cyprus’ savers:

Officials have struggled to find an agreement that would rescue Cyprus, which accounts for just half of a percent of the euro region’s economy, without unsettling investors in larger countries and sparking a new round of market contagion. Policy makers began meeting at 5 p.m. yesterday in a hastily convened gathering, seeking to overcome differences on bondholder losses while financial markets were closed.

“Further measures concern the increase of the withholding tax on capital income, a restructuring and recapitalisation of banks, an increase of the statutory corporate income tax rate and a bail-in of junior bondholders,” according to a communique released by ministers after the talks. It didn’t specify whether bank or sovereign bond holders could be affected.

The European Central Bank will use its existing facilities to make funds available to Cypriot banks as needed to counter potential bank runs. Depositors will receive bank equity as compensation.

Finance Minister Michael Sarris said the plan was the “least onerous” of the options Cyprus faced to stay afloat.

“It’s not a pleasant outcome, especially of course for the people involved,” said Sarris. The Cypriot parliament will convene tomorrow to vote on legislation needed for the bailout.

Needless to say, the locals are delighted:

In the coastal town of Larnaca, where irate depositors queued early to withdraw money from cash machines, co-op credit societies that are normally open on Saturdays stayed closed.

“I’m extremely angry. I worked years and years to get it together and now I am losing it on the say-so of the Dutch and the Germans,” said British-Cypriot Andy Georgiou, 54, who returned to Cyprus in mid-2012 with his savings.

“They call Sicily the island of the mafia. It’s not Sicily, it’s Cyprus. This is theft, pure and simple,” said a pensioner.

For the real response, look to Russia:

The island’s bailout had repeatedly been delayed amid concerns from other EU states that its close business relations with Russia, and a banking system flush with Russian cash, made it a conduit for money-laundering.

“My understanding is that the Russian government is ready to make a contribution with an extension of the loan and a reduction of the interest rate,” said the EU’s top economic official, Olli Rehn.

Almost half of [Cyprus’] depositors are believed to be non-resident Russians, but most of those queuing on Saturday at automatic teller machines to pull out cash appeared to be Cypriots.

While “saving”, pardon the pun, yet another insolvent country merely has the intent of keeping it in the Eurozone, and thus preserving Europe’s doomed monetary block and bank equity for a little longer, this idiotic plan will achieve two things: i) infuriate not just Russians but very wealthy, and very trigger-happy Russians. The revenge of Gazpromia will be short and swift, and we certainly would not want to be Europeans next winter when the average heating level of Western European will depend on the whims of Russian natural gas pipeline traffic; ii) start a wave of bank runs first in Cyprus and soon everywhere else that has the potential of being the next Cyrpus.

While the tax on deposits will hurt wealthy Russians with money in Cypriot banks, it will also sting ordinary citizens. Some ATMs in the country have run out of cash, Erotokritos Chlorakiotis, general manager of the Cooperative Central Bank, told state-run CYBC.

Funds to pay the levy were frozen in accounts immediately, ECB Executive Board Member Joerg Asmussen said. The levy will be assessed before Cypriot banks reopen on March 19 after a March 18 national holiday. Sarris said electronic transfers will also be limited until then.

Curiously, even everyone’s favorite liar, former Eurogroup president, Jean-Claude Juncker, has a warning that this “bailout” is the worst thing Europe could have done:

Skeptics including Luxembourg’s Jean-Claude Juncker had said that imposing investor losses in Cyprus risked reigniting the financial crisis that has so far pushed five of the euro zone’s 17 members to seek aid. Last year, the euro area took what officials called a unique step to ask Greek bondholders to absorb losses.

But fear not: Europe has promised this absolute resolution taboo won’t repeat itself…

When asked if a deposit assessment could be ruled out for future rescues, Rehn said in an interview: “It can and there is no concrete case where it should be considered.”

… Until it does repeat itself of course – after all the fundamental problem for Europe has never been resolved: the continent is still broke, and it still is running out of good, unencumbered assets (which as being repledged by the banking oligarchy) with every passing day.

Now the only thing unknown is Russia’s response:

Corporate tax rates in Cyprus will rise to 12.5 percent to 10 percent as part of the deal, Dijsselbloem said. Rehn told reporters that Russia, whose banks have loaned as much as $40 billion to Cypriot companies of Russian origin, would ease terms on its existing loans to Cyprus as the rescue unfolds. Cyprus’s finance minister is scheduled to fly to Moscow on March 20.

What is known, however is that Cypriots have taken the news in stride…. and to their local ATM machine, which sadly is showing the following message: “We apologize. We are facing difficulties” (courtesy of Yannis Mouzakis). 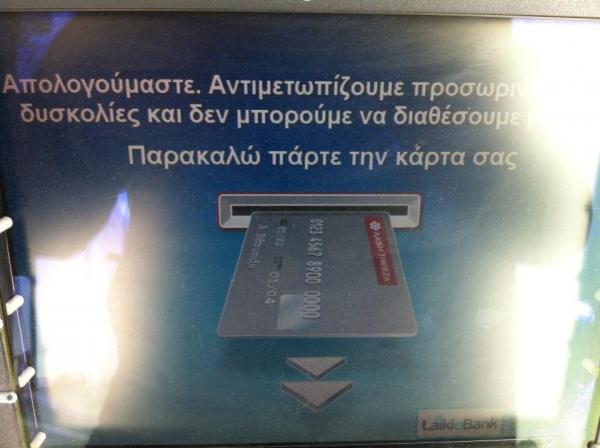 It didn’t take long before the Cyrpus Cooperative bank issued a statement saying “some ATMs run out of cash” – by some they likely mean all as the entire country is now gripped in a full force depositor run.

Some other snapshots of what is currently happening in Cyrpus, where locals are using excavators if not to force the ATMs into “compliance” then to block bank entrances out of blind fury. From Philenews:

Indignant citizen who has the testimony of the Cooperative Credit Society Kyperoundas, cut the morning the entrance of the branch of the SEA, located on Avenue Nikos and Despina Pattichi in Limassol.

He said he believes that deceived by the assurances that the relevant deposits are insured citizens and decided how to express his protest, parking the excavator outside the entrance of the branch of SEA 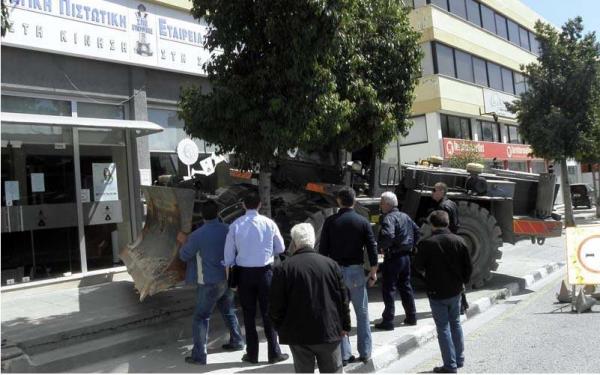 With the first light of day after the unprecedented decision to the Eurogroup on the terms of the Memorandum of Agreement and the taxation of savings, hundreds of people flocked to Cyprus stores credit cooperatives Larnaca to withdraw their deposits.

With the opening of stores found they could not withdraw all their money, because the electronic system of credit cooperatives was not working. And when it became possible, writes the Daily Cyprus, the system seemed to finally hit the appropriate amount of the new tax, which provoked strong reactions. Even after the government ordered the stores eventually closed.

At the same time, according to information or ATMs of banks give no money so that there is a huge inconvenience.

After lunch return to Cyprus President Papadopoulos Nikos Anastasiadis from Brussels in the morning reached political agreement on the rescue of the economy, while in the meantime the Presidential prepares emergency meeting of ministers of the government.

According to all the information, will this weekend be submitted and voted on bills in the form of urgency, before the banks opened Tuesday morning.

In the text of the agreement, with the characteristic title “We caught napping,” the website says Sigma Live Nicosia agreed terms “under threat of closing banks.”  painful Describing the agreement, Sigma relies on sources from Brussels you speak of night thriller and roll jams, and the Cypriot delegation warned even withdrawal from the negotiations.

Congratulations Cyprus savers – you were just betrayed by both your politicians, and by Europe – sorry, but you are the “creeping impairments” in the game known as European bankruptcy. And so is anywhere between 6.75% and 9.9% of your money, which you were foolish enough to keep with your banks (where at least you were compensated with a savings yield of… 0%).

More importantly, as of this morning Europe has finally grasped that there is a 6.75% to 9.9% premium to holding physical cash in your mattress rather than having it stored with your local friendly insolvent bank.

Luckily Cyrpus is so “small” what just happened there will never happen anywhere else: after all in Europe nobody has ever heard of “setting an example”. Or so the thinking among Europe’s unthinking political elite goes.

And congratulations Europe: just when people almost believed you things are “fixed” you go ahead and prove to the world that you are as disunified (because size doesn’t matter in a true union), as confused, as stupid and as broke as ever.