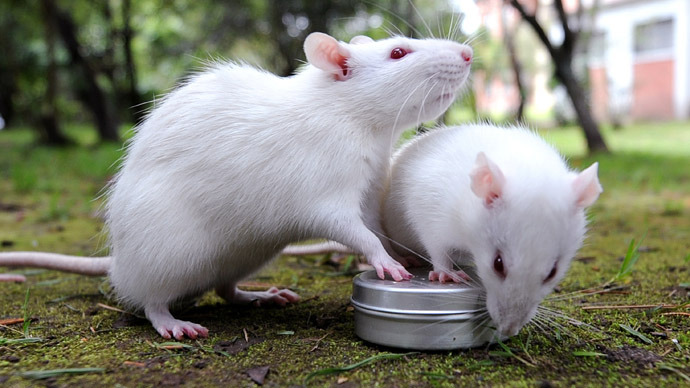 Government mind control may not be as farfetched as it sounds: after 15 years of research, scientists have found a way to transmit information from one brain to another, thereby controlling the thoughts of its test subject.

Scientists have successfully captured the thoughts of a rat in Brazil and electronically transmitted them through the Internet to the brain of a rat in the US. The Brazilian rat had been energetically running around in a lab. When the American rat received the brain waves of its South American counterpart, it immediately began to mimic the behavior – despite the thousands of miles between them, Reuters reports.

Scientists refer to the technique as a “brain link”. The $26 million study of brain-machine interfaces was funded by the Pentagon’s Defense Advanced Research Projects Agency (DARPA), which ultimately hopes to have this technology available to humans.

By linking human brains together, scientists believe they can combine brainpower to solve problems that are too difficult for one person to handle alone, Duke University Medical Center neurobiologist Miguel Nicolelis told Reuters. Nicolelis refers to this link as an “organic computer”, and said scientists will first test it out on monkeys to determine its feasibility.

But not all researchers are excited about the prospect of brain manipulation.

“Having non-human primates communicate brain-to-brain raises all sorts of ethical concerns,” one neuroscientist told Reuters.  “Reading about putting things in animals’ brains and changing what they do, people rightly get nervous.”

This sort of technology raises the concern about the possibility of using humans or animals as soldiers in battle, the scientist added.

While the idea may be unbelievable to some, neurobiologists claim that brain-machine interfaces have actually moved far beyond what is publicly known. Andrew Schwartz, a University of Pittsburgh neurobiologist, says that the experiment with the rats “is of limited interest” considering other advances in the field.

The same team of DARPA-funded researchers have also been able to send rats brain signals that caused them to press a lever a the sight of a red light, distinguish narrow openings from wide ones, and poke water a water port with their nose.

But by granting $26 million to scientists to develop this sort of technology, DARPA is likely expecting the research to be of use to the Pentagon at some point – whether it’s for problem-solving or other uses not yet defined.