When it comes to the creation of money in China, and specifically the asset side of the ledger, or loans, there is much more confusion than consensus, primarily because nobody knows who it is that is creating the money: private or public entities, SOEs, the PBOC, regional banks, shadow banks, or your next door neighbor.Another thing that is largely misreported: what the actual assets pledged as collateral to new loans are. Because while it is well-known that corporate debt in China is now greater as a percentage of GDP than in any other country, the comprehensive picture is still confusing (albeit GMO did a fantastic summary recently of what is known) as reporting standards are still non-existent, and the government flat out lies about its balance sheet.

Yet one very simple shortcut to get a sense of what is truly happening in monetary China is to peek at the liability side of the consolidated balance sheet, and one line in particular, namely deposits. Because unlike in the US, where the vibrant equity Ponzi scheme has rarely been stronger, in China it is still all about the cash and as a result the bulk of the newly created money once again return back to the banking sector in the form of a deposit. Ironically, that is what banking should be about (instead of the entire industry being a glorified hedge fund) although in China even this practice has gone on way too far, and like in Europe, has long passed the point where there is real collateral value backing up the new money created (which explains the emergence of various letters of credit collateralized by copper still not dug out of the ground which reappear every time Chinese inflation spikes above 5%).

So how do deposits look when comparing the US and China? Well, after having less than half the total US deposits back in 2005, China has pumped enough cash into the economy using various public and private conduits to make even Ben Bernanke blush: between January 2005 and January 2013, Chinese bank deposits have soared by a whopping $11 trillion, rising from $4 trillion to $15 trillion! We have no idea what the real Chinese GDP number is but this expansion alone is anywhere between 200 and 300% of the real GDP as it stands now.

By comparison, and as the chart below shows, US deposits have not even doubled over the same time frame instead increasing from $5 trillion to just over $9 trillion. 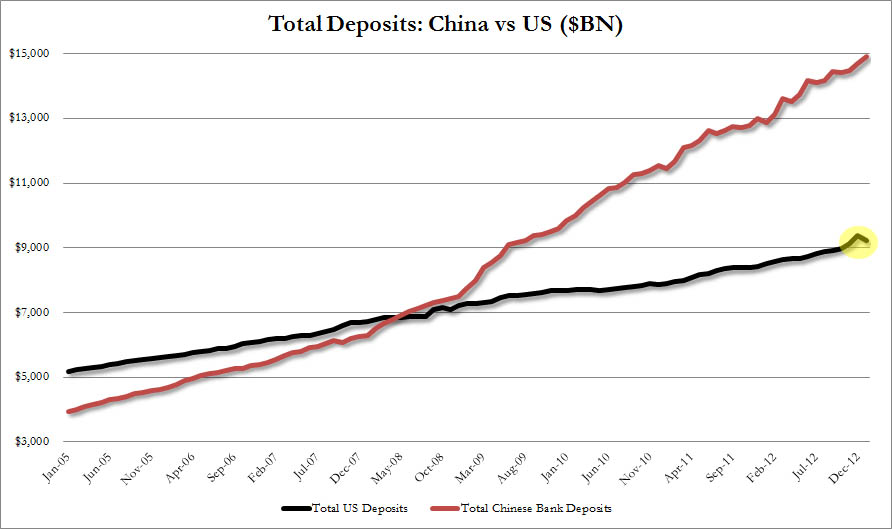 The reason why US deposits have grown relatively slower compared to China is because the bulk of the newly created credit-money has been injected directly into the stock market, whereas in China, where the Shanghai Composite is still mostly a distraction, cash rules.

Incidentally, if one looks at the highlighted tip of the black line, which shows US deposits spiking into year end, then dipping in January, right there is the reason for the rotation into stocks as deposits spiked in December when as we reported many pulled cash out, only to reinvest it in the market while HFT and Bernanke were providing a December stock market floor and avoiding any market drop while retail was selling.

But back to China, and its gargantuan money creation: between January 2012 and January 2013 Chinese deposits rose by just over $2 trillion. In other words, while everyone focuses on Uncle Ben and his measly $1 trillion in base money creation in 2013 (while loan creation at commercial banks continues to decline), China will have created well more than double this amount of money in the current year alone!

It is this blistering injection of cash into the economy why China, of all central banks, has not only eliminated its RRR-cuts, but has made any additional easing a thing of the past. The reason is that China knows that it is this close from setting off another inflationary conflagration, with the help of Bernanke, Draghi, Carney et al of course, just as it did back in 2011. And it will be runaway Chinese inflation, once more like in the spring and summer of 2011, that will be the gating factor on the current bout of monetary injection lunacy that has gripped the developed world’s central bank.

Keep a close eye on Chinese deposits, as more than anything these are the best tell of the inflationary situation in China, and by implication, how close the world’s monetary spigot is to shutting itself off for at least another brief period of time.

And just in case one needs a voice on the ground to simply all of the above, here is China Times with an article explaining just this:

China accounts for nearly half of world’s new money supply

China has seen its money supply surpass that of developed countries since 2009 and has emerged as the world’s biggest “money printing machine.”

Following the global financial crisis of 2008, major economies in the world have been “printing money.” Examples include the quantitative easing measures adopted by the United States and the European Central Bank’s “unlimited” bond-buying program. Most recently, Japan launched its own version of quantitative easing on Jan. 22 by raising its inflation target and announcing open-ended purchases of government bonds.

The amount of newly increased money supply peaked in 2012, totaling over 26 trillion yuan (US$4.1 trillion), with China accounting for nearly half of it.

A jump in China’s consumer price index in December last year had further fueled concerns about the surplus supply of money printed by the central bank and its potential risks. Some analysts played down these concerns, saying that surplus money had become a universal phenomenon and that most of the countries experiencing it could boast a higher per capita income.

According to 2011 data from the World Bank, the global average for surplus ratio was 126%. China ranked number 10 in terms of the countries with the largest surplus ratio. Luxembourg has the highest ratio in the world at 489%. The top 25 also includes Portugal, Italy, Greece and Spain, as well as Germany.

If a country’s per capita income fails to catch up with an increase in its money supply, the ratio will widen, a warning sign for a country’s economy. The European debt crisis is highly correlated with the runaway printing of money by European countries and most importantly, an excessively high ratio of money supply to GDP.

Before a heavily indebted Portugal, Spain and Greece further slipped into the red in 2012, these country’s ratios had surpassed 200% in 2011, among the highest in Europe. While countries including Ireland, Germany, Austria and France also have high ratios of 150%, the high per capita income in these countries has helped relieve a good deal of fiscal strain.

The United States, meanwhile, has one of the lowest ratios in the world. Though the US was largely responsible for the 2008 financial crisis, it has been able to prevent the ratio from increasing.