Up until now, Argentina’s descent into a hyperinflationary basket case, with a crashing currency and loss of outside funding was relatively moderate and controlled. All this is about to change. Today, in a futile attempt to halt inflation, the government of Cristina Kirchner announced a two-month price freeze on supermarket products. The price freeze applies to every product in all of the nation’s largest supermarkets — a group including Walmart, Carrefour, Coto, Jumbo, Disco and other large chains. The companies’ trade group, representing 70 percent of the Argentine supermarket sector, reached the accord with Commerce Secretary Guillermo Moreno, the government’s news agency Telam reported. As AP reports, “The commerce ministry wants consumers to keep receipts and complain to a hotline about any price hikes they see before April 1.”

Perhaps they will. What consumers will certainly do is scramble into local stores to take advantage of artificially-controlled prices knowing very well they have two short months to stock up on perishable goods at today’s prices, before the country’s inflation comes soaring back, only this time many of the local stores will not be around as their profit margins implode and as owners, especially of foreign-based chains, make the prudent decision to get out of Dodge while the getting’s good and before the next steps, including such measures as nationalization, in the escalation into a full out hyperinflationary collapse, are taken by Argentina’s female ruler. 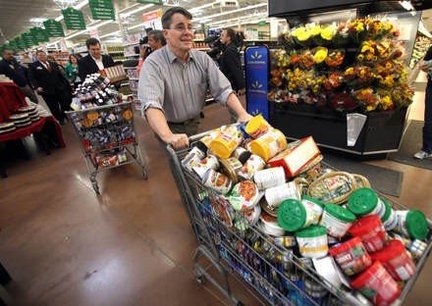 As such expect photos of empty shelves from Buenos Aires to start popping up in a few days, comparable to how threats of a gun and weapon ban by the US government did more for the top and bottom line of US arms dealers than any military conflict ever could.

Economist Soledad Perez Duhalde of the abeceb.com consulting firm predicted on Monday that the price freeze will have only a very short term effect, and noted that similar moves in Argentina had failed to control inflation. Consumers shouldn’t be surprised if the supermarkets are slow to restock their shelves and offer fewer products for sale, she added.

In other news Argentina, just like the rest of the “developed” world, appears to have a slight inflation tracking problem:

Polls show Argentines worry most about inflation, which private economists estimate could reach 30 percent this year. The government says it’s trying to hold the next union wage hikes to 20 percent, a figure that suggests how little anyone believes the official index that pegs annual inflation at just 10 percent.

The BLS has the solution: just exclude any product whose price is rising from your CPI calculation, and voila. For everything else there is a hedonic adjustment.

The ironic comparison to the US does not end there however:

A more effective way to contain inflation would be to “reduce government spending, which is financing an expansion of the money supply, and to have a credible price index.”

Wait, are they still talking about Argentina or the US?

The government announced the price freeze on the first business day after the International Monetary Fund formally censured Argentina for putting out inaccurate economic data. The IMF has given Argentina until September to bring its inflation and economic growth statistics up to international standards. If Argentina doesn’t comply, it could face expulsion from the world body in November.

Well good thing the US complies with the IMF’s stringent “seasonally adjusted” data reporting quality control. Or else, the US may have been expelled from the IMF too. And then who would fund the creeping bailout of Europe (aside from Germany of course)?

The IMF censure “is not just a new error … it’s also a clear example of the organization’s unequal treatment and double standards in regard to certain member countries,” Lorenzino said. “Argentina, just as it agreed with the IMF to do, will keep working to improve its statistical procedures in accordance with good international standards.”

So to summarize: first capital controls, then a currency crisis, then expectations of sovereign default, then a rise in military tensions, and finally – price controls, after which all out chaos usually follows.

Study this sequence well: it is coming to every “developed” country near you in the months and years ahead.

But, as with every other hyperinflationary implosion, there is a silver lining: the stock market is soaring… 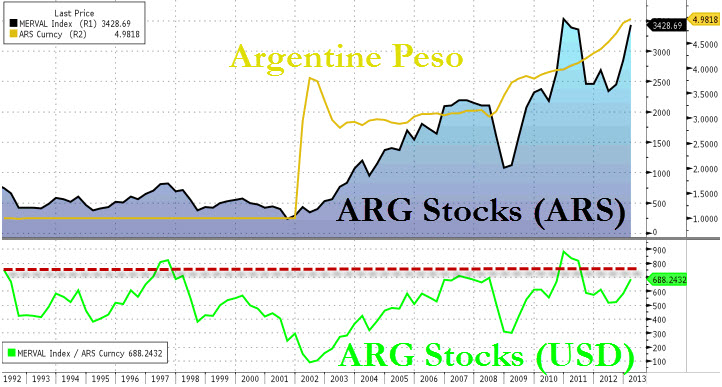 … at least in Peso terms. When priced in USD, the 360% stock market “rise” is more like -9% in the past 21 years. But luckily, the general public has a gene that prevents it from grasping the difference between nominal and real – something Ben Bernanke is very well aware of.