Will the ‘MUPPETS’ ever learn?

In the last few years gold and silver bottomed out around Christmas.

The sheeple buy (soon to be) worthless iPhone’s and iPad’s and the elite buys gold and silver.

It’s around that time of day again – when precious metals are sold hard for whatever reason you care to come up with (collateral requirements, margin calls, alchemy perfected). However, today there is a more mundane reason: Goldman Sachs has suggested its clients sell Gold on the basis that the gold cycle will turn in 2013 thanks to improving US growth offsetting the need for further Fed easing. Of course, Goldman telling its clients to ‘sell gold’ means Goldman is… 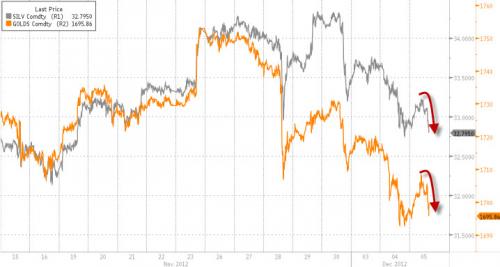 Gold prices range bound in 2012 despite perfect set up

Gold prices have remained range bound in 2012, despite a steady decline in US real rates and rise in central bank holdings that would ordinarily be supportive. To understand this dislocation we expand our modeling of gold prices to include the impact of the US Federal Reserve easing. We find that gold prices “look through” easing that does not require Fed balance sheet expansion –like Operation Twist – increasing instead on announcements of easing through expansion on the Fed’s balance sheet.

Our economists forecast that the US economic recovery will slow early in 2013 before reaccelerating in the second half. They also expect additional expansion of the Fed’s balance sheet. Near term, the combination of more easing and weaker growth should prove supportive to gold prices. Medium term however, the gold outlook is caught between the opposing forces of more Fed easing and a gradual increase in US real rates on better US economic growth. Our expanded modeling suggests that the improving US growth outlook will outweigh further Fed balance sheet expansion and that the cycle in gold prices will likely turn in 2013. Risks to our growth outlook remain elevated however, especially given the uncertainty around the fiscal cliff, making calling the peak in gold prices a difficult exercise.

We lower our 3-, 6- and 12-mo gold price forecasts to $1,825/toz, $1,805/toz and $1,800/toz and introduce a $1,750/toz 2014 forecast. While we see potential for higher gold prices in early 2013, we see growing downside risks. As a result, we find that the risk-reward of holding a long gold position is diminishing and recommend rolling our long Dec-12 COMEX gold position into a long Apr-13 position and selling a $1,850/toz call to finance a $1,575/toz put to protect against a decline in gold prices. Since 2009, this strategy achieved a better Sharpe ratio than a long gold position.