Turkey has asked NATO to deploy “Patriot” missiles on the Turkish side near the Turkish-Syrian border. 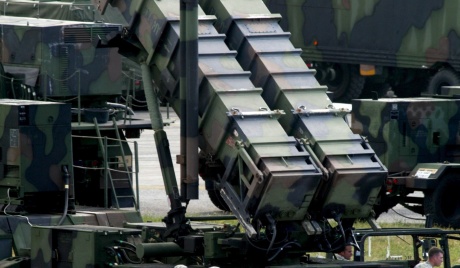 In an interview with the Voice of Russia, Russian analyst Konstantin Sivkov said: “Deploying these missiles in Turkey will be dangerous for Syrian military planes – this is obvious. A lesser obvious thing is that Turkey is getting ready for a war against Syria. If an attack on Syria from the territory of Turkey does take place, this will most likely be an attack not of the Turkish army, but of NATO’s forces.”

“The Middle East is getting ready for a large-sale battle which will very likely affect the Russian part of the Caucasus, and this, in its turn, will be reflected on the entire Russia,” Mr. Sivkov added.

Deployment of Patriots in Turkey means no-fly zone for Syria

The planned deployment by NATO countries of Patriot air defence systems on Turkey’s Syria border will actually amount to the imposition of a no-fly zone for Syrian aircraft in circumvention of the UN Security Council.

The opinion has been voiced by the leading research fellow of the Russian Institute for Oriental Studies, Vladimir Kudelev.

He feels that Patriot systems may drastically influence the fighting between the government troops and the opposition in the north of Syria, since the militants will thus get a 200 kilometre – to 250 kilometre-wide “umbrella” all along the Syrian-Turkish border.

The deployment of Patriots would also undermine the role of the UN Security Council, which, experts feel, would hardly authorize any proposal to impose a no-fly zone for Syrian aircraft.

Plans for the deployment of the Patriot Missile Air-Defence Systems on the Turkish-Syrian border are defensive in character, NATO Secretary General Anders Fogh Rasmussen said in a telephone talk with Russia’s Foreign Minister Sergei Lavrov. Earlier Moscow voiced its concern over the militarization of that region.

The above-mentioned telephone talk was held on the initiative of the NATO Secretary General. Moscow says that Rasmussen wanted to clarify the situation with the deployment of the Patriot Missile Air-Defence Systems on the Turkish territory. Ankara filed a relevant request to NATO on November 21st. The information that appeared in the press more than once last month said that Turkey was making preparations for appealing to Brussels. Possibly, acting in this way Ankara wanted to indirectly put pressure on its NATO allies. As you know, till recently NATO was strongly against getting involved in a conflict between Turkey and Syria, a political analyst, Stanislav Tarasov, says.

“They started asking NATO to interfere in the conflict, using the Alliance’s Clause No.5 – the defence of territories. Which means that they wanted to drag NATO into the conflict and thus, to ensure its military presence in the region. NATO said “No”. Then they resorted to Clause No. 4 – the provision of help”.

NATO said that it would consider Turkey’s request without any delay. And Germany’s Foreign Ministry said that Turkey’s request should be met without any delay. Media reports even said that Berlin was ready not only to provide the Patriot Missile Air-Defence Systems to Turkey but also to send 120 Bundeswehr soldiers to the region. Turkey has not only moved its forces to its border with Syria but has also approved a law enabling it to bring its troops into the territory of its neighbor in case of a military threat. The reason for such a large- scale militarization was firing missiles into the Syrian territory, which official Damascus called an accident. Any escalation of this conflict is inadmissible, Russia’s Foreign Minister Sergei Lavrov said on November 23rd. Moscow is well aware of Turkey’s concern as well as of NATO’s arguments but what is important in this case is the potential, not intentions – that is why any militarization on the Turkish-Syrian border may lead to an uncontrollable turn of events, the Russian minister said.

“Any accumulation of arms creates certain risks and urges all those who would like like to resort to the exterior factor of force to finally use it. We believe that this will not happen, and that all outside players will display maximum responsibility in assessing the on-going developments in the region’.

In the diplomatic language this means that the events in Syria may start developing according to the Libyan Scenario, experts say. As you know, the opposition is losing its support, and Assad has a military superiority in Syria now, an Oriental studies expert, Azhdar Kurtov, says.

“The Syrian-Turkish border has a sophisticated mountain relief. Under such conditions, combat aviation is a very effective method of fighting against the rebels. Thus, if Turkey deploys the Patriot Missile Air-Defence Systems on its territory, it will be able to block Syria using its own aviation in the border regions on its own territory, which may change the turn of military developments in the region. When the overthrowing of the Gaddafi regime was under way, a no-fly zone was established over Libya. Something like that may be created near the Turkish-Syrian border”.

Moscow’s fears may also be caused by something that is not directly linked with the crisis in Syria, a Turkish political analyst, Barysh Adybelli, says.

Mr. Rasmussen and Mr. Lavrov had a phone conversation on Friday initiated by NATO chief.

A statement released by the Russian Foreign Ministry after the talks says that Mr. Lavrov expressed his concerns over NATO`s plans to place Patriot air missiles on the Turkish-Syrian border.

He mentioned Russia’s initiative to help Ankara and Damascus be able to discuss all differences directly amid the increasing military potential in the region in order to avoid incidents.

Turkish Prime Minister Tayyip Erdogan said that Russia’s reaction to the deployment of the Patriot air defense systems on the border with Syria, which Ankara requested from the NATO on Wednesday, was “erroneous”.

Answering the question about the Moscow’s reaction to Turkey’s request to NATO, the official representative of the Foreign Ministry of the Russian Federation Alexander Lukashevich noted on Thursday that Russia considered the militarization of the Syrian-Turkish border to be an alarm signal. “I believe Russia’s statement to be very erroneous”, – the Turkish Prime Minister said in this regard to accompanying journalists on his return from Pakistan from the summit of the “Islamic group of eight”.

Russia has expressed its concern over the militarization of the Turkish-Syrian border, the VoR correspondent Polina Chernitsa has cited the Foreign Ministry spokesman Alexander Lukashevich who commented on Turkey’s request to deploy Patriot missiles on the Syrian border.

Moscow would like Turkey to contribute to the beginning of the inter-Syria dialogue rather than flex its military muscles, Russian Foreign Ministry spokesman Alexander Lukashevich said on Thursday.

“The militarization of the Syrian-Turkish border is a dismal signal,” Lukashevich said, referring to Turkey’s recent request to deploy Patriot anti-missile systems to protect its border with Syria.

He urged Turkey to interact more with the Syrian opposition so as to help start the inter-Syria dialogue as soon as possible.

Turkey already hosted the complex twice. in 1991 and 2003 during the two Iraqi campaigns but never used it.