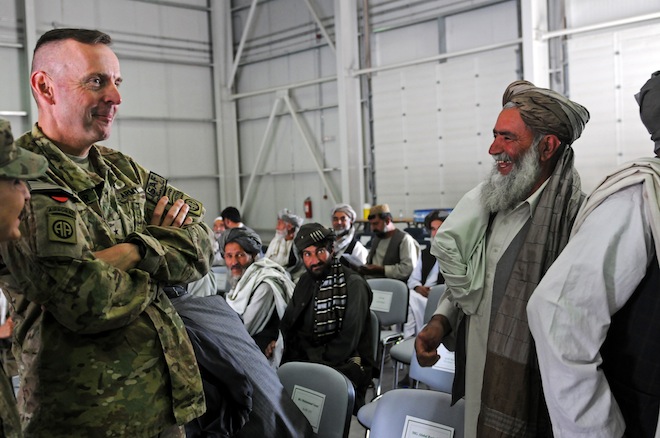 Before Monday, the military had said little else about Sinclair’s court-martial. It didn’t disclose a so-called charge sheet summarizing the evidence against him. Until Monday, it didn’t reveal even whom his defense counsel was (a lieutenant colonel named Jackie Thompson). And the Pentagon rejected a Freedom of Information Act request from the Associated Press for such basic information, on the grounds that disclosure constituted an “unwarranted invasion of personal privacy” and could jeopardize the integrity of Sinclair’s court-martial. (Thompson argued Monday that the prosecution has done just that on its own, by reading confidential attorney-client emails, and is seeking a new prosecutorial team.)

Staff Sgt. Robert Bales — whose own court martial starts on Monday at Joint Base Lewis-McChord in Washington state – got no such protective treatment. But he’s accused of being more than a scumbag with overeager hands. Bales allegedly is a war criminal, committing one of the most heinous acts of the 11-year conflict in Afghanistan. Bales supposedly massacred 17 people in Afghanistan, including nine children. While the Pentagon hardly rushed to disclose anything about his grisly case, it did confirm important details, such as where in Afghanistan the assault took place and the presence of a spy blimp that recorded Bales turning himself in to base forces in southern Afghanistan.

Davis, a former chief prosecutor at Guantanamo Bay, says the military has been similarly open in several of its top criminal cases. The Army released charge sheets and identified the investigating officers when it charged Maj. Nidal Malik Hasan with the Fort Hood shootings in 2009 and Pfc. Bradley Manning in the WikiLeaks disclosures. That stands in contrast to the treatment being received by Brig. Gen. Sinclair. “Clearly those cases are much more high-visibility and high-stakes than the Sinclair case,” Davis says.

The military also aired accusations in a rape case against a basic-training instructor, Staff. Sgt. Luis Walker, Davis notes: ”The Walker court-martial is a similar type of case to Brigadier General Sinclair — a superior alleged to have engaged in sexual misconduct with subordinates … and from a legal and common sense perspective you’d think the two would be subject to similar rules and similar treatment.”

Protecting general officers seems to be a recurring theme for the Army. It still employs a general, William “Kip” Ward, whom an inquiry found to have misused official funds, although it can’t explain what Ward does for his salary and benefits. Few officers get fired for battlefield errors, prompting author Tom Ricks to declare that American generalship resembles tenured professorship, where officers are insulated for all mistakes except embarrassing the institution. If Sinclair actually said that the stars on his shoulder allowed him to do “whatever the [expletive] I want,” that might help explain his attitude.