One of the first articles published on this site was Sinister Sites – St. John the Divine Cathedral, where I’ve described the building’s occult symbolism and its role in the United Nations’ efforts to push a single world religion. Probably the most shocking part of that article was the pictures of the columns, conceived in 1997,  depicting the destruction of New York city (including the Twin Towers). The Church was named after St. John the Divine, the author of the Book of Revelation.The original article showed only two of these columns (the others were not visible at the time I took the pics). Since then however, the other pillars are visible and their symbolism is as esoteric and mysterious as those originally posted. Here they are (in no particular order). 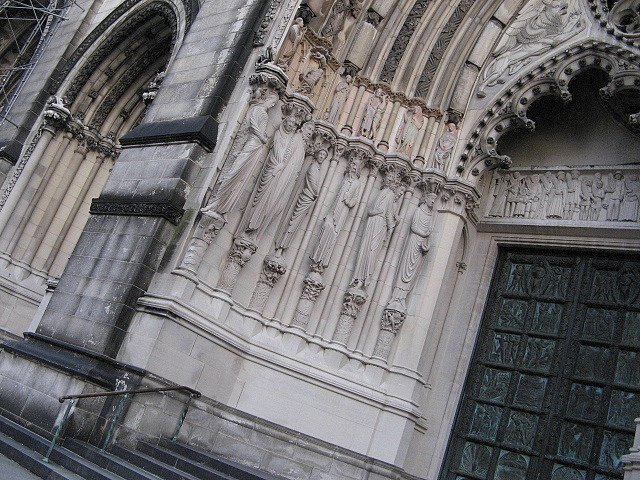 The columns are placed next to the Cathedral’s entrance, under saintly figures. 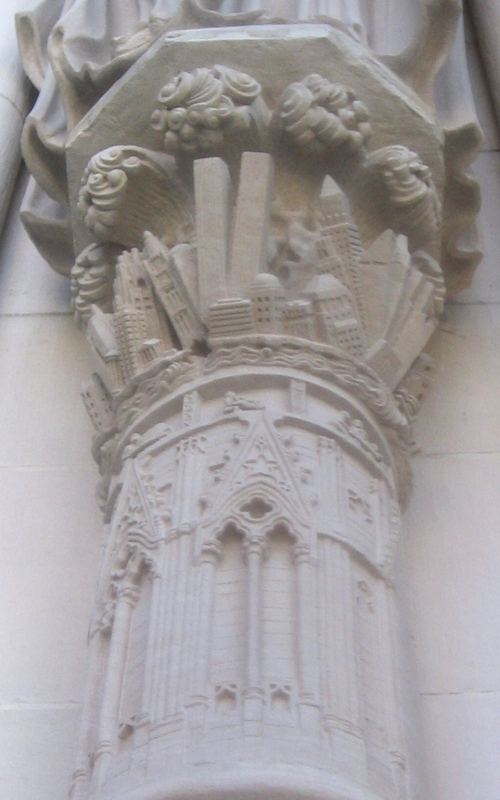 Posted in the original article on St. John the Divine, this pillar depicts an apocalyptic New York city being engulfed by enormous waves. 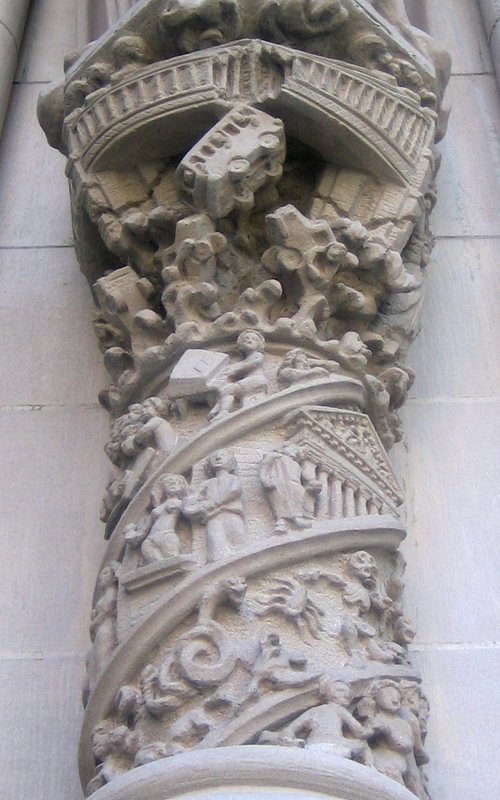 Also posted in the original article, this column depicts the destruction of the Brooklyn Bridge. Underneath is the New York stock market and people trading goods. Is this a reference to the Babylon of the Revelation? 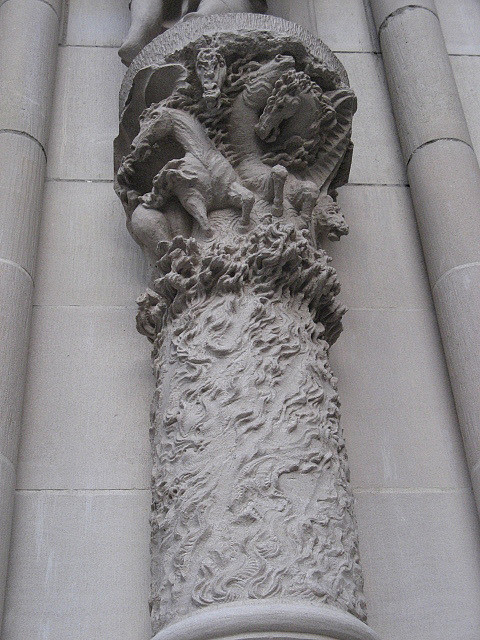 Horsemen of the Apocalypse? 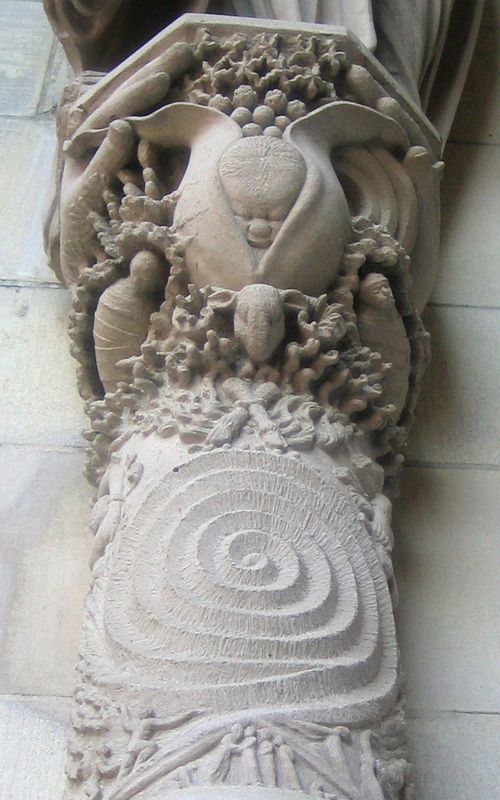 A scene depicting a birth from some kind of flower, surrounded by mummies and above a lamb with its legs tied. Who is being born? Is the Anti-Christ who is said by the Book of Revelation to the beast “coming up out of the earth; and had two horns like a lamb“? Underneath is a spiral vortex (symbolizing change of consciousness?) and people apparently praising or worshipping the figure. 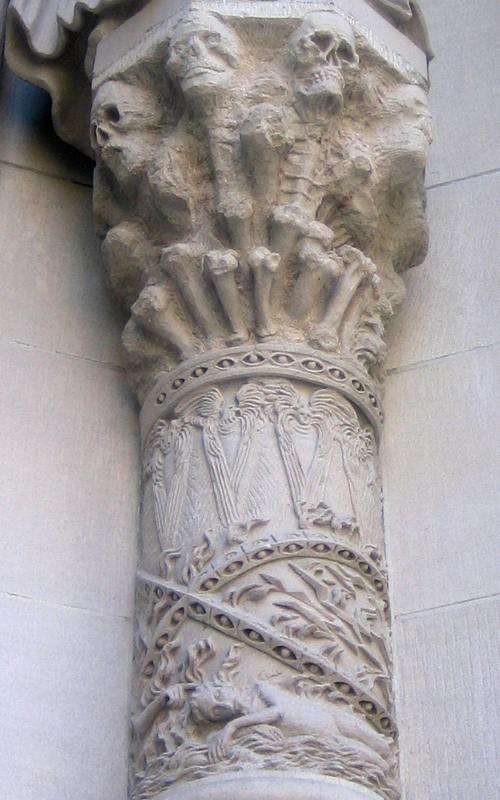 Pillar symbolizing death with the “wheel within a wheel, full of eyes all around” from the vision in the beginning of the book of Ezekiel. 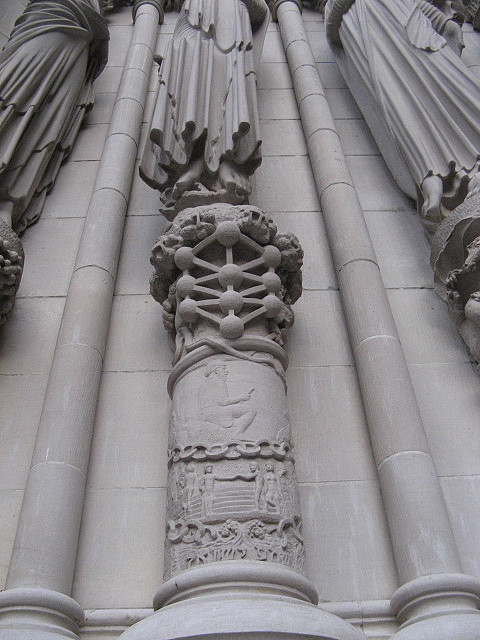 Pillar with the Kabbalistic Tree of Life. The Book of Revelation is said to be encoded with Kabbalistic numerology to reveal its esoteric meaning. 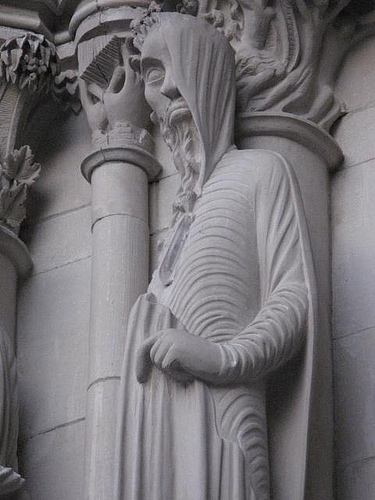 The man above the Tree of Life is also uncharacteristic for a Cathedral. It is one-eyed (see the Eye of Horus) and wears a huge clear quartz amulet, which is said to have magical and metaphysical properties.

Little to no documentation exists about the meaning of the pillars and the rest of the Cathedral contains a lot of art with strange symbolism alluding to catastrophe and a new era. Strange place.