This past Wednesday, nobody reported that a squadron of 8 Israeli F-15 jets dropped 4 two-ton bombs on the giant Yarmouk missile factory on the outskirts of Sudan’s capital Khartoum. Which is just as Israel wanted it. Because what otherwise would be a provocative incursion tantamount to war (if only Sudan wasn’t a complete basket case of a country), was really nothing short of a dry-run for an Israeli attack on Iran. At least according to the Sunday Times. “A long-range Israeli bombing raid last week that was seen as a dry run for a forthcoming attack on Iran’s nuclear facilities has destroyed an Iranian-run plant making rockets and ballistic missiles in Sudan…. The raid, in which two people died, triggered panic across the city. Witnesses said they heard a series of loud blasts followed by the sound of ammunition exploding. “It was a double impact — the explosion at the factory and then the ammunition flying into the neighbourhood,” said Abd-al Ghadir Mohammed, 31, a resident. “The ground shook. Some homes were badly damaged.” And… nobody cares. Here we leave it up to readers to imagine the epic horror, deep revulsion that would greet news that Iran had conducted a pre-emptive strike against Israel by blowing up a missile factory in Turkey, killing two innocent people, just to make sure it can.

A visual summary of the attack: 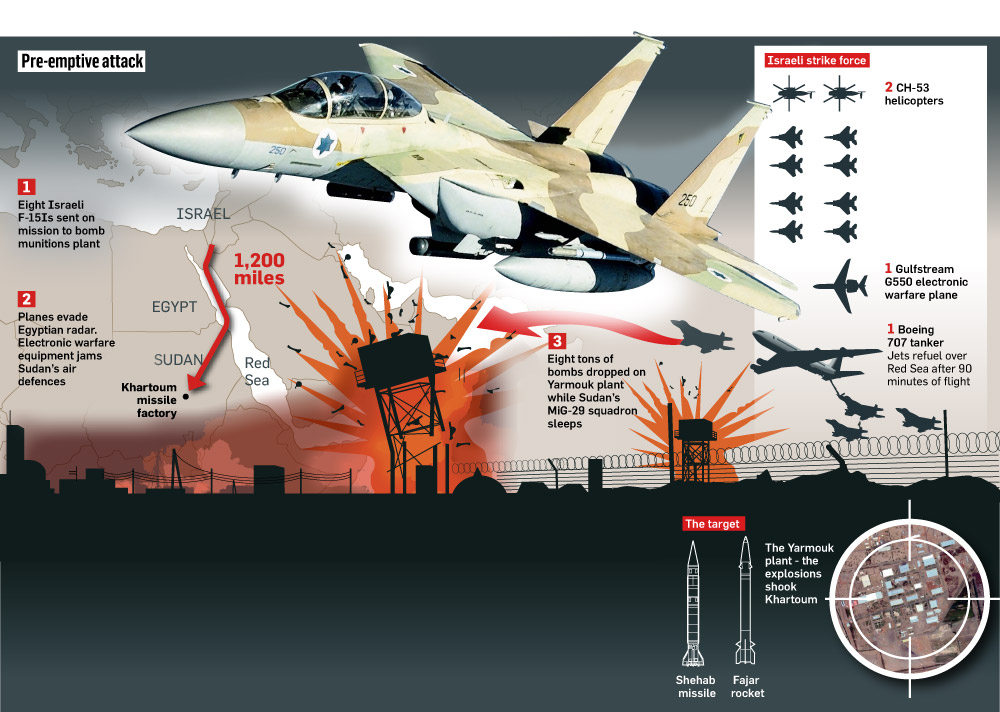 This is what was left of the Somali factory after the Israeli self-appointed (because national borders are for chumps) punishment force was done with it: 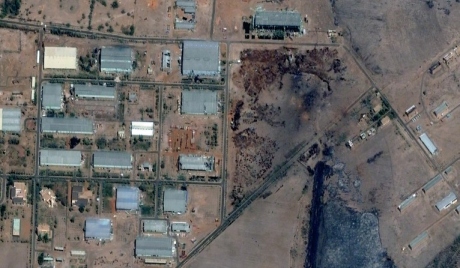 And the full post-mortem of the operation that took place 4 days ago, via Voice of Russia:

The attack occurred in the early morning of October 24, when eight Israeli F-15I jets – four of them carrying two one-ton bombs, escorted by four fighters – struck a gigantic Yamrouk missile site. The evidence is that this strike is a general rehearsal before the Israeli attack on Iranian nuclear facilities.

According to western defense sources, the 2,400-mile return flight took the Israelis four hours, with the jets flying south along the Red Sea. The planes entered the Sudanese air space from the east to avoid Egypt’s missile defenses.

The anti-Iranian operation kicked off two years ago when Mossad agents murdered a Palestinian businessman and a HAMAS highflyer, Mahmoud Al-Mabhouh, in a Dubai hotel suit, retrieving a suitcase with a military agreement between Iran and Sudan, wherein Khartoum offered Tehran its military sites to make weapons.

The Yamrouk facility produced Shahab ballistic missiles, which were then to be delivered to HAMAS rebels in the Gaza strip and other Middle Eastern regions.

In other words: add the Israeli invasion of Iran on the “To Do” list, alongside Grexit, the official Spanish bailout request, the Chinese Congress, the Japan-China territorial re-escalation, sliding down the Fiscal Cliff, and the debt ceiling breach, as soon as possible after the November 6 election.

And all that, of course, assuming Sky Net does not finally take over tomorrow when only robots will be left trading.