For those who still wonder why China has given up on Europe, and is solely focusing on Africa (where none other than Goldman Sachs is opening more offices than any other bank), the IMF explains why the Berlin Beijing Conference 2.0 is now in its peak, if entirely behind the scenes. And yes, the “developed” world wishes it was one big banana republic. Amazing what not having 100%+ debt/GDP will do for one’s economic prospects… 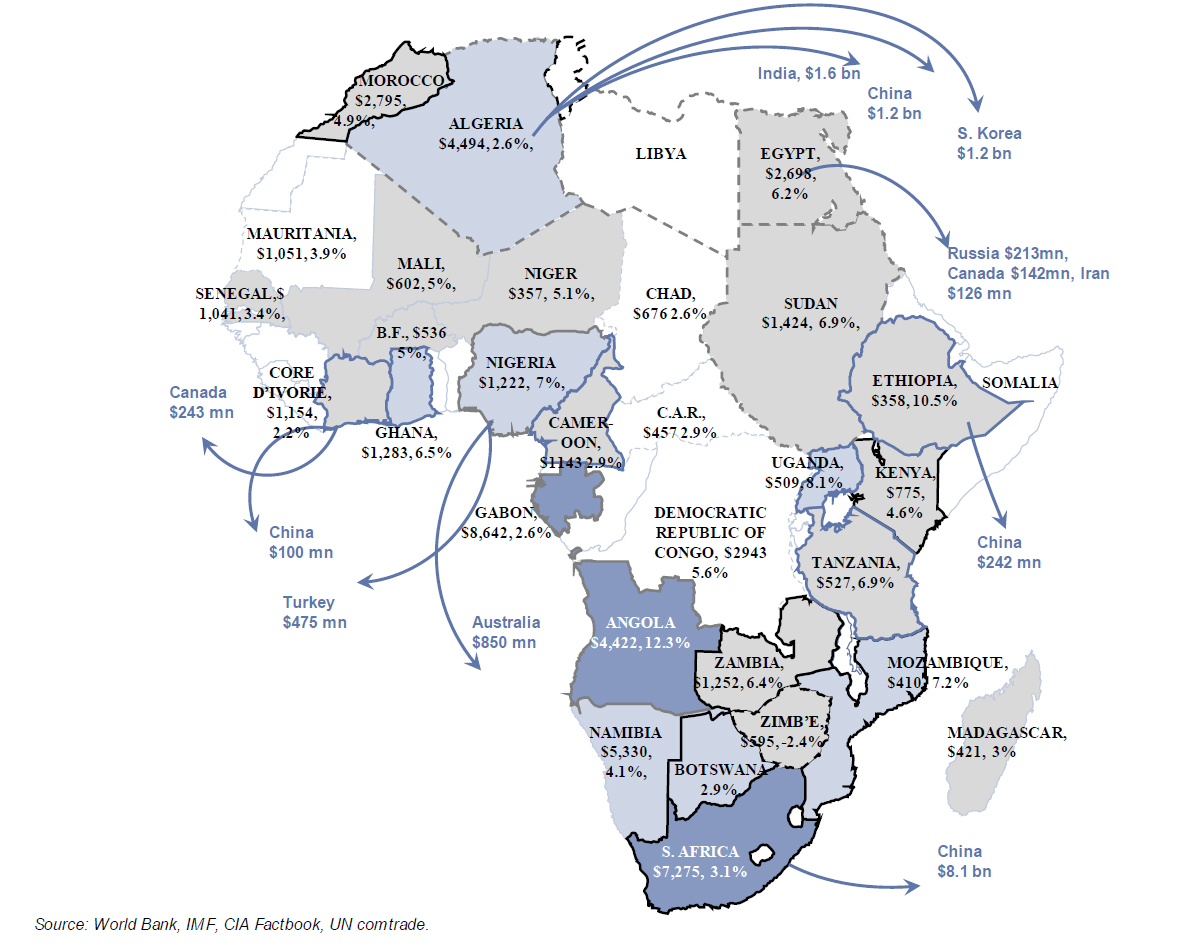 From the IMF WEO:

Kenya and Tanzania are among the group of emerging market and developing economies that showed marked resilience during the Great Recession. Both outpaced earlier advanced economy growth, experienced only a modest growth slowdown during 2008–09, and have charted a subsequent rapid and robust recovery (Figure 4.3.1, panel 1).

A decade of improved macroeconomic stability has helped underpin this resilience. In Tanzania, reforms since the late 1990s liberalized foreign exchange and financial markets and foreign trade, and diminished the role of parastatals. Inflation fell from 20 to 30 percent in the 1990s to 5 percent in the mid-2000s, fiscal revenues increased from 10 to 15 percent of GDP, and gross reserve cover broadly doubled. With the help of the IMF’s Heavily Indebted Poor Country/Multilateral Debt Relief Initiative, the debt burden was also halved in relation to GDP. In Kenya, reforms started earlier, with a major program to liberalize price controls, import licensing, and exchange restrictions, as well as steps to privatize parastatals and reduce civil service numbers. As a result of prudent fiscal policy, Kenya’s public debt fell from 54 percent of GDP in 2001 to 38 percent in 2008.

Macroeconomic stability and market-friendly policies helped provide a durable growth impetus. As in much of Africa, growth in Kenya and Tanzania has been driven by strong domestic markets, led by a growing middle class. For both countries, an improved investment outlook contributed to a sustained expansion in private sector construction spending. At the same time, the adoption of new technologies has contributed to rapid growth in communications and finance. This engine of growth helped shield both economies from the global downturn, with spending on construction, communications, and finance continuing to grow at a 9 to 10 percent real rate throughout the Great Recession.

Strengthened macroeconomic buffers also provided space for a countercyclical policy response to the global downturn. With modest fiscal deficits and sustainable levels of public debt, both countries allowed government spending to rise between 2006/07 and 2008/09—by 4½ percentage points of GDP in Tanzania and by 2 percentage points in Kenya. This fiscal stimulus helped offset growth spillovers from a less favorable external environment. Monetary policy was also supportive. Tanzania halved its short-term interest rates between 2007 and 2009. And in Kenya, a recent IMF study shows that supportive monetary conditions were successful in offsetting most of the contractionary impact of the Great Recession, which would otherwise have resulted in output falling well below its potential (Figure 4.3.1, panel 2). Under floating exchange rate regimes, both currencies appreciated in real terms against the dollar through 2009, though this did not offset the overall impact of fiscal and monetary easing. Both countries saw quick, albeit temporary, deterioration in their overall balance of payments in 2008, but weathered it readily using their healthy gross reserve buffer (of about four months of imports) and by resorting to new IMF financing.

Diversification of production and export activity may also have helped their resilience. At the product level, Kenya has increased its exports of intermediate nonmanufactured goods while diversifying its tourism market. In Tanzania, a significant decline in traditional agricultural exports was offset by growth in exports of minerals and manufactured goods. At the market level, Kenya’s trade with other emerging market and developing economies has remained broadly stable at slightly more than half of total exports; in Tanzania, sales to these economies doubled to represent two-thirds of exports, helping the country decouple from the advanced economy growth cycle (Figure 4.3.1, panel 3).

Both countries are projected to sustain a robust pace of growth through 2012. The rate of expansion is likely to remain somewhat below the peak rates seen during 2006–07 given steps to gradually reverse the 2008–09 fiscal stimulus and because of the monetary tightening adopted since mid-2011 to  bring down food-price-related inflation. Credit growth has decelerated in both countries but remains sufficient to support steady growth. More generally, unlike in some other emerging market and developing economies, growth has been supported by direct investment and capital repatriation, which are less likely to experience sudden stops, and the financial sector remains robust, with low levels of nonperforming loans. The resilience of Kenya and Tanzania could be tested, however, in the event of an intensified downturn in the global economy. Sustained growth in exports has supported their external performance so far, but a new global downturn, including emerging market and developing economies, would bring new balance of payments pressures.

Both countries also have more constrained policy space than at the start of the Great Recession, with higher fiscal deficits and debt levels, higher inflation, and somewhat lower gross reserve cover. Accordingly, both countries are rebuilding macroeconomic buffers under programs supported by the IMF: Kenya’s economic program has been supported by a three-year Extended Credit Facility since 2011, and Tanzania recently accessed an 18-month precautionary Standby Credit Facility to complement its preexisting Policy Support Instrument arrangement.