Excerpted from PIMCO Viewpoints: What’s Your Number at the Zero Bound?

The math of what happens when assumed rates of return go down, driven by a pro-active ZIRP from the Fed, is pretty straightforward. To make up for this, PIMCO notes that those approaching retirement have three choices: a) save more, b) work longer, or c) tighten their belts in retirement. Each of these are clear, individual family choices, but what happens when the whole of society is faced with the same dilemma? What works for one household can be grossly sub-optimal for society.

For now, let us assume that Americans would reject the idea of pre-commitment to significant future belt tightening. They may find that when they get to retirement they have little choice, but this is not something it seems they would rationally choose before having to do so.

If everyone saves more, we consume less, and therefore GDP growth slows down. Anemic growth leads to a Fed on hold for a prolonged period. If expectations for how long the Fed will be on hold are extended, low interest rates – particularly real ones – are the end result.

Given that the personal savings rate is a low 4.2%, significantly below the 6.9% average over the past 50 years, it is hard to argue that we are experiencing the paradox of thrift – at least not yet. We believe that there is a distinct wedge between households’ desired savings and actual savings driven by budget constraints. Less explored is the linkage between “working longer” and interest rates. The right side of Figure 1 shows a possible feedback loop for that cycle – which has the same end result as the Paradox of Thrift, but gets there through a different mechanism. 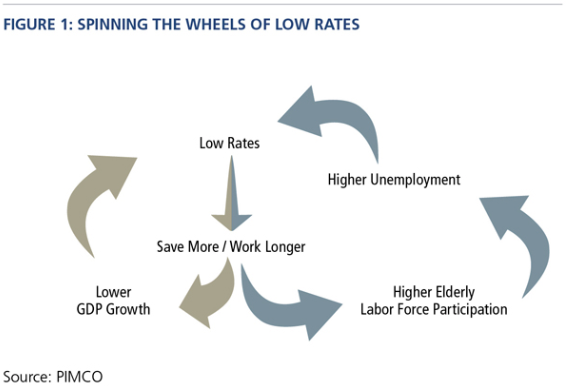 Here we see low rates leading to longer periods in the work force which would lead to a higher fraction of older Americans continuing employment. By construction, if labor force participation goes up, unless jobs go up proportionately, unemployment will rise. Given the Fed’s dual mandate – 1) fight inflation, 2) stimulate growth/lower unemployment – the central bank’s natural response will be to keep rates low, thus completing the circle.

The crux of the argument hinges on two things. First, if elderly labor force participation goes up and there is not an offsetting drop among other age groups, and second, whether there is empirical proof that low rates can be linked to higher labor force participation among older Americans. With respect to the first item, if there were a compensating drop in labor supply among other age cohorts, causing the unemployment rate to be unchanged, that would be unambiguously bad as these individuals are of prime working age. This would indicate serious structural issues and would likely be paired with slow economic growth. Figures 2 and 3 present support for the argument that low interest rates go hand-in-hand with high labor force participation among the elderly. 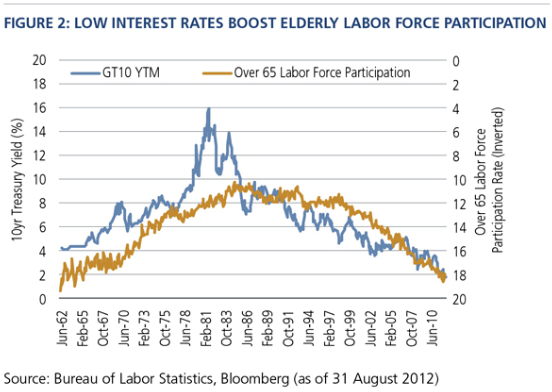 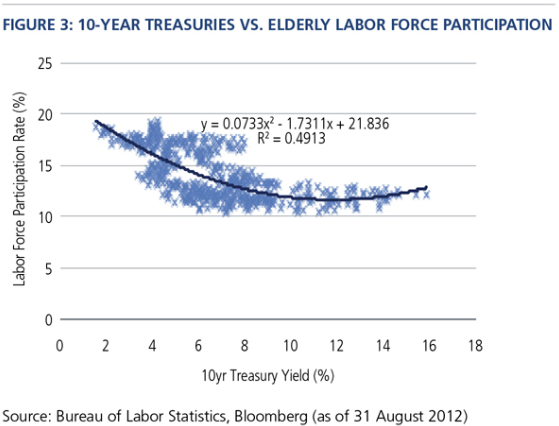 Figure 3 regresses participation on the level of the 10-year rate and its squared value, as the relationship is distinctly non-linear. Elderly labor force participation displays a “convexity” of sorts – the lower rates go, the greater the inertia of the elderly to stay in the workforce. Note the relationship is not perfect, and critics of this argument can point to structural issues in social programs that can give explanation to the time series relationship. It makes sense that elderly participation fell in the 1960s given the passage of Medicare under the Johnson Administration and fell further still given more generous benefits granted in Social Security during the Nixon years. Increases in the Social Security normal retirement age phased in after reform legislation in 1983 induced gradual lengthening of working careers.

Intuitively, low rates leading to longer work lives just makes sense – especially in an era where fewer retirees will draw defined benefit pensions. For those relying more and more on IRAs and 401(k) plans for retirement, the income produced is simply a product of portfolio yield and account balances. They alone bear the risk of market volatility and their own mortality. If anything, we would expect this to tie labor force participation more strongly to yield levels.

This is why some of us are wondering if the Fed is spinning its wheels by sticking to the old model of trying to stimulate growth. Maybe instead of pushing harder on the credit demand side of the ledger by doggedly keeping rates low, central bank policymakers might benefit by looking at other parts of the equation. Specifically, those parts of the puzzle that become more important as America ages.

Work a little longer. Save a little more. Get by with a little less. It’s like each of our numbers is tied to a hot air balloon that seems to rise higher as we get a little closer. Given our outlook for growth and the Fed’s renewed commitment to keeping rates at ”exceptionally low levels” at least through mid-2015, it could be quite a while before those numbers are within reach.