– Israel Shoots Down Unidentified Drone Over Its Airspace (ZeroHedge, Oct 6, 2012):

Just because the middle east did not have enough countries and/or terrorist organizations shooting at random things, in outright attempts of provocation or otherwise, here comes Israel to join the party. From Reuters: “The Israeli air force shot down a drone after it crossed into southern Israel on Saturday, the military said, but it remained unclear where the aircraft came from. “An unmanned aerial vehicle was identified penetrating Israeli air space this morning, and was intercepted by the Israeli Air Force at approximately 10 a.m. (0700 GMT),” the military said in a brief statement. Soldiers were searching the area where the drone was downed – in the northern part of the Negev desert – to locate and identify the drone, the statement said. The Negev desert is near Israel’s southern borders with the Gaza Strip, Egypt, Jordan and the occupied West Bank.”

Drones… drones… which middle east country has a vibrant and advanced avionics industry. Must be Egypt, or no, Jordan, actually make that Syria or even Iran. Good thing it can never be Uncle Sam. Things might get just a little odd in that case.

All joking aside, though, it was only a week ago that Iran unveiled its first drone, potentially after reverse engineering the US RJ-170 that crashed on its territory back in December.

Iran’s Revolutionary Guards have unveiled a home-built long-range drone capable of reaching most of the Middle East, including the Islamic state’s primary regional enemy Israel, state television has reported.

The reconnaissance drone, named Shahed 129, has a range of 2,000 km and is capable of carrying bombs and missiles, state television said.

Amir Ali Hajizadeh, the head of the Revolutionary Guards’ aerospace arm, spoke during an interview on Tuesday on Iran’s state TV.

Hajizadeh said that Iranian scientists designed and developed the drone.

His description of the aircraft was similar to that of the United States’ RQ-170 Sentinel unmanned reconnaissance aircraft, one of which went down in Iranian territory last year. 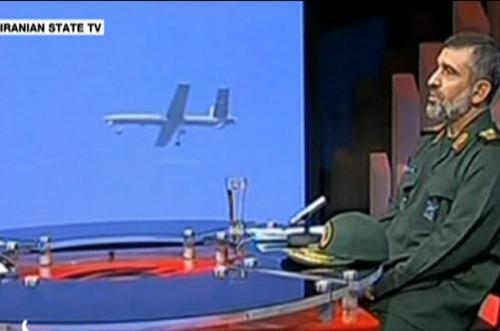 What are the Intrade odds of Israel claiming in a few hours it was an Iran drone, and the overflight was a provocation and merits immediate retaliation? One thing we know: odds will be much higher in a few days when CVN-74 and LHA-5 reach their destination.

In the meantime, this blast from the past:

1 thought on “Israel Shoots Down Unidentified Drone Over Its Airspace”