There is something very wrong with this story. Two months ago, the world’s most legendary race track, Germany’s Nürburgring filed for bankruptcy. As AP wrote then: “Germany’s legendary Nürburgring racetrack and entertainment complex is effectively bankrupt. The circuit—which hosted Formula One’s German Grand Prix last year—is to launch insolvency proceedings amid fears that it could run out of cash while the European Commission considers planned government aid. The state government in Rhineland-Palatinate, which owns the financially troubled Nuerburgring GmbH, decided on the move on Wednesday, the dapd news agency reported…. A state subsidy had been in place since a disastrous development plan left the ‘Ring organization saddled with more than 350 million euros in debt. While the Nordschleife—the circuit’s famous “North Loop” which covers more than 13 miles—generates healthy operating profits, the income does not cover the interest payments on the enormous debt incurred when the state entered into the plan with two developers, Kai Richter and Jorg Lindner.” Sadly such is life in a world in which not everyone is bailed out by the government, and when it comes to the “fairness for everyone, bankruptcy for no one” doctrine, Germany has still not jumped on the bandwagon.

One country which has is the country which many say is alive only due to German generosity, is Greece. And in what may be the biggest slap in the face to Germany, and its recently defunct race track, is the news that Greece is now “unblocking a subsidy” (a subsidy which came from Germany) for €29 billion to, get this, build a Formula 1 racetrack. The same type of racetrack that just went belly up in Germany and cost countless jobs.

And if that isn’t efficient Keynesian allocation of capital in a fixed currency regime, we don’t know what is. What we also don’t know is how Germany will react to know that instead of bailing out its own racetrack, and in the process “creating or saving” several thousand German jobs, German money will instead be used to the same purpose, only a thousand kilometers to the Southeast.

Greece unblocked a subsidy of 28.9 million euros ($37.2 million) for the construction of an international-standard racetrack that can be used for staging Formula One car racing, the Ministry of Development said.

The track, which will be designed to host other events as well, including world championship motorbike racing and go-kart racing, will be built in Xalandritsa near the western port city of Patras at a total cost of 94.6 million euros, the Athens- based ministry said in an e-mailed statement late yesterday. Racetrack Patras SA, a private investment company, will oversee the project.

Greek Deputy Development Minister Notis Mitarakis also signed documents to unblock other subsidies worth a total of 44.4 million euros for a project to build a glass pane-making factory in northern Greece and for modernizing and expanding facilities at the luxury Elounda Bay palace hotel in Crete, including the building of a new conference center, according to the statement.

The racetrack from the air: 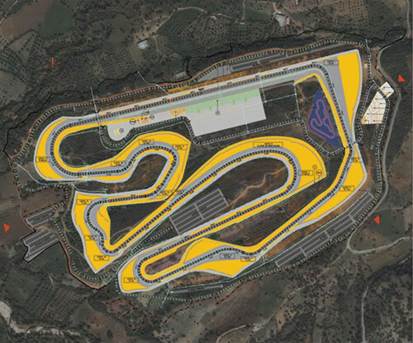 Next: soon to be bailed out Spain gets German subsidies to build BMW and Mercedes plants even as the same plants shutter in Germany. Cue thousands of happy Germans celebrating the efficient allocation of capital.