Even as the popular ADHD affliction is preoccupied with who paid what taxes, and whether this poll shows that guy on top or this one, until tomorrow when they flip providing even more meaningless chitchat opportunities, everyone appears to have once again lost sight of the big picture, which is that two US ships continue full steam ahead toward Iran, namely the CVN-74 Stennis aircraft carrier which has crossed the Pacific ocean and is now a week away from its target, and the LHA 5 Peleliu big deck amphibious warfare ship, where they will join two other aircraft carriers and the LHD 7 Iwo Jima as summarized by the graphic below. Why is US naval presence in the Gulf soaring to a concentration not seen since the last Gulf war? The head of the Iran revolutionary guard may have an idea. From Reuters: Israel will eventually go beyond threats and will attack Iran, the commander of Iran’s Revolutionary Guards was quoted as saying on Saturday.

As speculation mounts that Israel could launch air strikes on Iran before U.S. elections in November, Mohammad Ali Jafari told a news conference that the Jewish state would be destroyed if it took such a step. “Their threats only prove that their enmity with Islam and the revolution is serious, and eventually this enmity will lead to physical conflict,” Jafari said when asked about Israeli threats to strike Iran’s nuclear facilities, the Iranian Students’ News Agency (ISNA) reported.

And just to be clear:

“Right now they see war as the only method of confrontation,” he said.

And when a war does break out, the only question is what China, Russia and India will do. Iran’s stance is clear:  “If they (Israel) start something, they will be destroyed and it will be the end of the story for them,” Jafari said, according to ISNA.

One thing is guarranteed: in one-two weeks US naval presence in the 5th Fleet will be unprecedented, consisting of at least 3 US aircraft carriers, and 2 amphibious warfare groups, excluding any other naval support the rest of the developed world will throw in. 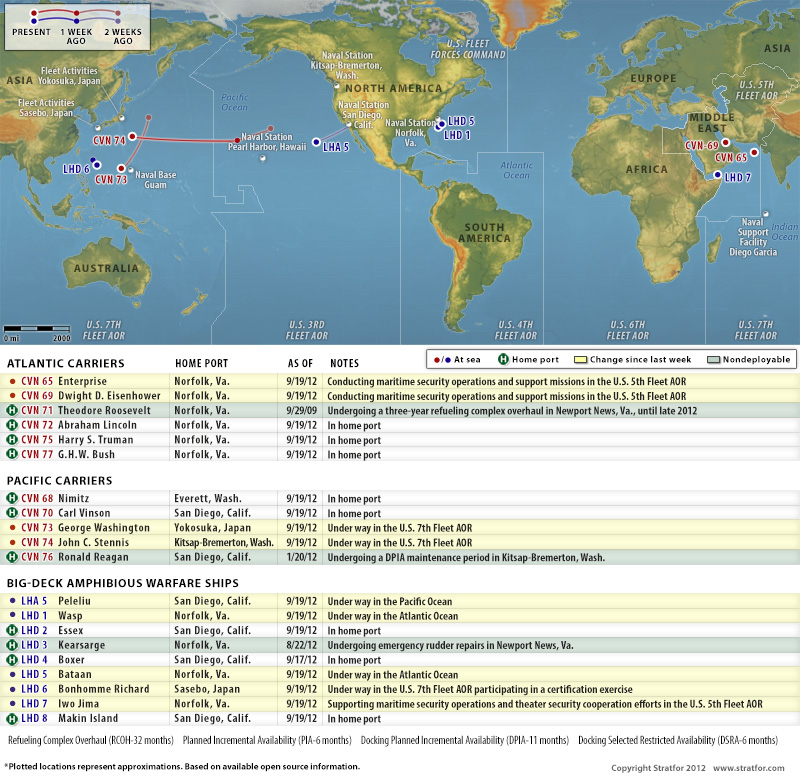 In other words, if for some reason the US needs a big diversion in the days just before the election, it is sure to get it.