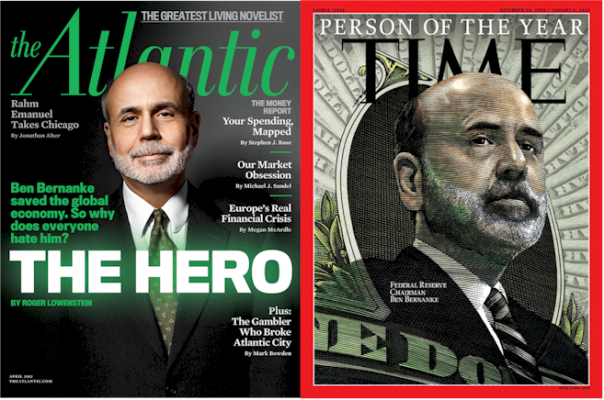 While Ben Bernanke’s announcement that the Federal Reserve will embark on an open ended scheme to purchase $40 billion in mortgage-backed securities each month has been touted by the establishment media as the beginning of “QE3″ it is in fact nothing less than another banker bailout in disguise.

While many have rightly attacked the Fed’s policy of printing money as a band aid that does little to solve the economy in the long term, this new move isn’t even about that. The policy announced yesterday will merely see the Fed use taxpayer money to purchase more bad debt in the form of junk mortgage-backed derivative based securities that have been sold over and over again.

This has nothing to do with getting the economy going again and will only serve as yet another huge wealth transfer from the middle class to the elite.

While the fed claims the move will facilitate more lending it will do nothing of the sort. As the China Securities Journal reports today, “QE3 is not likely to result in more loans.”

“The truth is that it isn’t as if banks are hurting for cash to loan out,” writes Michael Snyder. “In fact, right now banks are already sitting on $1.6 trillion in excess reserves. Just like with the first two rounds of quantitative easing, a lot of the money from QE3 will likely end up being put on the shelf.”

Indeed, after the TARP bailout back in 2008, the Federal Reserve paid the big banks to withhold loans, because the bailouts are not about reinvigorating the real economy, they are about propping up the stock market for the rich while the real economy goes to the dogs.

QE1 and QE2 both did absolutely nothing to rescue the economy. Despite a massive injection of quantitative easing over the last four years, the unemployment rate in the United States has barely improved.

In addition, the “wealth gap” between rich and poor has vastly increased. This again illustrates how actions such as the one announced yesterday have nothing to do with helping the little guy get back on his feet and everything to do with the concentration of financial power into fewer hands.

As George Washington’s Blog points out, “This is just another bailout for the big banks. (If the government had instead given money directly to the consumer, we would be out of this economic slump by now).”

“Bernanke claims that the main justification for QE3 is to boost employment. This is slightly ironic, since Bernanke’s policies are largely responsible for creating high unemployment in the first place. The real justification is to try to artificially prop up asset prices. But that approach has been proven to be an absolute failure.”

Indeed, the Federal Reserve admits that its new program will do little to alleviate the suffering of jobless Americans.

“I want to be clear — While I think we can make a meaningful and significant contribution to reducing this problem, we can’t solve it. We don’t have tools that are strong enough to solve the unemployment problem,” Bernanke said yesterday.

The fact that we haven’t seen massive inflation since the start of the Fed’s so-called quantitative easing policies illustrates how the money is not even being pumped back into the economy. The only real inflation has been in the luxury sector because the rich are getting richer and spending more while the poor continue to live on or below the poverty line.

QE3 is merely another massive wealth transfer and a tool of waging economic warfare on the poor and middle class, another manifestation of neo-feudalism to destroy America and have the global bankers pose as the saviors.

The economy is being destroyed by design so that the elite can exploit the fear and chaos caused by the collapse in order to centralize power and control. This can also be seen over in Europe where Jose Manuel Barroso is exploiting the crisis in a bid to turn the EU into a “federation”.

Bernanke’s latest move is merely a continuation of the engineered takeover of the U.S. economy and will achieve nothing aside from enriching the wealthy to an even greater degree while ensuring the rest of us continue to see outliving standards decline on the path to economic serfdom.