Back in early July we wrote that contrary to expectations, veteran Middle Eastern aircraft carrier CVN-74 Stennis would end its shore leave far earlier than expected, and be redeployed back to its usual stomping grounds just off Iran months ahead of schedule. As of days ago, the Stennis has quietly departed Naval Base Kitsap-Bremerton and is off. It will join CVN-65 Enterprise (which is doing its last tour of duty ever before being decommissioned) and CVN-69 Eisenhower in the Arabian Sea, aka off the coast of Iran. This will be one of the only times in history when the US has had three aircraft carriers in close proximity to those evil Iranians who are hell bent on global domination. Expect Stennis to reach Iran (and be available to support an Israeli attack of Iran) in the last third week of September. Then determine when the next full/new moon is following the arrival of Stennis at its destination, and buy Brent calls just ahead. Finally, profit. From Kitsap Sun:

The USS John C. Stennis, with more than 2,000 sailors aboard, left Naval Base Kitsap-Bremerton on Monday to begin what’s expected to be an eight-month deployment. The Stennis has only been home since March 2, when it returned from a seven-month deployment in the Middle East. But with tensions remaining high in that region, Defense Secretary Leon Panetta ordered the aircraft carrier back out to sea. The carrier had not been scheduled to deploy until January. 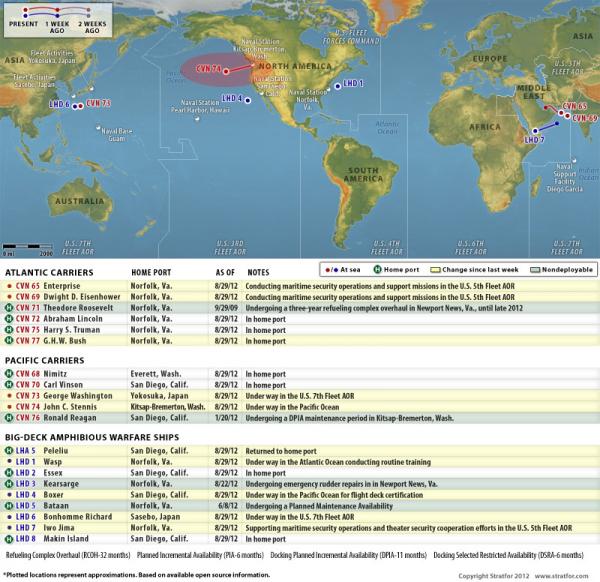