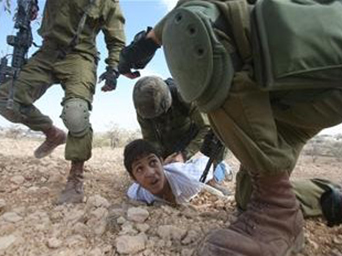 An October 23, 2010 file photo shows Palestinian youth is arrested by Israeli soldiers for throwing stones during a protest.

Former Israeli soldiers who served in the occupied territories say that mistreatment of Palestinian children by troops is “routine” and occurs even at times of relative calm. A collection of over 30 testimonies published on Sunday by Breaking the Silence, a group of ex-servicemen critical of army practices, says physical violence, often arbitrary, is used against very young children.

“The testifiers depict a routine in which Palestinian minors, often under 10 years of age, are treated in a manner that ignores their young age,” says the 72-page booklet.

“Although the events described here took place after the peak of the second intifada, at a time perceived as calm and uneventful from a ‘security’ standpoint, the reality that emerges from the testimonies shows that harsh treatment of Palestinian children continues unabated,” it says.

In one example, a former staff-sergeant, unidentified like most who give testimony, describes a punitive raid on a neighbourhood in the Ramallah area following earlier clashes with Palestinians.

He said a dozen soldiers with wooden clubs “beat people to a pulp. Finally the children who remained on the ground were arrested. The order was to run, make people fall to the ground,” he said. “A slow runner was beaten, that was the rule,” he said.

Another former staff-sergeant describes an operation against the West Bank village of Azzun, where stones had been thrown from a curve in the road at motorists from the nearby Israeli settlement of Maale Shomron.

“We got to the village, drove up to the houses closest to the curve, and then saw a group of children, 9-10 years old, running away,” he said.

“First they ran, went onto the balcony of some house, and then the commander took a stun grenade and hurled it into that balcony. It blew up. I don’t think it hurt them or anything, but it made them run out of the balcony.” He describes a chase after the children during which his commander cocked his firearm and aimed in the face of one of them from close range.

“The kid was just freaking out, certain he was going to be killed, and begged and pleaded for his life,” the soldier said. “A kid has to beg for his life? A loaded gun is pointed at him and he has to plead for mercy? This is something that scars him for life.

“The Israeli military said in response that Breaking the Silence had not provided it with sufficient background material to enable it to investigate specific claims.

“By compiling testimonies over long periods of times and refusing to provide additional details, the organisation proves its true intentions — rather than facilitating proper investigation, the organisation seeks to generate negative publicity regarding the IDF and its soldiers,” it said in a statement.

Some might say I am an anti-semite, but the fact is that I am not.  I happen to like Jews and Israel.  I am, however, anti-terrorist, anti-murderers, anti-thieves, anti-fraud, anti-political manipulators, anti-deception, anti-liars.  I am anti-all the things that defines a Zionist who only goal is death, destruction and world dominance.  I was not surprised by the article because the Zionist have been oppressing and persecuting Palestinian men, women and children since 1947.