A twenties-something “genius ape” named Natasha has been found to demonstrate more intelligence than a typical U.S. high school student. The findings have been published in the peer-reviewed science journal Philosophical Transactions of the Royal Society B.

As the paper documents, Natasha repeatedly demonstrates skills and reasoning that escape modern-day high school students. “The caretakers named Natasha as the smartest chimpanzee, precisely the same chimpanzee that our tests had revealed to be exceptional,” wrote authors Esther Herrmann and Josep Call of the Max Planck Institute for Evolutionary Anthropology (reported at Discovery.com, link below).

According to these scientists, Natasha has demonstrated the following skills; all of which escape the dumbed-down mental capacity of a typical U.S. high school student:

• An ability to disable an electric fence by throwing branches on it and observing the sparks. Once the sparks stopped, Natasha knew the fence was disabled and then proceeded to climb it. (A typical U.S. high school student cannot figure out how to pull his pants up around his waist.)

• The ability to wield a special tool to avoid a trap while locating hidden food. (U.S. high school students eat toxic food chemicals every day which trap them in a lifetime of chronic disease.)

• According to scientists, “ape intelligence might be a bundling of skills related to learning, tool usage, understanding of quantities, and an ability to reach conclusions based on evidence and reasoning.” (http://news.discovery.com/animals/ape-genius-chimpanzee-intelligence-…) U.S. high school students, on the other hand, largely run their lives based on drama, jealousy, sex and emotional reactions to simple stimuli such as corporate logos on basketball shoes.

• Intelligent chimpanzees are well known to manufacture their own tools in order to extract (yummy) termites out of holes in trees. A typical U.S. high school student barely has the skill to open a frozen burrito wrapper and punch “START” on a microwave oven.

On a similar note, it is well known that the U.S. military conducts vaccine medical experiments on human soldiers for the sole reason that “humans are cheaper than monkeys.” Lab monkeys actually try to escape from vaccine assaults, while humans actually line up at pharmacies and PAY to be injected with experimental vaccines!

The question isn’t whether apes are smarter than humans… it’s actually this far more important question: Are many humans dumber than apes?

Chimpanzees are more AWARE than the average human, too

According to the latest science, chimpanzees are conscious, aware beings with just as much awareness as humans (http://news.discovery.com/animals/chimpanzees-self-awareness-110504.h…). Humans, on the other hand, go to great lengths to diminish their awareness with alcohol, drugs and mind-altering psychiatric drugs.

Interestingly, organizations contributing to the problem of dumbed-down, zombified humans include Discovery.com where the story of Natasha the genius ape was originally reported. To the right of the story is an advertisement for — get this — a mind-altering psychiatric drug known as ABILIFY. The text right there on the page next to the story about how smart the “genius ape” is reads:

Apparently, Discovery News did not think this fact is a sufficient reason to ban such ads from its website. As long as there’s money to be made promoting these toxic chemicals, who cares if a few children commit suicide or blow away their classmates in a mass shooting?

That’s how stupid humans are, by the way: They promote things that harm other humans as long as they make a profit in the process. Chimpanzees don’t seek out mind-altering psychiatric drugs. Only a human is stupid enough to assault their brain chemistry with a patented, synthetic chemical made in a factory. You can’t brainwash an ape into thinking childhood is a disease. (www.youtube.com/watch?v=NPS9SohzMjw)

The real hilarity in this story, however, is the subhead text in the Discovery.com article which reads, “Zoo Chimp Makes Elaborate Plots to Attack Humans” while adjacent to this column, the site runs an ad for a mind-altering drug that accomplishes the same thing!

Here’s the image from the Discovery News website, which makes Discovery.com look like an ignorant cabal of drug-pimping apes: 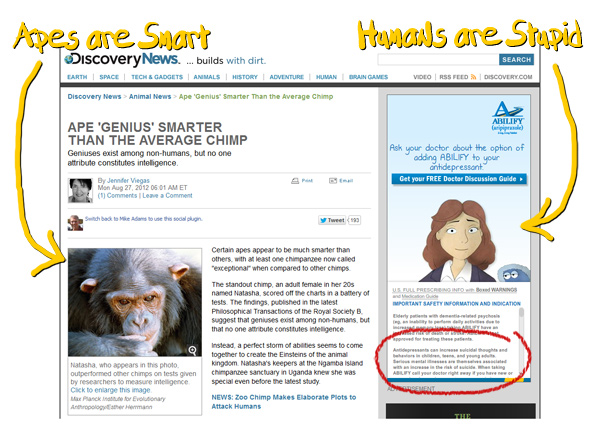