Just over 16 months ago, the NASDAQ did an unusual thing. As the WSJ noted at the time, AAPL, which had reached a 20% weighting in the NASDAQ-100, was rebalanced to 12.3%. This weighting was apparently too much for the index-provider who feared “the tech company’s big weighting means that a change in fortune for the maker of iPhones, iPods and iPads has a huge impact on one of the most heavily traded indexes in the market.”Since 04/05/11, when that rebalance occurred, AAPL’s market cap has doubled, while the NASDAQ-100 is up just under 20% ($627bn versus $3.15tn). With the current weighting of AAPL in the NASDAQ-100 at 19.8%, we wonder what is next – as the WSJ noted at the time, any “rebalancing is likely to kick off waves of trading… as money managers scramble to adjust holdings to reflect the new composition of the index.” Interestingly, AAPL has reached 20% of the index twice this year already – which just happened to coincide with significant selling pressure on the stock – will third time be the charm?In April of last year – AAPL reached over 20% weighting in the NASDAQ-100 index – and here is the rebalancing that occurred – via WSJ: 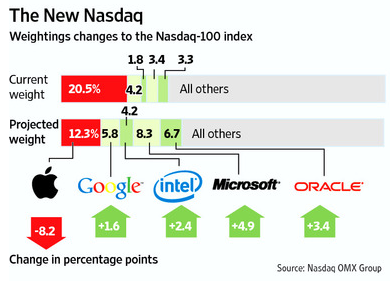 AAPL has risen 97% since the last rebalance, while the NDX has risen only 19.6% and its other major peers have not kept pace at all… 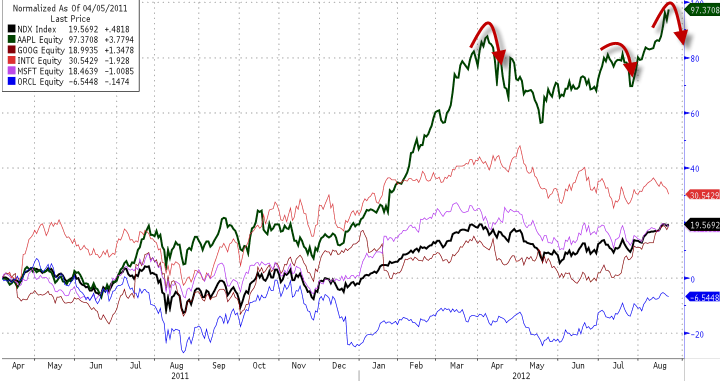 This leaves AAPL at 19.8% weighting by market cap in the index – which has occured twice before this year – and each time (as we show above) the company’s share price has rolled over. 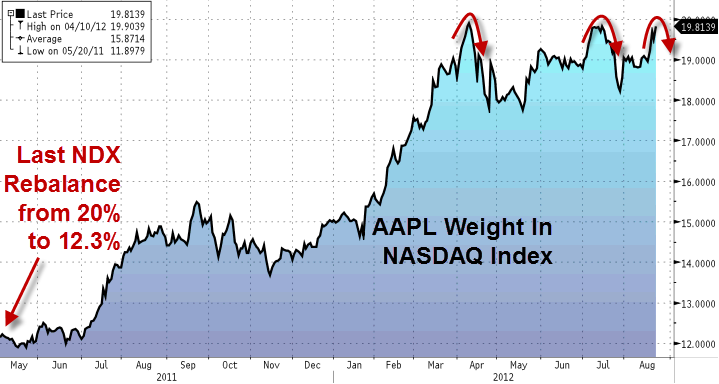 We can only imagine the need to control AAPL’s weighting is critical given the amount of automated selling that would be involved were it to trigger a rebalance – and the sheer size and plethora of long-only managers who hold the giant tech company.

It does seem that this provides a short-term opportunity at a minimum – to be short AAPL and long NDX – as the 20% weighting limit that was discussed in the WSJ article seems critical.