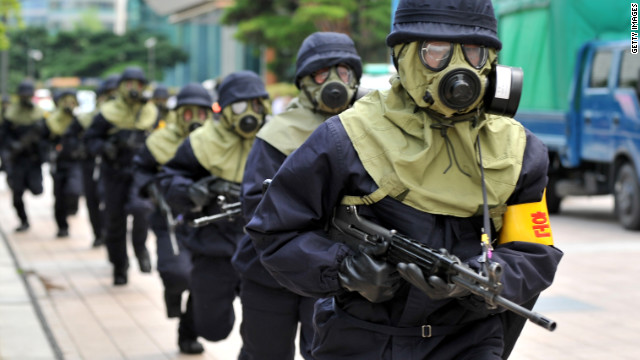 North Korean leader Kim Jong Un told his troops to be vigilant during upcoming training exercises between South Korea and the United States, saying they should be ready to lead a “sacred war,” state media reported Saturday.

Kim’s comments came during a visit on Mu Island with troops who participated in the 2010 shelling of South Korea’s Yeonpyeong Island, an attack that North Korea at the time said South Korea provoked by holding war games off their shared coast.

“He ordered the service persons of the detachment to be vigilant against every move of the enemy and not to miss their gold chance to deal at once deadly counter blows at the enemy, if even a single shell is dropped on the waters or in the area where the sovereignty of (North Korea) is exercised,” the state-run KCNA news agency reported.

The warning followed an announcement by the United States and South Korea that their joint “Ulchi Freedom Guardian” training exercises would begin Monday and conclude by August 31.

North Korea was informed of the dates of the exercises by the U.N. armistice commission.

The Neutral Nations Supervisory Commission, which was established by the Korean Armistice Agreement that brought about an end to the Korean War, will supervise the exercise, South Korea and the United States military said in a joint statement. The commission includes representatives from Switzerland, China and other nations selected by the United Nations.

Washington and Pyongyang have no diplomatic relations. North and South Korea have no formal ties and remain technically in a state of war since a 1953 truce that ended the Korean War.

During the visit with troops, Kim observed Yeonpyeong Island “clearly visible from the post,” KCNA reported.

The Yeonpyeong attack in November 2010 was the first direct artillery assault on South Korea by North Korea since 1953, when an armistice ending the fighting.

Two civilians and two South Korean marines died in the attack, which South Korea’s government at the time called a “definite military provocation” by North Korea.

The sparsely populated Yeonpyeong is located just south of the Northern Limit Line, the line drawn in 1953 by the United Nations at the end of the Korean War. The United Nations drew the line three nautical miles from the North Korean coast and put five islands close to the coast under South Korean control.

That was supposed to be a temporary arrangement. But in the absence of a full peace agreement, the Northern Limit Line remains in place.

North Korea has been virtually isolated from the world by international sanctions over its development of a nuclear program.