Update: in the 20 or so minutes since uploading this article, AAPL added another OpenTable in market cap. It has in the course of a day added the same market cap as Linked In and just shy of Sony.

Moments ago Apple, long since the largest company in the world by market cap, just crossed $600 billion in capitalization, needless to say a record high, after adding the equivalent of 2.4 RIMMs in market cap in a few short hours. As of this moment, the company that makes a phone, a tablet, various computers (all of which now have an upgrade lifecycle inside of 1 year and ever shorter), has a product “ecosystem”, retail stores and may be launching a cable box, is larger than the entire semiconductor sector, larger than the entire retail index, and at this rate of parabolic blow off top growth, will be larger than both combined in about 5-6 months. We can only hope that the company will soon use its $110+ billion cash hoard to launch a captive bank to finance the purchase of its products because unless consumers’ disposable incomes are growing at the same rate (with penetration already quite high), and assuming of course it is still cool to have an AAPL product in a few years (just as it was the peak of coolness to have a Palm Tungsten a decade ago… or a RIM phone 5 years ago), the company that is now owned by about 250 hedge funds will certainly have growing pains in the future. 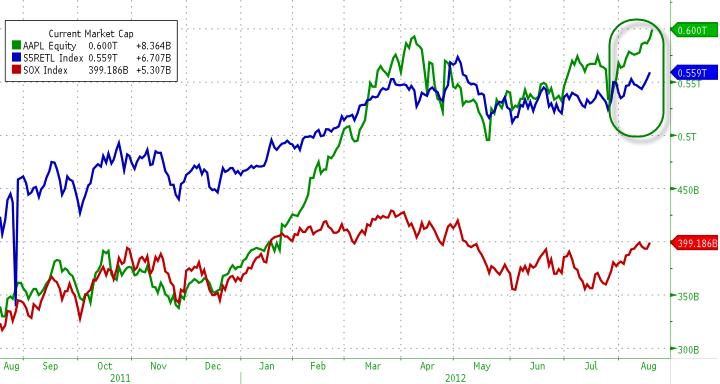