The World Gold Council released its latest quarterly Gold Demand Trends report today.Demand for gold as an investment got crushed in the second quarter this year, declining 25.9 percent from last quarter – the worst quarter-over-quarter drop seen since the third quarter of 2010.

The drop in investment demand was led by weakened demand in India and China for physical gold like bars and coins. The WGC report says that in both countries, “interest in gold bars and coins remains fundamentally strong,” but the slump in demand in the second quarter came from profit-taking in India and directionless price action in China.

On the other hand, official sector purchases soared in the second quarter, with central banks around the world scooping up 157.5 tons of gold. That number marks a 62.9 percent increase from the first quarter and a whopping 137.9 percent increase year-over-year.

It is also the most gold central banks have bought up in a single quarter since the WGC started tracking the numbers in the Q2 2009.

As you can see, much of that official sector demand came from emerging market central banks. Here’s a passage from the report looking at Kazakhstan as an example:

Some central banks have clearly indicated te hir intention to bolster gold reserves. One such institution is the National Bank of Kazakhstan, whi hch state in July that it had increased its 2012 target for gold purchases from 24.5 tonnes to 26 tonnes. The bank has previously stated that it plans to buy the country’s entire domestic production over the next two to three years in order to reduce its reliance on the US dollar as a reserve asset, confirming that it is targeting an allocation to gold of 15% of its foreign exchange reserves.

The WGC’s report had a section focused on Russia where they charted the historical gold trading activity of the official sector. 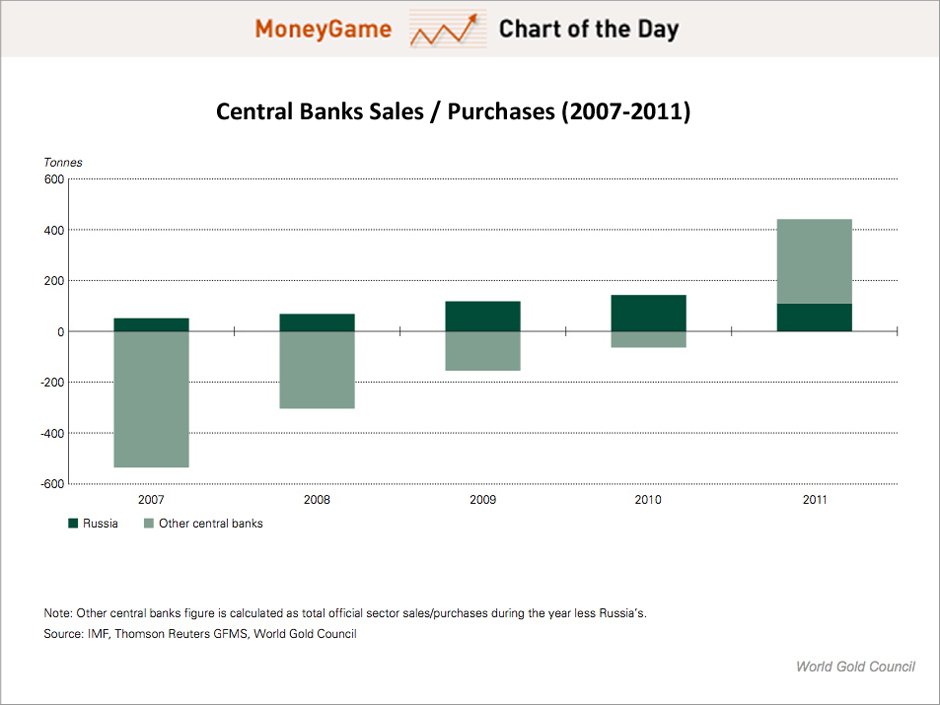