Exposure to radioactive material released into the environment have caused mutations in butterflies found in Japan, a study suggests. 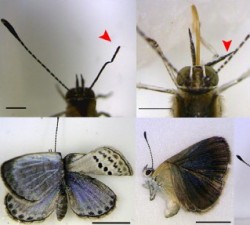 The link between the mutations and the radioactive material was shown by laboratory experiments, they report.

the team found that areas with greater amounts of radiation in the environment were home to butterflies with much smaller wings and irregularly developed eyes.

It was by breeding these butterflies that they began noticing a suite of abnormalities that hadn’t been seen in the previous generation – that collected from Fukushima – such as malformed antennae, which the insects use to explore their environment and seek out mates.

Six months later, they again collected adults from the 10 sites and found that butterflies from the Fukushima area showed a mutation rate more than double that of those found sooner after the accident.

the findings from their new research show that the radionuclides released from the accident were still affecting the development of the animals, even after the residual radiation in the environment had decayed.

Lead researcher Joji Otaki from the University of the Ryukyus, Okinawa

University of South Carolina biologist Tim Mousseau, who studies the impacts of radiation on animals and plants in Chernobyl and Fukushima, but was not involved in this research