The Department of Homeland Security has already purchased over 750 million rounds of ammunition as they lead up to what many believe will be a large scale confrontation with the American people. 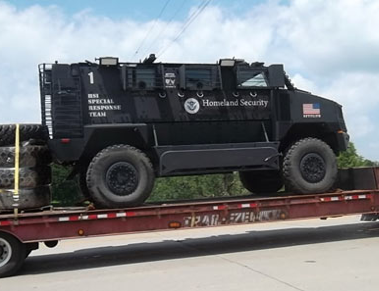 Now, a new purchase order has been uncovered on the infamous FBO.gov website that includes up to another 750 million rounds of various types of ammunition.

The cover for the order is that the ammo is for “training” purchases yet this total purchase would mean that homeland security has ordered over a billion rounds of ammunition, bullet proof checkpoints with stop and go lights, riot shields, painted everyday Americans as terrorists, and worked in conjunction with the US Army to prepare for some sort of civil war.

The Government guarantees a minimum of 1,000 rounds per year on each resultant contract. Contracts will be for a base year and four (4) 12 month option periods.”

In a video report on the End the Lie YouTube Channel, Madison Ruppert detailed the purchase and homeland securities apparent obsession with snatching up seemingly all the ammo on earth to the point of absurdity.

He also noted that even if this ammo was purchased strictly for training purposes, we simply DO NOT have the money to be buying hundreds of millions of rounds of ammo for agents who operate solely in the United States.

The fact that there is an ever increasing likelihood of a financial collapse in America is another much speculated about reason for the recent ammo purchases and plan for civil war as a whole.

As Paul Joseph Watson noted in a recent article:

“A 2008 report produced by the U.S. Army War College’s Strategic Institute warned that the United States may experience massive civil unrest in the wake of a series of crises which it termed “strategic shock.”

“Widespread civil violence inside the United States would force the defense establishment to reorient priorities in extremis to defend basic domestic order and human security,” stated the report, authored by [Ret.] Lt. Col. Nathan Freir, adding that the military may be needed to quell “purposeful domestic resistance”.

In the last five years we have seen literally dozens of examples that prove the startling fact that portions of our government are planning on turning the guns on the American people. (just as the terrorism narrative changes from al Qaeda to homegrown American terrorists)

It is absolutely imperative that the citizens of this once great country continue to speak out about this build up by telling friends and family and, perhaps most importantly, reaching out to military and police officers in your area with the hope that they will stand with the people rather than the tyrants.