Italy just announced its all-time record high general government debt load at EUR 1.973 trillion. What is perhaps most stunning, given all the talk of austerity, cutting back, reforms, and change is that the size of this debt is growing at an ever-increasing pace that is simply stunning. Pre-Euro (1999), Italy’s debt was growing at a rate of just less than EUR 2 billion per month; in the eight years from then until the crisis in 2008, Italy’s pace of debt growth (fostered we are sure by the convergent cheapness of funding and their immutable belief in invincibility) almost perfectly doubled to EUR 3.8bn per month. Since 2008, and the onset of excess Keynesian ridicule we assume, Italy’s debt load has grown at a stunning pace of EUR 6.4 billion per month and perhaps most incredible; however, the last nine-months (since the peak ‘peak’ of the crisis in September of last year) has seen the pace of debt-load growth surge to EUR 9.5 billion per month. Sustainable levels of exponential debt growth – sure! 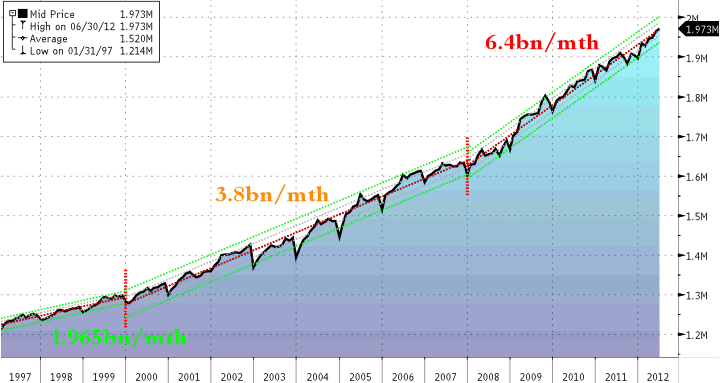