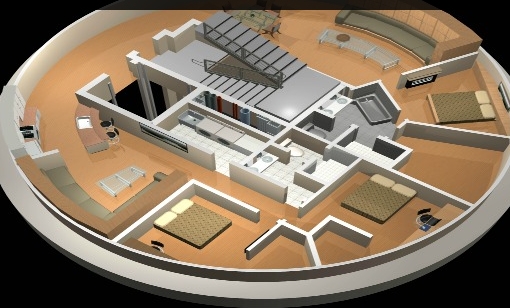 The clock on your $30,000 Breguet watch is ticking, and you realize you only have roughly five months until the ‘end times.’ 2012 is just around the bend. The Mayans may not have developed a cure for smallpox, but they did warn that this year may be the end of civilization as we know it. (Or at least that is what Jon Cusack’s hypnotic acting performance in 2012 has brilliantly led us masses to blindly believe.)

You are too smart, and rich, to panic. So instead you splendidly flip through your diamond studded, gold dust imbued, gilded iPad trying to find this article. Like every bright and successful genius you remember Exec Digital gave a detailed guide on the best luxury hot spots to flee to when escaping impending Armageddon calamity.

You can thank us for your salvation later. A post-apolocolyptic tweet will be much appreciated in the rubble world of Apocolyptica. However, now is not the time for grateful platitudes. We need to figure out where you are going to haul your hiney when the rapturous lightning starts striking. And hint: it will not be North Korea.

Nuclear fallout, tsunamis, zombie invasions– impending horrors are scaring the rational thinking out of even the world’s best and brightest. And for good reason. Life is risky when lived above ground. Anybody who has ever been crapped on by a pigeon knows – living with our precious heads exposed to the sky may not be worth the hazard. Hence the new, ‘location, location, location’ driven trend in underground doomsday real estate.

No bunker is quite as fail proof and luxurious as Larry Hall’s Survival Condos. Buried deep below Kansas’s golden prairies, the luxury condo complex was engineered with enough tenacity to withstand everything from epic solar flares to infectious pandemics. Built into an old missile silo, the condos feature a pool, movie theater, library, a live in orthodontist and doctor, and cement walls nine feet thick to protect occupants from something as threatening as an atomic blast.

The first wave of his indestructible, underground bunkers sold out almost immediately, and now he is well into construction on his second phase. I briefly spoke to Hall about his silo success and this is what he had to say, “Survival Condo’s success had been a long time coming,” he recalled of his sustained effort in engineering the facilities. “However, as soon as people came onsite and viewed the facility for themselves and realized it was not a hoax, but a fool proof survival getaway, they wrote checks immediately and bought their share of the property on the spot,” says Hall.

The condos are ranging in price from one million dollars for half a floor, to two million dollars for a full floor. The luxury hideout is fully sustainable and self-supportive; Hall is even installing an indoor farm with the hopes of growing fish and vegetables to feed seventy people for five years.

But most importantly the complex has a large water tank for optimal hydration, and an advanced military security system to keep the needy masses from pillaging the vital contents of the endurable fort.

While the depths of the underground offer perhaps the best protection from impending doom, sometimes such a destiny can seem a little claustrophobic when there is no exact end in sight. Weather permitting; a life at sea is a good Apocalyptic escape if the threat is land-dwelling.

Enter the new introduction of the ‘Osros Floating Island’ to the elite buyers’ market. While the floating island’s glorious amenities will astound and please even the most lavishly inclined aesthetic tastes, the island will also be largely self-sustaining for long term habitation.  Solar panels, a noiseless wind energy system and a system that recovers heat from seawater in order to fuel the ‘heat and air conditioning’ of the yacht are all included in the island to ensure this doomsday option will not compromise the owner’s homeostasis.

The inside décor of the floating yacht is oh-so-Miami chic, with hard wood detailing, pristine leather seating and turquoise lighting accents, freeing the owner to pretend they are on a beach vacation, and not escaping a flesh-eating pandemic.

To Infinity, and Beyond!

While both the land and the sea have their luxury benefits, some Apocalyptic escapers may want to just forget planet earth all together. In such a case, the Russian firm Orbital Technologies plans to open the first space hotel in humanity’s history in 2016. Also referred to as the ‘Commercial Space Station’ the hotel will float 250 miles above Earth, and can accommodate up to seven extremely wealthy galactic travelers at a time. However, drifting in the cosmos is not as effortless as it sounds, travelers will have to undergo a three month long training before embarking on their voyage.

However, although space is infinite, the amenities at this space hotel are not. The sealed capsule will not even have a shower and all food eaten will be chosen before the launch and sent to space in dehydrated form. For some, those accommodation options are a fate worse than death.

Regardless of your escape method, Armageddon plans should be considered with careful diligence, and executed with the utmost standards of luxury. Remember, the ninety-nine percent are going to be looking to you in times like these, best avoid their glares with a pair of designer shades, as you speed off in your armored vehicle to a brighter, and richer tomorrow.