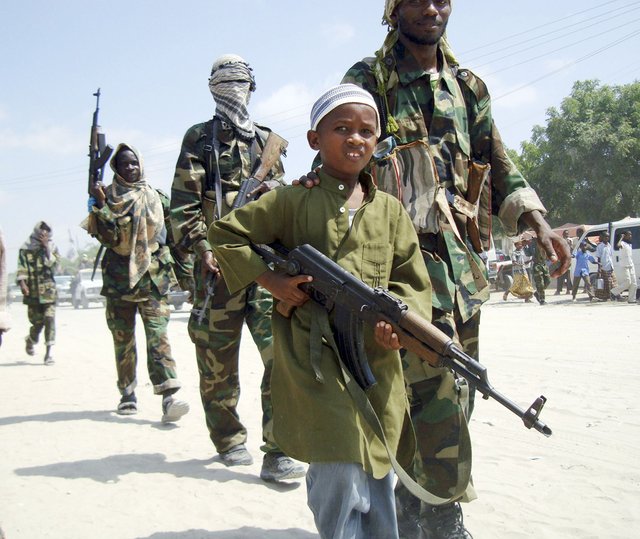 On its Web page, Human Rights Watch said governments using children as soldiers in armed conflicts are due to receive $200 million in U.S. military assistance in fiscal 2012 — only a portion of which are prohibited under the act.

“The Obama administration has been unwilling to make even small cuts to military assistance to governments exploiting children as soldiers,” said Ms. Becker. “Children are paying the price for its poor leadership.”

The White House referred questions about the waivers to the State Department, whose spokesman, Evan Owen, said the U.S. “is deeply committed to ending the abhorrent practice of unlawfully recruiting or using child soldiers.” Mr. Owen said the U.S. has made “a concerted effort to eliminate such practices around the world in a variety of ways,” including formal diplomatic messages to offending governments.

Mr. Bush never issued any waivers because provisions of the Child Soldier Prevention Act took effect after he left office.

Sen. Richard J. Durbin, Illinois Democrat, authored the original act. It prohibited, with a national-interest waiver, funds being used for military aid to countries identified by the State Department as having used or recruited child soldiers. Mr. Durbin argued during a Senate Judiciary subcommittee hearing considering the bill that enforcement was going to be difficult because many of the countries identified as using child soldiers were considered friends of the United States.

“We have to be very blunt with them, that cooperation will mean that they also forswear the use of child soldiers in their own countries. And if they fail to do so, they will pay a price, that the military assistance will be relegated to efforts to remedy this problem; and if they do not remedy it, then military assistance may be reduced or cut off,” he said at the time.

Durbin spokesman Max Gleischman said the senator is “not pleased” with the number of waivers issued by the Obama administration, but added that the White House has been “initially successful using the law as leverage to push countries, like Chad, to clean up their acts.”

Ms. Becker said that when countries are on the list for the third time and not making progress, “There is no excuse for a blanket waiver.”

Jesse Eaves, a policy adviser for children in crisis at World Vision, said every waiver “is basically saying we are going to use taxpayer money to support countries that use child soldiers.”

World Vision has said that children forced to fight in wars around the world have been used as front-line combatants, suicide bombers, minesweepers, sex slaves and spies. The organization said that more than 2 million children have been killed in conflict situations and 6 million have been seriously injured or permanently disabled.

“It is shameful that a portion of federal funding continues to help support governments who are abusing children,” Mr. Eaves said. “The worst part is that thousands of children around the world — not the politicians in the White House, on Capitol Hill or in the State Department — are the ones who will suffer.”