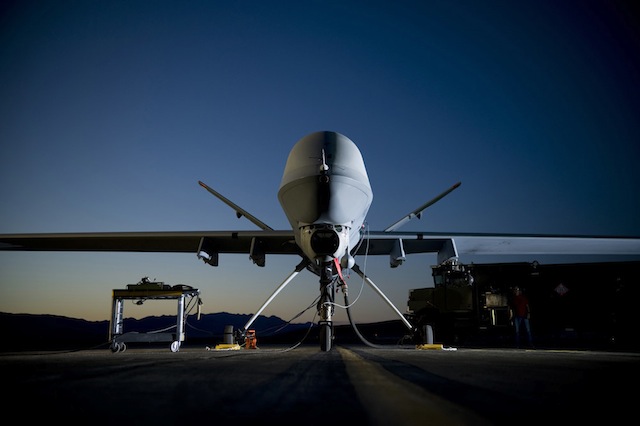 As long as the Air Force pinky-swears it didn’t mean to, its drone fleet can keep tabs on the movements of Americans, far from the battlefields of Afghanistan, Pakistan or Yemen. And it can hold data on them for 90 days — studying it to see if the people it accidentally spied upon are actually legitimate targets of domestic surveillance.

The Air Force, like the rest of the military and the CIA, isn’t supposed to conduct “nonconsensual surveillance” on Americans domestically, according to an Apr. 23 instruction from the flying service. But should the drones taking off over American soil accidentally keep their cameras rolling and their sensors engaged, well … that’s a different story.

“Collected imagery may incidentally include US persons or private property without consent,” reads the instruction (.pdf), unearthed by the secrecy scholar Steven Aftergood of the Federation of American Scientists. That kind of “incidental” spying won’t be immediately purged, however. The Air Force has “a period not to exceed 90 days” to get rid of it — while it determines “whether that information may be collected under the provisions” of a Pentagon directive that authorizes limited domestic spying.

In other words, if an Air Force drone accidentally spies on an American citizen, the Air Force will have three months to figure out if it was legally allowed to put that person under surveillance in the first place.

Not all domestic drone surveillance is that ominous. “Air Force components may, at times, require newly collected or archived domestic imagery to perform certain missions,” the Air Force concluded. Acceptable surveillance includes flying drones over natural disasters; studying environmental changes; or keeping tabs above a domestic military base. Even those missions, however, raise “policy and legal concerns that require careful consideration, analysis and coordination with legal counsel.”

The potential trouble with those local intelligence missions is once the drones’ powerful sensors and cameras sweep up imagery and other data from Americans nearby, the Air Force won’t simply erase the tapes. It’ll start analyzing whether the people it’s recorded are, among other things, “persons or organizations reasonably believed to be engaged or about to engage, in international terrorist or international narcotics activities.” Suddenly, accidental spying provides an entrance point into deliberate investigations, all done without a warrant.

And it doesn’t stop with the Air Force. “U.S. person information in the possession of an Air Force intelligence component may be disseminated pursuant to law, a court order,” or the Pentagon directive that governs acceptable domestic surveillance. So what begins as a drone flight over, say, a national park to spot forest fires could end up with a dossier on campers getting passed on to law enforcement.

All this is sure to spark a greater debate about the use of drones and other military surveillance migrating from the warzones of Iraq and Afghanistan back home. The Department of Homeland Security — which is lukewarm on its fleet of spy drones — is expanding its use of powerful, military-grade camera systems. And police departments across the country are beginning to buy and fly drones from the military. Now the Air Force’s powerful spy tools could creep into your backyard in a different way.

There’s an irony here. The directive is actually designed to make sure that Air Force personnel involved in surveillance don’t start spying on their fellow citizens. It instructs that “Questionable Intelligence Activities … that may violate the law, any executive order or Presidential directive” have to be reported immediately up the chain of command. But what’s most questionable might be the kind of local spying the Air Force considers legit.