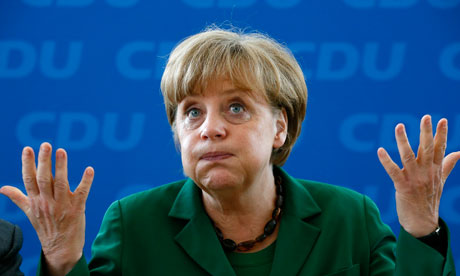 Europe’s 30-month effort to save the euro by slashing spending and debt levels risks turning into a crisis of political legitimacy after EU leaders’ strategies collided spectacularly with the wishes of voters in Greece and France.

The impasse was most graphically demonstrated when Germany’s chancellor, Angela Merkel, insisted Athens must comply with the stringent terms of its €130bn (£100bn) bailout even though more than 60% of the Greek electorate had voted for parties rejecting those terms.

“That’s just not on,” she told a Berlin press conference called to address the huge shift from right to left in France.

The first attempt to cobble together a new Greek government collapsed quickly when Antonis Samaras, the centre-right leader, called off negotiations. Greece appears to be on the brink of ungovernability as a result of a messy election triggered by the euro crisis. The stock market suffered its worse fall since 2008, losing as much as 8% of its value before closing 6.7% down. The country’s banking index was 13% lower.

Market analysts shortened the odds against the country’s chances of surviving in the single currency.

“The irresistible force of German austerity has clashed with the immovable object of Greek popular resistance,” said Tristan Cooper, sovereign debt analyst at Fidelity Worldwide Investment. “The eurozone’s weakest link just got weaker. Although it should be no surprise that Greeks are spurning the bitter medicine, the violence of the rejection is a shock. A Greek eurozone exit is now firmly on the cards.”

But Klaus Regling, the German head of the eurozone’s temporary bailout fund, warned that a return to the drachma would “be a catastrophe for Greece”.

In an election that saw the most spectacular collapse of big established parties in modern European democracy, the centre-right New Democracy and the centre-left Pasok mustered just over 30% of the vote between them, compared with almost 80% three years ago.

Samaras, the New Democracy leader, said he had “returned the mandate”, abandoning the attempt to construct a parliamentary majority. “We did whatever was possible,” he said.

The big winner, Syriza, a coalition of leftist radicals that came second, squarely blamed Merkel for the mess. “European leaders and especially Merkel have to understand that austerity policies have suffered defeat,” said its young leader, Alexis Tsipras.

After two years of prescribing austerity as the cure for the debt disease and establishing the legal instruments to entrench it, EU leaders have now switched to talking of growth strategies. They speak of the merits of growth, but are split on how to achieve it.

Both centrist leaders in Athens, Antonis Samaras of New Democracy and Evangelos Venizelos of Pasok, called for the bailout terms to be renegotiated, putting the commission, the International Monetary Fund, and the European Central Bank on the spot.

“We’ve said over and over that Greece should stay in the euro. But everyone has to carry their responsibilities. Solidarity is a two-way street,” said Amadeu Altafaj, spokesman for Olli Rehn, the euro commissioner. “Timely implementation of the programme is of the essence.”

That appears a tall order, though, with Greece apparently condemned to weeks or months of instability and the possibility of having to stage yet another election.

Merkel has her own electoral problems. After losing a regional state election on Sunday and facing a sterner test next weekend in the key state of North-Rhine Westfalia, she stuck to her hard line on fiscal rigouron Monday. But she was also generous towards Hollande, saying she would welcome him to Berlin “with open arms”. Hollande, who has never met Merkel, has said he will go to Berlin the day after he is sworn in, scheduled for next Tuesday.

With European politics flirting with meltdown as incumbent leaders are felled, the renewed air of emergency is generating heated language from senior figures, mainly directed at Merkel.

On Monday the former president of Latvia, Vaira Vike-Freiberga, argued that the EU was becoming both dominated and neglected by Germany.

“Is the Europe that is emerging from the euro crisis a German one? During the euro crisis, power in the EU seems to have shifted towards one national capital in particular, Berlin,” she wrote in Warsaw’s Gazeta Wyborcza, together with Portugal’s former European commissioner Antonio Vitorino. “Germany, it seems, is becoming a ‘geo-economic power’ driven by the needs of its export sector. By using economic means to pursue its foreign-policy ends, Germany is gradually turning its back on its European partners.”

The anti-German sentiment, which has Berlin worried, is echoed in a cri de coeur from Greece’s outgoing development minister and former European Commissioner, Anna Diamantopoulou, to Jacques Delors and Romano Prodi, two former commission heads, couched as an “SOS” to save Europe. Her letter, leaked to the Guardian, argues passionately that the austerity gripping Europe has reduced the union to quasi-wartime conditions. “It is like a war when a country loses 20% of its GDP in 18 months. It is like a war when we have the reappearance of rations in European capitals. It is like a war when millions of young people, the best and the brightest, leave their countries behind,” she wrote.

“Greece, Italy, Spain, Portugal, Ireland and even France are in the midst of a forest fire which is spreading alarmingly fast. The belief that such a fire can be stopped at national borders is misjudged. The European Council has been shrunk by the authority of its financial powerhouse, Germany.”