At Chernobyl no spent-fuel pools were destroyed. 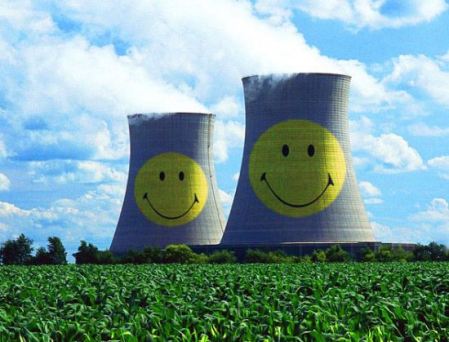 I wish everything I am reporting on were not true, or at least were less true than it appears. It does seem that Japan is in the process of contaminating the entire Pacific Ocean via continued uncontrolled releases of radioactivity at Fukushima. After low-balling initial estimates of radiation releases, the Japanese authorities now acknowledge that substantial amounts of radioactive material leaked from the crippled Fukushima Dai-Ichi reactors.[1]

The nuclear disaster in Japan has released radioactive isotopes that have poisoned the country’s soil, food, and water. The fallout is being rapidly taken up by living things and passed up the food chain with airborne radioactive isotopes reaching around the world but especially in the northern hemisphere where most of the radioactive particles will settle.

Most Americans have no idea what is happening. But within days of the accident at Fukushima radioactive contaminants were detected at monitoring stations in the Pacific Coast states. Nearly 1% of the “hot” sulfur released from the plant is estimated to have traversed the Pacific to reach southern California beaches.[2]

I don’t think anyone was really ever that happy about nuclear power and nuclear weapons but a lot of money and power were concentrated in the nuclear industry. Many of these people are riding around in limos today very happy with their luxurious lifestyle as the planet quickly becomes more contaminated.

Private companies are abandoning ship from the nuclear industry because the nuclear news is bad no matter how you look at it. And worse, others still in are headed for bad financial doom. According to a recent article in the New York Times, the operators of 20 U.S. nuclear reactors—including some with licenses that expire soon—do not have sufficient funding for prompt dismantling. If these reactors can’t keep working, their owners “intend to let them sit like industrial relics for 20 to 60 years or even longer while interest accrues in the reactors’ retirement accounts.”

Within the next 15 years as many as 100 industry-standard 900 MW nuclear reactors, concentrated in the “old nuclear” countries will have to be decommissioned, dismantled and made safe, which is impossible when it comes to nuclear plants and their dirty waste products. Human stupidity and arrogance has really boomeranged on us in the arena of nuclear power.

It is extremely difficult and painful to entertain the thought that the future of the northern hemisphere—and perhaps even the habitability of the entire planet—is being brought into question. I am not a lone wolf saying this anymore for the story has touched the edge of the mainstream.

The story of the nuclear waste pools was just published in the Huffington Post. I imagine many do read that publication and what they read there should shake people up pretty good.

Pools are 100 feet above the ground and are completely
open to the atmosphere because the reactor buildings were
demolished by explosions. The pools could possibly topple or collapse
from structural damage coupled with another powerful earthquake.
Huffington Post

“The urgency of the situation is underscored by the ongoing seismic activity where 13 earthquakes of magnitude 4.0-5.7 have occurred off the northeast coast of Japan between April 14 and 17. This has been the norm since the first quake and tsunami hit the Dai-Ichi site on March 11 of last year. Larger quakes are expected closer to the power plant,” continues the Huffington Post.

If an earthquake or other event were to cause this pool to drain, this could result in a catastrophic radiological fire that could wipe out most of the northern hemisphere; certainly it would be a massive civilization-breaking event some are suggesting.

Amazingly this is not the only nuclear situation going on. There is a new scare: 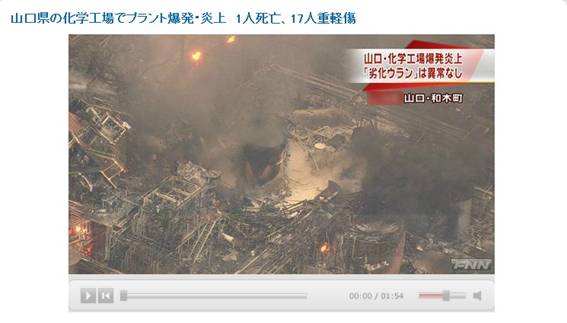 Two blasts at a chemical plant in western Japan killed one worker and injured at least 22 others on the 22nd of April. The explosions and fire occurred at a factory operated by comprehensive chemical manufacturer Mitsui Chemicals in Yamaguchi Prefecture, an official at Yamaguchi prefectural police said. The complex is still on fire, and supposedly 3379 units of radioactive waste(200L in each unit) and uranium for nuclear fuel are preserved in the site.

One of the two missing workers was found dead, nine workers injured, and three residents in the area were also injured (cuts from broken glass). The prefectural government does say the depleted uranium is stored at the complex, but there has been no release of toxic materials from the fire, according to the prefectural government. Some, on the other hand, are saying that a cloud of depleted uranium is heading towards Hawaii and west coast of the USA. How they would know that I do not know. Well we have had that before, when the government used depleted uranium in its middle-eastern wars, and no one said anything about it so why would we expect it to be anything different now?

Are we going to wait until the emergency departments are overwhelmed with patients suffering from radiation sickness before we begin to get alarmed? In reality we really have no idea what is actually going to happen since such events have never happened before—not like this.

Every toxic exposure increases people’s vulnerability to radiation. Toxic accumulation, whether from heavy metals, chemicals, pesticides, food additives or preservatives, etc., will each take their toll, weakening our resistance to, or ability to clear radioactive particles from, our bodies.

The human herd has already been vastly weakened by vaccines containing nasty preservatives and other chemicals. Our dentists have clobbered us with mercury fillings inches from our brains. The air is foul, the water is treated with poisons like fluoride, and many report that the air is full of chemtrails. The list is endless but especially telling is the tonnage of mercury put into the atmosphere each and every day by the coal-fired electrical plants of the world.

Britain’s most senior accident and emergency doctor told the The Telegraph that weeks of intense pressures had left casualty departments “overwhelmed” with patients. He said desperately sick people had been left for hours waiting on trolleys, with even those requiring intensive care enduring long delays. Dozens of National Health Service units have in Britain have cancelled surgery and clinics for outpatients. At least 10 major centers issued “black alerts”—the highest emergency warning—meaning they were at breaking point. For a large number of reasons it will not be long before modern medicine will be overwhelmed. Allopathic doctors will come up short not knowing what to do since pharmaceuticals just add more toxicity to the mix.

At Chernobyl no spent-fuel
pools were destroyed.

We all are just beginning to grasp that the danger. Technically it boils down to the fact that it’s the irradiated nuclear fuel stored in spent-fuel pools amidst the reactor ruins that are posing the greatest danger. I have people writing to me telling me that the problem is astronomically vaster than Chernobyl in both complexity and quantity of substances released and that the total amounts of radiation being reported are way too low. Here I am freaking out that we are at risk for something in the order of the 85 times the radiation of Chernobyl and I hear it could be much worse than that because of the plutonium factor.

I wrote Nuclear Toxicity Syndrome and the second edition of Iodine to address the radioactive dangers we face. We have not only ignored the heavy metal and chemical situation but also radiation exposure—all this adding up to a hugely perilous predicament.