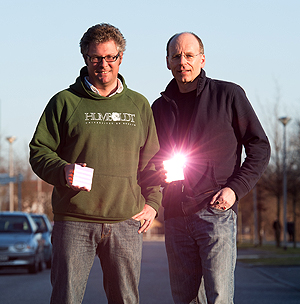 (L-R) Associate Professor Tim Schmidt and his research partner Dr Klaus Lips at the Helmholtz Centre for Materials and Energy have made a breakthrough in solar cell technology. [Image: HZB/Philipp Dera]

Low cost solar cells suitable for rooftop panels could reach a record-breaking 40 percent efficiency following an early stage breakthrough by a University of Sydney researcher and his German partners.

With Australian Solar Institute support, Associate Professor Tim Schmidt from the University’s School of Chemistry, together with the Helmholtz Centre Berlin for Materials and Energy, has developed a “turbo for solar cells”, called photochemical upconversion that allows energy, normally lost in solar cells, to be turned into electricity.

The finding has been published in the Energy & Environmental Science journal.

Associate Professor Tim Schmidt said using the upconversion technique, a process which harvests the part of the solar spectrum currently unused by solar cells, eliminates the need for costly redevelopment of solar cells.

“We are able to boost efficiency by forcing two energy-poor red photons in the cell to join and make one energy-rich yellow photon that can capture light, which is then turned into electricity,” Associate Professor Schmidt said.

“We now have a benchmark for the performance of an upconverting solar cell. We need to improve this several times, but the pathway is now clear.”

“Together, Australia and Germany can accelerate the pace of commercialisation of solar technologies and drive down the cost of solar electricity,” Mr Twidell said.

“That’s why the Australian Solar Institute is supporting collaboration between the two countries through the Australia-Germany Collaborative Solar Research and Development Program.”

The Australian Solar Institute is a $150 million commitment by the Australian government to support the development of photovoltaic and concentrating solar power technologies in Australia.