The last time a story of Tungsten-filled gold appeared on the scene was just two years ago, and involved a 500  gram bar of gold full of tungsten, at the W.C. Heraeus foundry, the world’s largest metal refiner and fabricator. It also became known that said “gold” bar originated from an unnamed bank. It is now time to rekindle the Tungsten Spirits with a report from ABC Bullion of Australia, which provides photographic evidence of a new gold bar that has been drilled out and filled with tungsten rods, this time not in Germany but in an unnamed city in the UK, where it was intercepted by a scrap metals dealer, and was supplied with its original certificate. The reason the bar attracted attention is that it was 2 grams underweight. Upon cropping it was uncovered that about 30-40% of the bar weight was tungsten. So two documented incidents in two years: isolated? Or indication of the same phenomonenon of precious metal debasement that marked the declining phase of the Roman empire. Only then it was relatively public for anyone who cared to find out on their own. Now, with the bulk of popular physical gold held in top secret, private warehouses around the world, where it allegedly backs the balance sheets of the world’s central banks, yet nobody can confirm its existence, nor audit the actual gold content, it is understandable why increasingly more are wondering: just how much gold is there? And alongside that – while gold, (or is it GLD?), can be rehypothecated, can one do the same with tungsten?

ABC Bullion received the following email from one of our trusted suppliers this week.

Attached are photographs of a legitimate Metalor 1000gm Au bar that has been drilled out and filled with Tungsten (W).

This bar was purchased by staff of a scrap dealer in xxxxx, UK yesterday. The bar appeared to be perfect other than the fact that it was 2gms underweight. It was checked by hand-held xrf and showed 99.98% Au. Being Tungsten, it would not be ferro-magnetic. The bar was supplied with the original certificate.

The owner of the business that purchased the bar only became suspicious when he realized the weight discrepancy and had the bar cropped. He estimates between 30-40% of the weight of the bar to be Tungsten.

This is very worrying and reinforces the lengths that people are willing to go to profit from the current high metal prices. Please be careful. 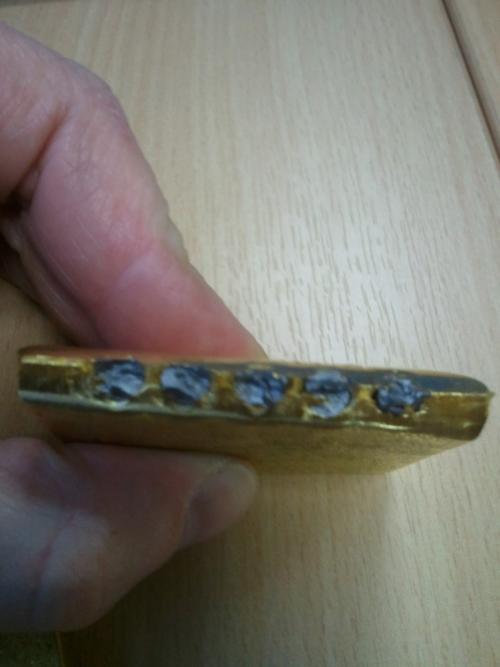 Two halves of the cropped bar: 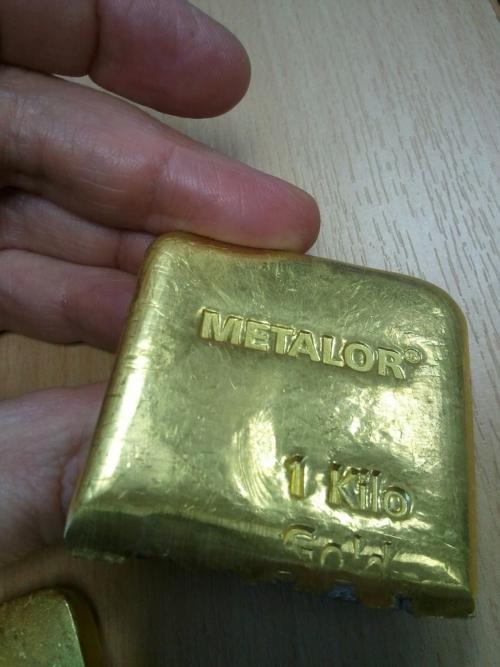 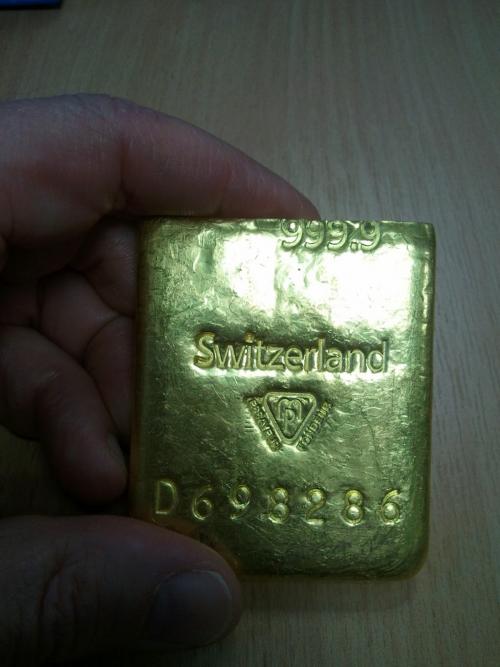 Finally, some observations from Paul Mylchreest on debasement:

Let’s consider the run-up to Rome’s hyperinflation. I think this comment from jaysromanhistory.com “Good Money, Bad Money, and Runaway Inflation” resonates with what’s happening in the US today:

“Severus Alexander (AD 222-235) tried to reform by going back to the denarius but, once started, this path of runaway inflation and financial irresponsibility on the part of the imperial government proved impossible to control.”

It also seems that the hyperinflation was preceded by some kind of banking crisis, which is an interesting parallel. From “Demise and Fall of the Augustan Monetary System” by Koenraad Verboven:

“Papyri show it was common for private individuals to deposit money at a bank and to make and accept payments through bankers.Bankers in the west disappear from view around the middle of the 3rd c… A famous papyrus from Oxyrhynchus from 260 CE shows exchange bankers closing in order to avoid having to change the ‘imperial money’. The strategos ordered the exchange bankers to reopen and accept all genuine coins and warned businessmen to do the same. In 266 CE we find for the first time transactions being expressed in ‘ptolemaeic’ or ‘old silver’ as opposed to ‘new silver’.”

The chart shows how inflation remained relatively subdued until a tipping point was reached in the late- 260s A.D Monetary systems can absorb substantial abuse before there is a dramatic impact on the price level. For example, the debasement of the coinage was already accelerating in the early part of the third century A.D., before plunging in the latter part. Indeed, the chart below (apologies for the quality) only shows the trend up to 253 AD. By around 290 AD, the coins were only dipped in silver to give them a coating (<0.5%): 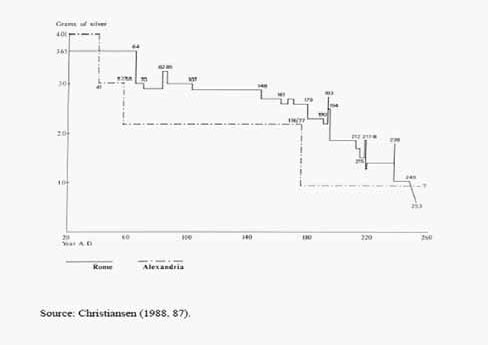