As the S&P 500 reaches new multi-year highs and VIX touches multi-year lows, there is one rather large and risk-appetite-proxying market out there that is not as excited. The high-yield bond market has seen record in-flows dropping off recently and for the last four-to-six weeks high-yield spreads, yields, and bond prices have been very flat as stocks have surged ahead. Despite US earnings yields at near-record highs relative to high-yield bond yields, we see little pick-up in LBO chatter suggesting a notable preference for higher-quality junk credit (and/or lack of belief in sustainability of earnings yields) and the recent ‘dramatic’ outperformance in investment grade credit is a notable up-in-quality rotation (as well as early spread-compression reaction to Treasury weakness recently) that strongly suggests less risk appetite among real money managers (given how ‘cheap’ high-yield appears across asset classes). Lastly, the ratio of HY bond prices to VIX is near its extreme once again, something we saw occur before the risk flares of 2010 and 2011 surrounding the end of the Fed’s QE sessions.

The S&P 500 (Blue line) has stormed higher from its October lows and extended gains recently despite signals that QE3 may not be so imminent. Investment grade credit (dark red) has pushed higher with it as size and quality was preferred (and the last week or so of outperformance likely reflects the initial spread compression impact as Treasuries blew higher in yield but corporates remained bid from safety up-in-quality rotations). What is most clear is the HYG (green line) and HY (red line) have flat-lined in the last 4-6 weeks while stocks have accelerated. We have seen this pattern before and the old saw that ‘credit anticipates and equity confirms‘ has been extremely useful a number of times over the past few years. 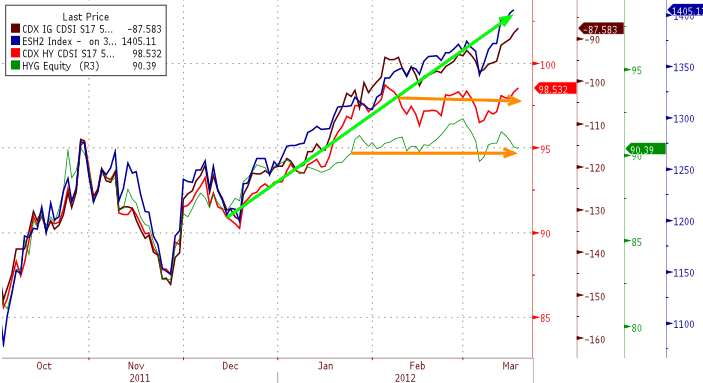 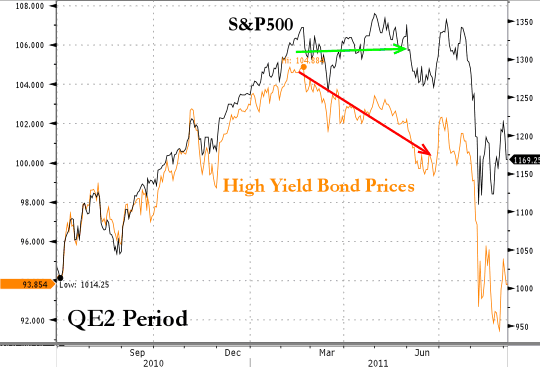 There are plenty of technical reasons for why HY may be struggling including negative convexity at such low yields but the slowing flows and relative decompression far outweighs the stickiness of bond prices and their callability here.

Furthermore, the ratio of HY bond prices to VIX has soared to record ‘risky’ highs strongly suggesting that either VIX is set to rise notably, high-yield bond prices are set to fall notably or both and these extremes have tended to occur in the lead ups to notable risk flares (around Fed implicit easing periods). 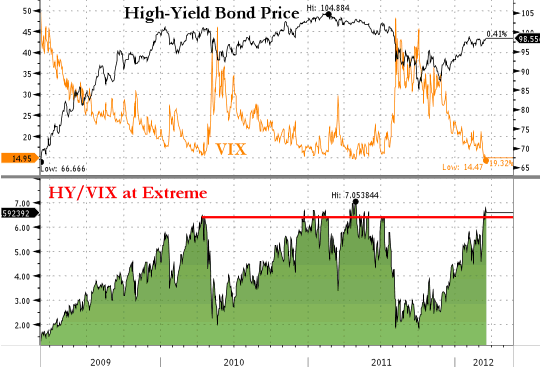 While not perfectly fungible, VIX and HY represent risk premia for extreme downside protection and there is clearly a major disconnect. Using longer-dated Volatility we get a better more realistic perspective between the two markets – once again confirming that short-dated enthusiasm is at extreme levels as even with modest rises in VIX we see the term structure steepening today.