And she has an interesting name: 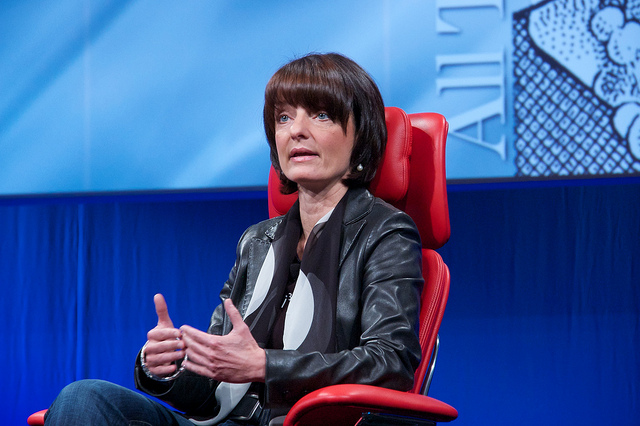 Darpa director Regina Dugan will soon be stepping down from her position atop the Pentagon’s premiere research shop to take a job with Google. Dugan, whose controversial tenure at the agency lasted just under three years, was “offered and accepted at senior executive position” with the internet giant, according to Darpa spokesman Eric Mazzacone. She felt she couldn’t say no to such an “innovative company,” he adds.

Dugan’s emphasis on cybersecurity and next-generation manufacturing earned her strong support from the White House, winning her praise from the President and maintaining the agency’s budget even during a period of relative austerity at the Pentagon. Her push into crowdsourcing and outreach to the hacker community were eye-openers in the often-closed world of military R&D. Dugan also won over some military commanders by diverting some of her research cash from long-term, blue-sky projects to immediate battlefield concerns.

“There is a time and a place for daydreaming. But it is not at Darpa,” she told a congressional panel in March 2011 (.pdf). “Darpa is not the place of dreamlike musings or fantasies, not a place for self-indulging in wishes and hopes. Darpa is a place of doing.” For an agency that spent millions of dollars on shape-shifting robots, Mach 20 missiles, and mind-controlled limbs, it was something of a revolutionary statement.

The shift was only one of the reasons why Dugan was a highly polarizing figure within her agency, and in the larger defense research community. The Pentagon’s Office of Inspector General (OIG) is also actively investigating hundreds of thousands of dollars’ worth of contracts that Darpa gave out to RedX Defense — a bomb-detection firm that Dugan co-founded, and still partially owns. A separate audit is examining a sample of the 2,000 other research contracts Darpa has signed during Dugan’s tenure, to “determine the adequacy of Darpa’s selection, award, and administration of contracts and grants,” according to a military memorandum.

Results of the inspector general’s work haven’t been released. And the work had “no impact” on Dugan’s decision, according to her spokesman, Mazzacone. “The only reason” she decided to leave the Pentagon was the allure of working at Google.

“Dr. Dugan’s departure is not related to an OIG investigation,” Lt. Col. Melinda Morgan, a spokesperson for the Office of the Secretary of Defense, adds in a statement. “The OIG conducts regular audits of Defense agency contracts and ethics programs; as a Defense agency, this includes Darpa.”

“In the spring, questions were raised over whether it was appropriate for Darpa to have funded a proposal submitted by RedXDefense, particularly in light of the Director’s continuing interest in this closely held small business,” Morgan says. “In response, the Department reviewed the processes in place at Darpa to ensure that those processes would ensure integrity and public confidence.” That review — separate from the OIG’s ongoing audits — found that Darpa and its chief’s actions “were consistent with the letter and spirit of relevant laws, regulations, and policies governing conflict of interest.”

Dugan is expected to depart “sometime in the next few weeks,” Mazzacone notes in an email. Darpa deputy director Kaigham “Ken” Gabriel, who has overseen the agency’s day-to-day operations since mid-2009, will serve as the acting Darpa chief. He’ll certainly be a strong contender for the permanent position, as will Lisa Porter, the head of the Intelligence Advanced Research Projects Activity — Darpa’s counterpart in the intelligence community.

In the meantime, the Pentagon’s leadership are hailing the first female director of its most important research agency. “Regina Dugan’s leadership at Darpa has been extraordinary and she will be missed throughout the Department,” Frank Kendall, Acting Under Secretary of Defense for Acquisition, Technology and Logistics, says in a statement. “We are all very grateful for the many contributions she has made in advancing the technologies that our war fighters depend on. She leaves for an exciting new opportunity and we wish her every success.”